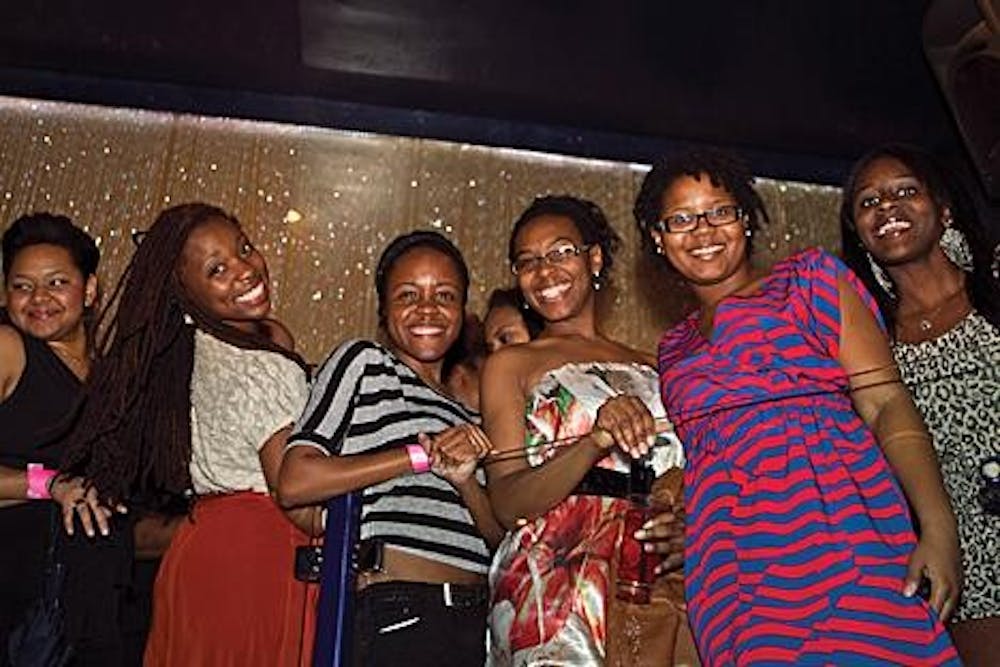 Senior girls are all smiles at the celebration on Feb. 2.

Around 800 people poured into Red Door and Wonder Bar during 100 Days on Feb. 2 in celebration of the upcoming commencement.

One student, however, was injured before she even left campus.

During a shuttle pick-up around 10:45 p.m., the student, who declined to comment for this story and asked to remain anonymous, was knocked down by the crowd while trying to get on an approaching bus and could not get up before the bus drove over her foot.

"Some people pushed [the injured student] too close, and her foot got hit," another student, who witnessed the incident and also asked to remain anonymous, said. "Then, they stepped over her to continue boarding the bus."

The witness said he attributed the accident to poorly organized transportation and student intoxication.

"They had buses for 50 people, but there were over 100 trying to get in because they didn't want to wait 15 minutes for another bus," he said. "To be honest, everybody was pretty drunk and acting irrationally."

The witness said he believed that the organizers should have asked more people to take the METRORail because it was a quick commute and only a four- to five-block walk. He said that more buses could have helped as well.

The committee is addressing the transportation concerns for next year by creating a more formalized process, Rice Annual Fund Assistant Director Megan Peet, the staff liaison for 100 Days, said. This may include having RUPD at the loading zone or line-up areas for each bus.

According to Peet, the cost of transportation increased from last year because the committee wanted as many people as possible to attend. Consequently, shuttle buses were hired to drive students back and forth from the event around every 15 minutes.

Overall, crowding was not a major concern, with the exception of the dance floor toward the middle of the night, Peet said. She said they expected that spacing constraints would push more people into Wonder Bar, but that this did not actually end up being the case.

Peet said the committee started planning the event after Senior Toast and chose Red Door and Wonder Bar as the venues over last year's Rich's Nightclub because these linked clubs were able to accommodate the large increase in the student population. The search for a new venue presented a challenge because they had to build new relationships with each venue owner and vendor, she said.

"My favorite part was the point at which we signed the contract for Red Door and Wonder Bar because I knew they were the two hottest and most unique spots in Houston," Alfaro, a McMurtry College senior, said.

The party's music was handled by two volunteer student DJs, mechanical engineering and material sciences graduate student Parker Eason and Will Rice College sophomore Vivaswath Kumar. Tickets were $10 for seniors and $15 for everyone else. Peet said the committee was pleased to see a surge in ticket demand two days before the event.

At the beginning of the party, the committee decided to close Red Door and leave only Wonder Bar open until more people arrived at the event, according to Peet. Once Red Door was opened, more people went to that venue, leaving plenty of space in Wonder Bar, she said.

"The venue started to fill up, and I could tell people were getting excited for the night to come," Jeng, a Lovett College senior, said.