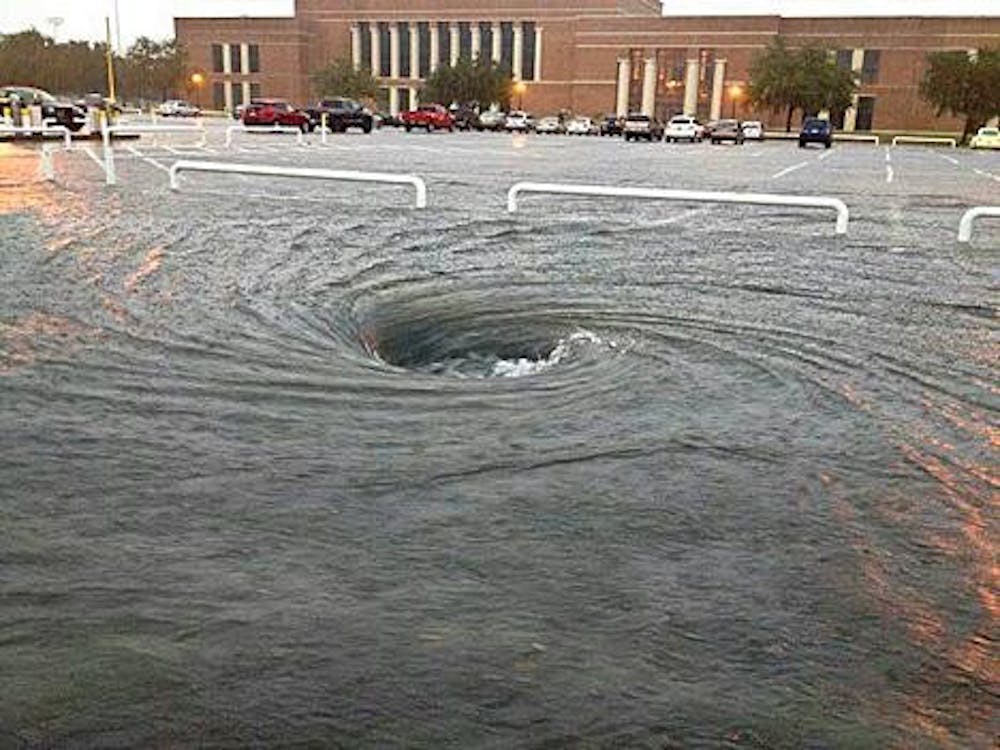 Students walking to their first classes of the new year had to get past more than just their snooze buttons. According to weather data on the university website, Rice's campus received 4.98 inches of rain Monday, flooding roads and parking lots in and around the university.

The university sent a message over the emergency notification system at 10:01 a.m. to warn students, faculty and staff that roads on and around campus were flooding and that they should avoid travel until the water subsided.

"At the point that we saw our vehicles could not move around safely, we let the community know," Rice University Police Department Interim Captain Clemente Rodriguez said. "We wanted to make sure that we waited until the drainage could catch up with the weather."

Vice President for Administration Kevin Kirby said the university did not want students trying to drive through high standing water to come on campus.

Kirby, who is chair of the university's crisis management team, said the decision to use the emergency notification system was made based on the recommendation of Rodriguez.

Rodriguez said he had officers checking sections of the road where high water is common during heavy rainfalls and that some officers opened a few of the campus's gates on University Boulevard to allow cars which could not move along the road to move to higher ground.

"I think we did what we could as far as getting the alert out as soon as we were aware that there were flooding issues," Rodriguez said. "I think sometimes we're at the mercy of Mother Nature when these types of incidents occur."

Transportation Manager Elizabeth Gbordzoe said the shuttle service was paused from 10:20 a.m. to 12:43 p.m. after RUPD alerted the Transportation Department of the flooding in the inner loop.

According to Kirby, the university has made improvements to its drainage systems, and the only major upgrade that remains to be made is to a storm sewer on Alumni Drive for which the university has applied for a FEMA grant. Kirby said that the rate at which water can drain from campus is limited by Houston's drainage mechanisms.

"The problems for the most part are not on campus but where the water is going," Kirby said.

A second message was sent out over the emergency notification around 1 p.m. to alert the Rice community that the water had subsided and that there were several stranded cars blocking Entrance 8.

Kirby said that because of last year's drought, the soil settled differently, which contributed to water from the flood getting into several basements, but he noted that as far as he knew, no basement experiments were damaged by the flood, and there was no major damage to any of the basements. Rodriguez added that there had been no reports of serious damage on campus, though he said the water was high enough that a lot of cars took water in.

Jones College senior Shawdon Molavi said he and a few friends put on their swimsuits, grabbed some beers and went out to West Lot after he heard that it had been flooding to check on his car. Molavi said his car was fine, but that he saw eight or nine cars abandoned on the intersection of Stockton and University Boulevard by the police station.

"The water was about knee-high, and a lot of people had pulled up onto the yards along University," Molavi said. "A guy's tires were stuck, so we helped get them unstuck and on the sidewalk."

Molavi said that, despite the deep water, he still saw some cars go through the intersection and that people who had abandoned their cars in the deep water started coming back to try to move them. He and his friends helped push cars that could be moved, Molavi said, but some of them had electrical damage and couldn't be put in neutral.

Rodriguez said that he had not gotten any reports of injuries due to the flooding, but that in general, driving and walking in flood conditions is not advisable, since there may be sudden changes of depth which are not observable from above.

"I never try to drive through high water myself. It's not worth the risk," Rodriguez said. "Even walking through the high water, you have to be careful."