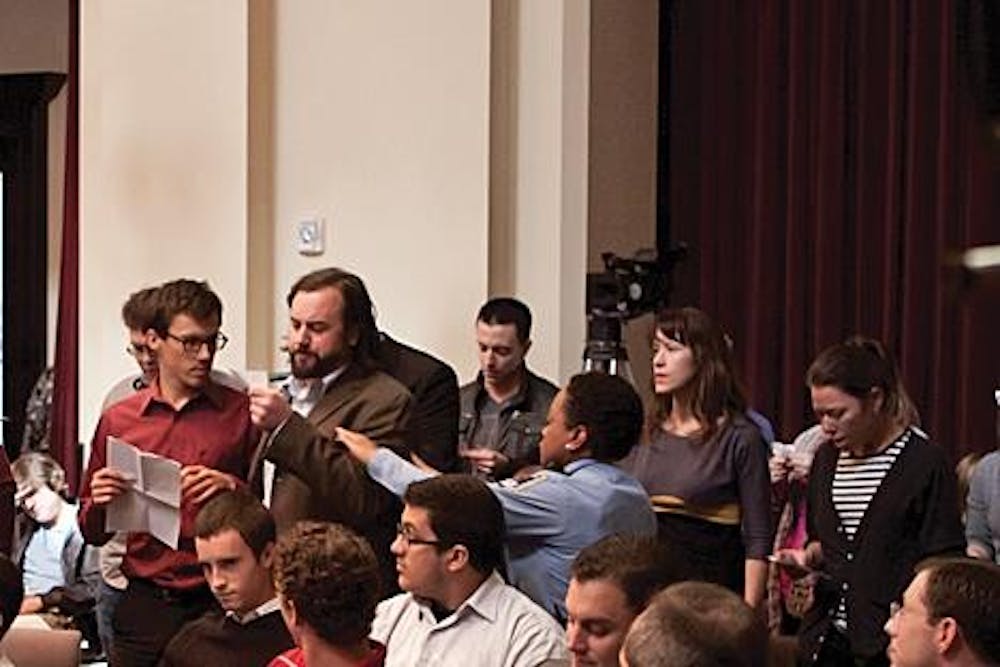 House Majority Leader Eric Cantor visited the James A. Baker III Institute for Public Policy last Thursday to discuss his views on the American dream and answer questions from students in an open forum.

Following a brief introduction by President David Leebron, a group consisting of Rice University students and other protesters stood up and chanted using a "mic check" style of repetitive speech, characteristic of the Occupy Wall Street protests.

"We find it an outrage to welcome Eric Cantor," one protester yelled to the crowd, with the rest of the protesters repeating after him. After several minutes of chanting, Rice University Police Department officers escorted the protesters, estimated at around 20 in number by this reporter, out of the Baker Institute.

All attendees were required to show their university identification or media credentials for entry into the event.

"Free speech does not include the right to interfere with the expressions and ideas with which you disagree," Leebron said over the chanting protesters. "You will be willfully escorted away for not respecting the fundamental principle of free speech within the university."

"Only in America," Cantor said after once again taking the stage.

Cantor began his speech by warning that American politics are heading in the wrong direction and that we need to identify problems and figure out solutions to those problems.

"Too often, our politics and our government have become obstacles to American progress and prosperity," Cantor said.

Cantor recalled the story of his family coming to America as an example of what it means to be American. Cantor said his grandmother lived in a country where she was restricted by religious persecution.

"My grandmother faced a future where no matter how hard she worked or how smart she was, she faced limits," Cantor said. "Our country isn't like that; it must never be. America offers immense and authentic opportunities."

Cantor also made a distinction between equality of opportunity and equality of outcome, stating that the former is what America has always been, but that the latter is what the nation is becoming.

"There is a ladder of success in America," Cantor said. "However, it is a ladder built not by Washington, but by hard work, responsibility and the initiative of the people of our country. How quickly you move up the ladder, or sometimes down, should be up to you."

Cantor said much of the current political debate has been focused on fairness in society. Republicans, Cantor said, believe in "hand-ups," not handouts.

Cantor recognized that not all individuals are born into the same circumstances.

"I was recently asked, ‘What does your party say to a nine-year-old inner-city kid scared to death growing up in a life of poverty?'" Cantor recalled. "We know there are no easy answers, but that child needs a ‘hand-up' to help her climb the ladder of success in our country."

Cantor elaborated that the child would also need the guarantees of having a fair shot in life, family and community support, and a sense of stability.

"The question for us is, ‘How can we help provide it?'" Cantor said. He said stability could start in the schools and voiced his support for more charter school options and accountability in schools.

In addition to education, Cantor shared his views on the economy and small businesses.

"In America, starting a business isn't something that's just possible; it's something expected," Cantor said. "However, today that is now being questioned. People have become afraid to take a risk."

Cantor cited a loss of optimism and frustration that stems from an uneven playing field. He said that there are those who want to divide America by turning those making less against those making more.

"The truth is, Washington needs to stop taking the income of hardworking American taxpayers and instead start rewarding their success," Cantor said.

Citing the $14 trillion debt, Cantor called for an end to tax increases and advocated for doing more with less money. He also said the most successful must extend their creativity and generosity to build community infrastructures.

"The key to economic empowerment is ensuring income mobility," Cantor said. Through helping get the unemployed back to work, encouraging startups, and encouraging the best and brightest to stay in America, he said income mobility could be achieved.

Next, Leebron opened up the floor to student representatives' questions.

Cantor addressed two questions regarding the state of American universities and cuts in education spending by promoting public-private partnerships and research grants. Cantor also acknowledged that tough decisions regarding spending must be made and that a possible solution would be centralizing research grants for easier prioritization.

Cantor replied that taxes should not go up for anybody and should be a priority for Washington.

Cantor responded that the courts might have to resolve lawsuits but that such an amendment would provide a check on government spending. He said that since Americans and most states must live within their means, the federal government should also be required to do so.

Leebron then opened the floor to all students' questions.

Cantor replied to a question regarding what the Republican Party would be willing to increase taxes for by asking about our country's priorities.

"Obviously national defense and the security of our country come first, or we won't have a country," Cantor said. "How are we going to lead and be the world superpower we are if our economy isn't strong?"

To view a video of the entire speech, click here (courtesy of C-SPAN).