Chefs turn up the heat for culinary competition 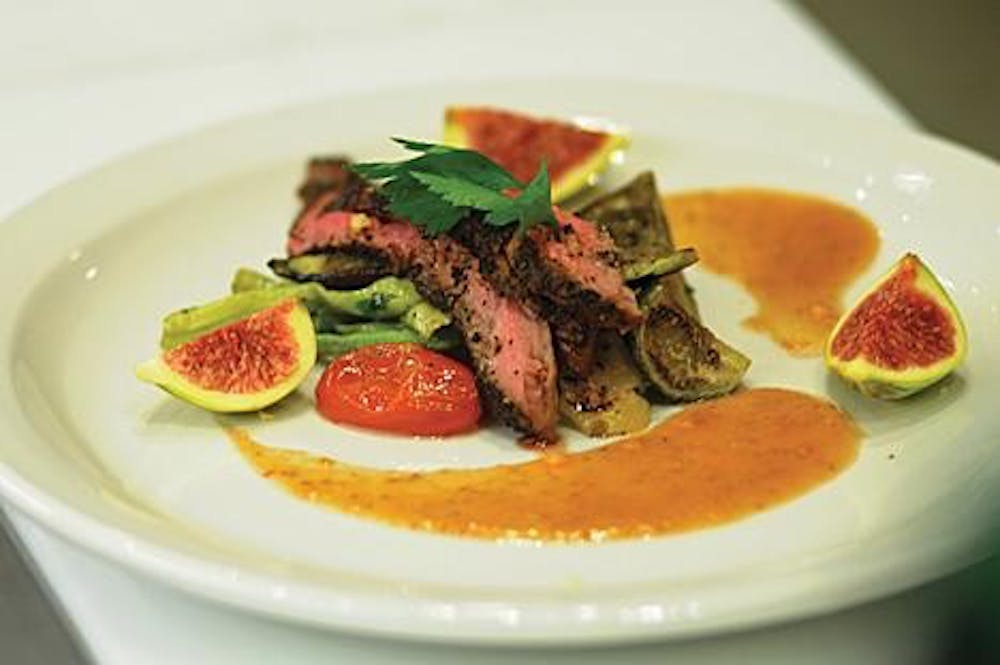 President and Founder of Keeper Collection Diane Dixon said she was excited to be partnering with Rice for Chefs Under Fire's third year.

One of Rice's South Servery cooks, Anthony Elumn, took to the burners at East Servery for the competition.

Competitors were given 70 minutes to prepare, cook and plate one dish they had to come up with on the spot.

A viewing area was set up to one side of East Servery where guests could watch the competing chefs prepare and cook their meals. The normal serving areas were converted into preparation stations so that viewers could get up close to the chefs. Outside vendors prepared tables with free food. Whole Foods Market brought several items from its catering menu including a fruit plate, wraps, and a cheese selection.

Grateful Bread had samples of several types of sausage, mustard and bacon while Korma Sutra gave out samples of its Indian Fusion cuisine.

Four mystery ingredients were revealed at the beginning of the competition — sirloin flap steak, Katz coffee, heirloom eggplants and Chinese long beans. The chefs were required to use the steak but only had to use one out of the three other ingredients, although they could choose to use them all.

"I'm curious to see how they are going to prepare a dish with a challenging piece of protein [the sirloin flap steak]," celebrity guest judge Hugo Ortega said. "It must be cooked at the perfect temperature."

Celebrity guest judge Monica Pope said the ingredients were a good mix. She said that she personally does a Katz Coffee rub and loves heirloom eggplants — a Farmer's Market epiphany for her, she said — but the long beans could be tricky.

"The long beans could be interesting," Pope, executive chef and owner of T'afia, a restaurant located in midtown Houston, said. "A lot of people don't know what to do with them. Do you keep them long or cut them up?"

The contestants were allowed to bring four other ingredients of their own that they could choose to incorporate into the dishes. Examples of these ingredients were Wong's Cap'n Crunch Cereal, Lee's striped tiger figs, Elumn's honeydew melon and cucumber and Chavez's woodchips.

"Mine were totally random," Elumn said. "I tried to pick things that would go with different ingredients."

Elumn said that despite practicing mixing different ingredients together, he was still very unprepared for the contest.

"The biggest problem was running back and forth," Elumn said. "I'd come back to prepare something and forget about a stove and it would get too warm."

Pope agreed that it is not the actual cooking that is the hard part but being under so much pressure that really affects contestants.

"What is hard is that you're under pressure and all the curve balls," Pope said. "They give you the ingredients and you're like, ‘Wait I haven't used that before.'"

Even though he did not win, Elumn said that he enjoyed competing in Chefs Under Fire.

"I didn't expect to win because I was up against