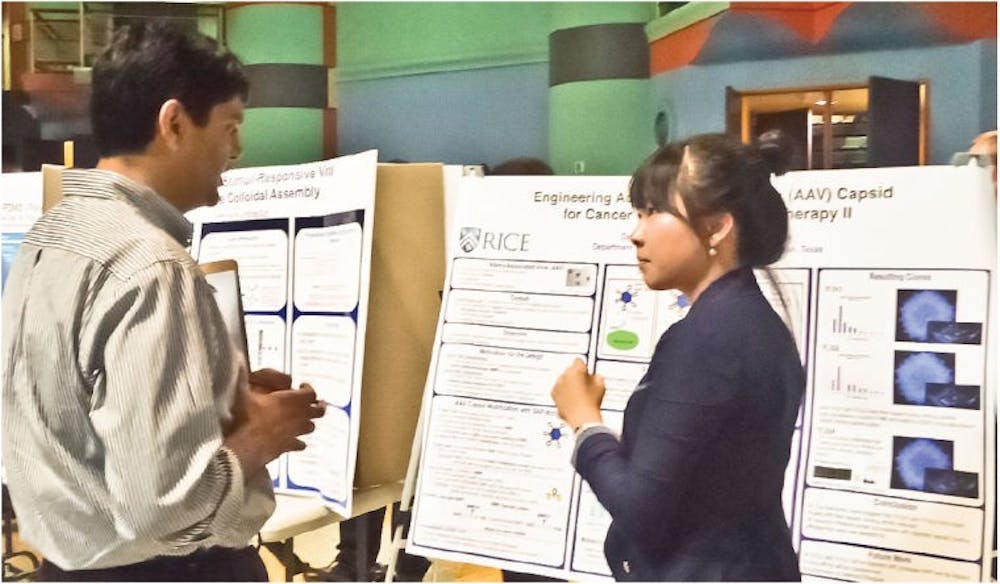 • First time Lindsay ever "received affirmation for not just being a consumer of knowledge, but actually a producer of knowledge" in his Chaucer class senior year — "that's what we celebrate today — the work that you guys have done."

• "The reason why undergraduate research matters is because it affects you and also affects our world. How does it affect you? It's probably the first major time when you move from the process of absorbing information that is coming at you."

• Lindsay discussed the characteristics of good researcher through examples of researchers he admired, such as Dr. Francis Collins, whose humble demeanor impressed him.

• Lindsay talked about how his life was changed by research — it led him to consider a specialization in sociology, and eventually apply to Rice for job.

• "Research has been a critical part of my own journey, my hunch is that it will be for you as well. The reason why we do research is not to make ourselves look good, and not to get a name for ourselves ... The work that we do matters because it's how our world improves."

This year, my role as a coordinator was a little different from previous years, because my main goal was to pass on the Symposium to Ben Chou, as well as the other underclassmen coordinators.

The Office of Fellowships and Undergraduate Research, particularly Caroline Quenemoen and Abby Schuh, [has been] incredibly supportive of RURS. They do their best to help visualize the vision of the student coordinators.

I was very proud that the event was able to expand this year. This is the first time where we had to utilize three venues: Farnsworth, Grand Hall, and Duncan Hall. We had projects from architecture as well as a musical performance from the Civetta Quartet at the RURS Reception hosted by the Office of the Provost and Dean of Undergraduates. This just demonstrates that undergraduate research at Rice is increasing, and the culture of research is further reinforced.

Other than that, I think that the event went smoothly. I'm happy with the final outcome and hope that it provided students a forum through which to communicate their work and engage those around them in dialogue.

There was a great turnout, in terms of audience. Last year, everything was concentrated in the RMC. This year we changed it around — we added a reception ... compared to last year, we actually moved a section of RURS outside of the RMC to Duncan Hall. And part of the reason was because of Owl days. We wanted to show prospective students that it's a great opportunity, to come and do research at Rice and it's one of the big reasons why a lot of the students do choose Rice.

As a coordinator for the Rice Undergraduate Research Symposium, I focused on reviewer recruitment and matching with student presentations. For the day of the event, I was responsible for overseeing the engineering division of the symposium, which took place in Duncan Hall.

RURS went extremely well. We had over 180 students present their research and it was very rewarding to see months of planning culminate into a successful event.

I definitely plan on participating as a coordinator again next year! It was a great experience and lots of fun. I really enjoyed working to showcase the exciting research that is going on at Rice across all disciplines, and I am looking forward to next year?s symposium already.

Overall impression of RURS: It was a little crowded. It would be nice to space out more since you had so many presenters. Still, I liked how it was not overrun with posters. I could talk to everyone. The most intriguing part was that everyone was genuinely excited about what they're doing. They all seemed to have a good idea of why they're doing what they're doing, without just focusing on the nit-picky technical aspects. Maybe it's because RURS is more of a volunteer thing. People want to be here in the first place.

Favorite unconventional part of RURS: The last person I reviewed looked very familiar. We found out that I'd reviewed her last year too. Last year, I also won a gift card, so I feel like I'm very lucky at these.

Favorite part of RURS: I really like judging. I think it is a good way for graduate and undergraduate students to interact. It's formal and informal, and we can talk to undergraduates and show that we're not scary grad students – bitter, but not scary. On a tangent, it's nice to see what other grad students in the department are doing through these undergraduate presentations. It's good to see so much research at the undergraduate level. Everyone at Rice always harps on that.

Overall impression: It is a good experience. Even at large conferences that have poster competitions, you're going to have issues with space. Having everything divided by discipline and schools was very helpful.

Suggested improvements: I wish there was some way to highlight presentations that are publishable, the ones that are a significant contribution rather than just a limited analysis of data that already exists. I would also like for there to be a way for judges to give more praise for projects that deserve it. It'd also be nice to see this expand from poster presentations to a conference with paper presentations, guest presenters, and things like that – which I think is totally doable. It's important that it stays an undergraduate event though.

Most interesting project: There was a study on professional sports that raised questions about college sports. Two of the presenters were athletes who drew from personal experience. I was a college athlete and have my own opinions about pro sports and college sports.

Overall impression: It's a really good experience for undergraduates in general, talking to other students and judges. My favorite part is that it's really laid back. The removal of prizes, which they offered before, has made the entire thing more laid back and less competitive. I like the feel of this a lot better. My only negative experience is that I had to come back for one of the judges because there was a slight mix-up with the judging, and I had three judges even though I was only supposed to have two. Overall, my judges gave really good advice not only about my poster but also about tools I could use and how I could do future work. They gave good feedback and were really encouraging.

Overall impression: Overall, it was good. You can't really do much better with the space available. I felt comfortable. What happened, is there was a large influx of people and people who were not needed then left. I wish more people outside of faculty and students had come through. I think in the future there should be more advertising to people not involved. A lot of my friends at Martel had no idea this was going on. A lot of people want to support their friends. This event could've used a few more advertisements, fliers and posters. We got listserve emails, but no one really reads those.

Suggested improvements: I would've personally liked RURS to be a little later in the year because I had some incoming test results I wanted to get before presenting, but I know that the event can't be later because of finals and such.

Background: I presented on the research I'm doing at UT Medical School, which is studying mutations that cause aortic aneurysms. I also did a poster for SOCI 375 – Dr. Michael Lindsay's class, and for that presentation, we formed groups and decided what we wanted to study among in terms of groups of leaders. My group chose women in Congress.

General impression: It's been great. I got to talk to a lot of faculty who were interested in what students have been studying. This experience helps you stretch your brain in answering questions on the spot and presenting what you've been working on. It's a nice culmination at the end of a year of work.

Favorite Unconventional part of RURS: One of my judges had no nametag and no clipboard, so I didn't know he was my judge. Basically, he came up to me and said, "You look like you have no one to talk to; I'll talk to you." I saw him afterward and found out that he was one of my judges.

Favorite part: I really enjoyed Dr. Lindsay's speech. He made the audience feel like their research was really important.