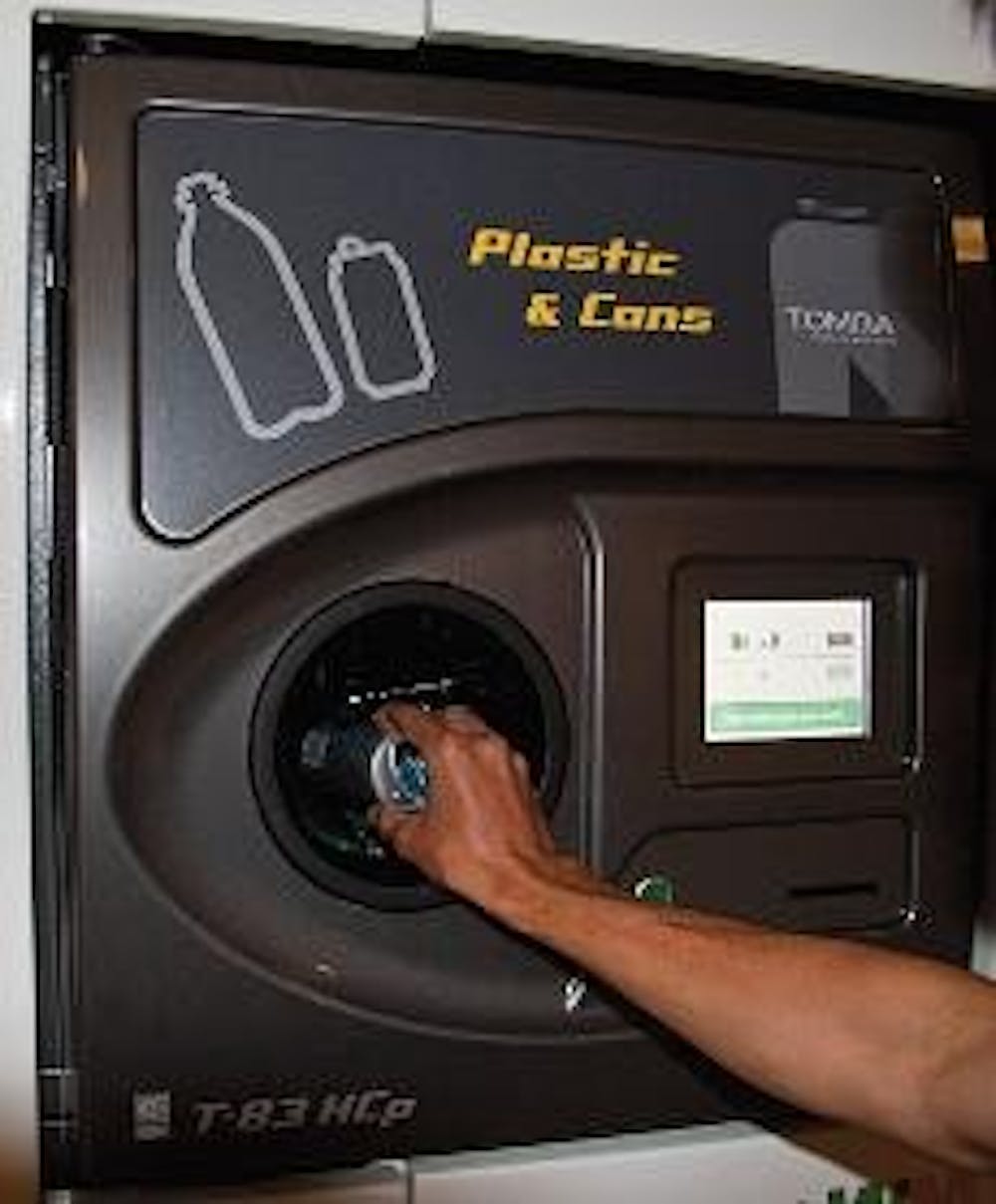 The recycling kiosk was installed in the Rice Memorial Center between 13th Street and the bookstore over Labor Day weekend. The kiosk accepts aluminum and plastic bottles for recycling, and gives coupons in return.

Going green at Rice is about to get bigger. A recycling kiosk about the size of three vending machines was installed over the Labor Day weekend in the Rice Memorial Center near the entrances of the Rice University Bookstore and 13th Street. The recycling kiosk is part of a pilot project by the Greenopolis Group at Waste Management, a national company that handles Rice's solid waste. The Greenopolis Group is the division of Waste Management focused on developing technologies to increase recycling levels. The kiosk is on a one-year trial at Rice University, according to Director of Sustainability Richard Johnson. It is capable of storing up to 9,000 aluminum cans and 1,700 bottles, roughly corresponding to 300 pounds of aluminum and 170 pounds of plastic.

"This isn't an ordinary recycling system," Johnson said. "It has a builtin intelligence system. It's where IT and recycling are finally overlapping."

Users place a plastic bottle or aluminum can inside the opening, and the kiosk spins the item to identify its barcode, Director of the Student Center Boyd Beckwith said.

Once users register on the Greenopolis website, www.greenopolis.com, they receive points which can be redeemed for rewards as an incentive for using the recycling kiosk, according to Dan Gilbert, senior brand manager with the Greenopolis Group.

Gilbert said users of the recycling kiosk will earn five points per container. Once someone reaches 100 points, he is eligible to choose a reward online. These rewards are valued at $5 to $25 and cover a wide variety of everyday items, such as automotive repairs, fast food, fine dining and discounts at retail stores.

Although using paper receipts may seem counterintuitive to the purpose of using a recycling kiosk, Beckwith said that the paper receipts, which contain transaction codes for the online rewards system, will be replaced with plastic cards in the coming weeks. The paper receipts also include a reminder to recycle the receipts themselves.

According to Gilbert, the plastic cards, which will be able to fi t on a key chain, will be ready to use in about two weeks. The user will be asked to swipe his card, which will then automatically upload points to the user's account.

Waste Management is still in the process of uploading barcodes for brands that the recycling kiosk can accept, Gilbert said, and will take brand suggestions from people who contact the Greenopolis Group via the Greenopolis website or e-mail support@greenopolis.com.

The purpose of using barcodes in the recycling kiosk, Gilbert said, is to ensure that people are recycling the proper materials. The recycling kiosk only accepts PET plastic - the transparent plastic often used for water containers, such as water bottles - and aluminum cans. Using barcodes will also enable it to gather data about the products which are being recycled.

According to the most recent statistics released by the Environmental Protection Agency, in 2008, 48 percent of the aluminum cans and 37 percent of the plastic bottles were recycled. Gilbert said Waste Management is testing the concept of the recycling kiosk to see if the project will increase convenience of recycling and result in more recycling.

"We're testing to see if this is more fun and rewarding and compelling than just dropping a bottle in a normal bin," Gilbert said.

Gilbert said the particular recycling kiosk at Rice has only been introduced in the Houston metropolitan area. There are six other similar recycling kiosks in Houston, one of which has been placed in Sam Houston State University. Gilbert said Greenopolis is interested in testing out the recycling kiosk in a variety of settings, including schools, apartment complexes and the municipal recycling yard.

If enough plastic bottles and aluminum cans are recycled during the trial period and enough people in the Rice community register for the service online, Gilbert said Waste Management plans on spreading use of the recycling kiosk to other states in the United States.

Gilbert said that if the recycling kiosk is successful, Greenopolis would target the states that do not have Bottle Bills, legislation that requires beverage distributors to collect a small payment from bottle-buying customers. This small payment is then given back to customers who return bottles to the distributors. Recycling rates are much higher in the 11 states that have enacted this legislation than elsewhere in the country, and Gilbert said that part of the goal of the recycling kiosks is to increase recycling in states without Bottle Bills.

"It's definitely an initiative for students to recycle," Abraham said.

Beckwith said originally, students and faculty were discouraged from bringing their recycling from home to discard at Rice because of the extra burden on the custodians.

"Now, with this machine, and because [Facilities, Engineering and Planning] wants to encourage recycling, Rice has become a sort of destination place for recycling," Beckwith said.

Beckwith encouraged students to take advantage of the recycling kiosk in the RMC. He said from his experience, Rice students and organizations have been very environmentally active, and for students interested in learning more or finding out more environmentally friendly ideas to implement, he suggests searching for Greenopolis' Facebook page, which he said has constant updates on how to recycle and better the environment.

"I've been impressed by the student activism for the environment," Beckwith said. "As the Student Center, we want to try and support what the students want to achieve."

Johnson said that last fall, a group of students in Environmental Studies 302 - Sid Richardson senior Frances Kellerman, Hanszen senior Kei Satoh, Christina Tsang (Jones '10) and Will Rice sophomore Julian Yao - conducted a study in which they found that two-thirds of off-campus students, both undergraduates and graduates, do not have access to recycling where they live.

"[The recycling kiosk] is another way of connecting them back to the campus," Johnson said.

Rice students have expressed interest in the recycling kiosk, though some have reservations about it.

"I think it's a novel idea," Wiess College junior Alisher Kamalov said. "It offers an incentive - it's better than tossing a can or a bottle in a recycling bin and just getting the satisfaction of thinking, 'Hey, I just recycled.'"

Despite the benefits of the kiosk, Brown College junior William García said its appearance was less than pleasing.

García added that the recycling kiosk did not offer a clear explanation of the process for students to use it actively.

"I would use it, but I don't know how the system works," he said.

Johnson said Rice and Waste Management will be working out problems with the kiosk throughout the school year, but that he is optimistic about the kiosk.

He recalled first seeing a Greenopolis recycling kiosk at Minute Maid Park. After the game, he saw children running around to collect leftover plastic bottles and redeem them for points.

"I thought this could represent the future of recycling because it combines incentives, intelligence and fun," Johnson said.