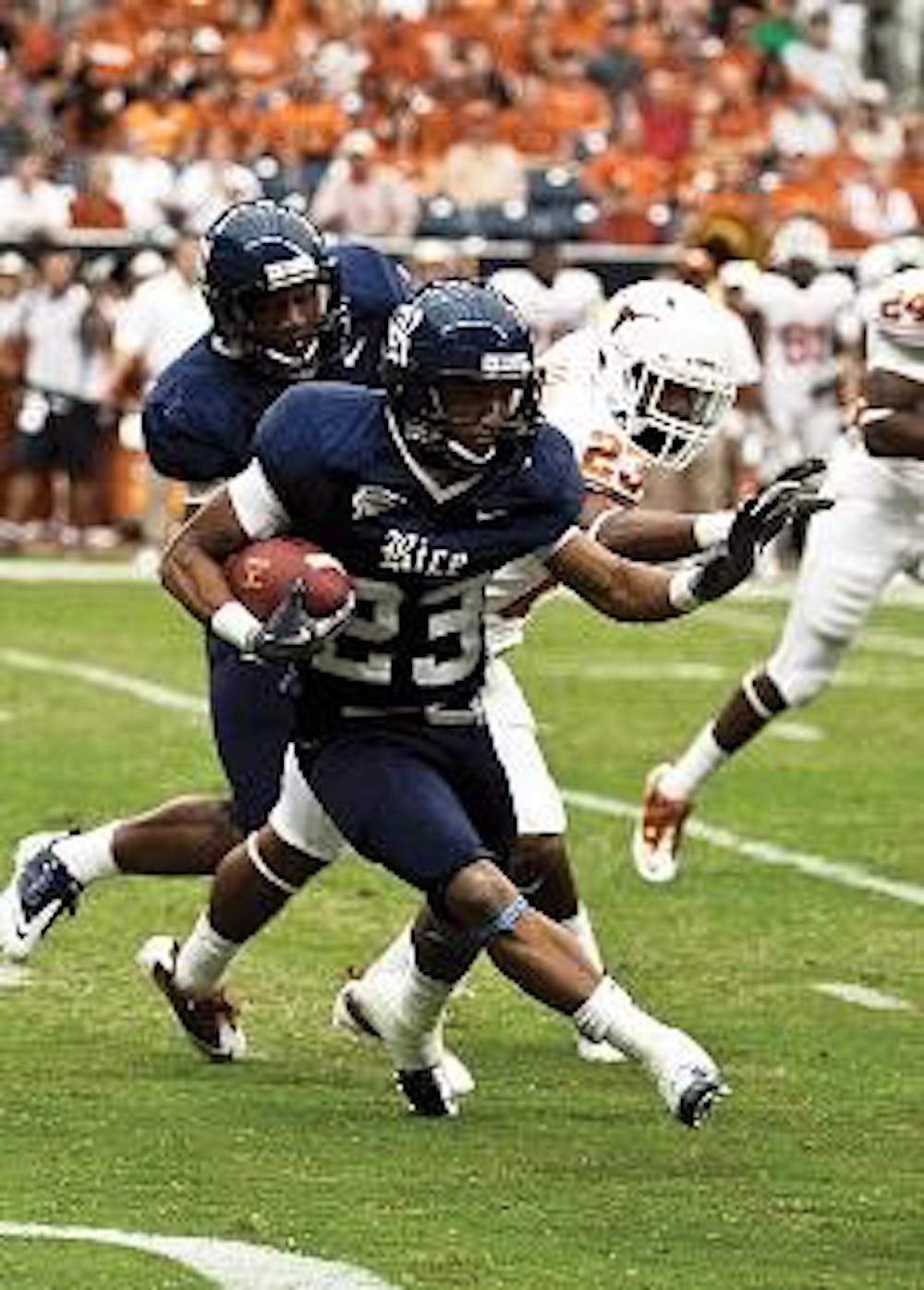 Redshirt junior running back Tyler Smith cuts to avoid Texas defensive back Carrington Byndom during the Owls' 34-17 loss to the Longhorns two weeks ago.

Playing special teams for a football team is no easy task. There is little glory for successes, and any failure is costly. However, last weekend, special teams made the difference for the football team in Rice's 32-31 win over the University of North Texas last Saturday. Head Coach David Bailiff took note of special teams' contribution.

The Owls traveled to Denton, Texas, last weekend to take on UNT, an in-state opponent the Owls hoped could provide them with their first victory. Both teams had plenty of momentum and hunger heading into the game, as both had performed well against BCS conference opponents the previous week and had held the games close. The Owls lost to the University of Texas 34-17, while the Mean Green fell to Clemson University 35-10.

Rice opened up on a high note, with redshirt freshman quarterback Taylor McHargue finding redshirt sophomore running back Sam McGuffie on a 51-yard sideline route for a touchdown on the Owls' first play from scrimmage. That pass was the longest Owls' pass for a touchdown since 2006.

Rice then regained the ball only two plays later after redshirt junior free safety Travis Bradshaw forced a fumble that the Owls recovered. The offense failed to move the ball, but redshirt freshman kicker Chris Boswell made his first of four field goals on the day from 50 yards out, clearing the bar with ease. The field goal was the longest field goal by an Owl since Luke Juist (Lovett '08) in 2005.

Boswell would end up making two more field goals in the first quarter, including another from 50 yards, bringing the score to 16-7 after the Mean Green managed to tack on a touchdown.

The Owls' defense fell asleep to start the second quarter, giving up a 14-yard touchdown pass to North Texas to allow them to pull to a 16-14 margin. The two teams then traded touchdowns, as redshirt sophomore tight end Luke Willson brought in a 22-yard touchdown pass from redshirt junior quarterback Nick Fanuzzi. Fanuzzi entered the game after McHargue injured his shoulder on a play, which forced him to sit out the rest of the game. He will not be available for the contest against Northwestern University tomorrow.

The Mean Green came out of the gate roaring in the second half, as quarterback Nathan Tune threw a 75-yard touchdown bomb that seemed to stun the Owls' defense and gave UNT its first lead of the game, a 28-23 margin.

Rice tacked on one more field goal in the quarter, giving Boswell his fourth on the day to tie the school record. Combined with senior Kyle Martens' 49.3-yard punt average on the day, it was these two kickers that provided the Owls with what they needed to persevere through the Mean Green's big plays.

The Owls were confident of their ability to score at this point, according to Willson.

"When we got the ball in the fourth quarter, I just had this feeling deep down that we were going to win this game," Willson said.

Freshman punt returner Andy Erickson then broke a punt return out to the Mean Green 37, giving the Owls excellent field position. Fanuzzi then converted on two big-yard passes to put the Owls on the three-yard line. Sophomore running back Charles Ross then punched the ball into the endzone, giving the Owls the lead with only a few minutes to play. The Owls missed the two point conversion, giving them a slim 32-31 advantage.

Rice forced a Mean Green punt but were then forced to punt once more themselves, giving UNT one last chance. UNT could not get the ball into the Owls' territory, halting a potential game-winning field goal. Mean Green running back Lance Dunbar scampered for 10 yards on a fourth down play but was penalized for a forward lateral, giving Rice the ball back for the final time.

Bailiff said his team was ecstatic to get their first victory so early in the season.

"We took a bus ride home, and it was the happiest five-hour bus ride home of my life," Bailiff said. "That's what winning will do for you. The Rice Owls football team just played with a lot of character and courage."

This week, the Owls have their true home opener, as Big Ten Conference member Northwestern University comes into Rice Stadium. It will be the first time the Owls have played a team in the Big Ten since playing Michigan State University in 2002. The Wildcats will look to improve to 3-0 on the season after wins against Vanderbilt University and Illinois State University. Quarterback Dan Persa has already tossed five touchdown passes while wide receiver Jeremy Ebert has tallied 166 receiving yards and one touchdown.

"We played Northwestern when I was at TCU, and they were big," Bailiff said. "Now they're big and fast. We're going to have our work cut out for us.