A sneak peek at the Brockman Hall for Physics 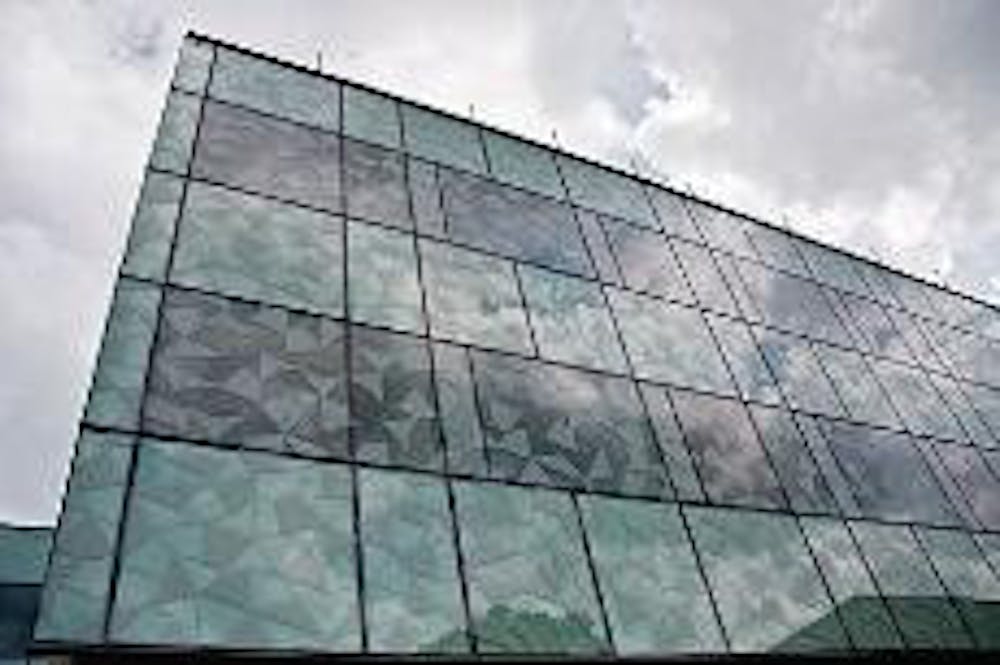 The windows of various offices in Brockman Hall are decorated with a penrose design, a pattern that implements five-sided symmetry. They are designed to cut down on solar heat and also to relate to the theme of physics in the building.

Brockman Hall for Physics, a new state-of-the-art facility for faculty in the Department of Physics and Astronomy and the Electrical and Computer Engineering Department, is expected to be completed by the end of 2010. The earliest move-in date for faculty, as projected by Project Manager Erik Knezevich, is Jan. 27, 2011. The building will include a classroom, labs, offices for faculty and a lecture hall expected to seat about 255 students, Knezevich said. There will also be a science quadrangle and an outdoor green space with a fountain similar to those near the Brochstein Pavilion. A rooftop observatory will be on the east end of the south wing and will be surrounded by red LED lights to make it easier to view the night sky.

Brockman Hall is composed of two wings: north and south. The north wing is raised on multiple 16-sided columns such that there is no ground floor, thus preserving the existing outdoor pathways. The north and south wings are connected by two bridges. The basement, located about 20 feet below ground level, extends below both the north and south wings and includes many of the faculty members' labs. Knezevich said that it has a high resistance to vibrations, because of two feet of concrete insulation.

Careful design of Brockman Hall began about two years ago and is still in progress with some small details, although Knezevich said major design plans for the building have not changed significantly.

Part of the reason for such meticulous design is the research projects that will be conducted at Brockman Hall. About four to six labs are currently unassigned but Knezevich said that each assigned lab has been tailored to suit the needs of the faculty members. For example, the lab space for Physics Professor Doug Natelson, who conducts research on nanoscale levels, includes a small copper-plated room to provide an optimum environment for his research.

Each lab has an independent set of transformers so that one lab's electricity will not affect the other labs. This is to counter the possibility of "dirty power," a phenomenon in which electromagnetic interference lowers the quality of the electric current. Several physics buildings that were visited in preparation for design of Brockman Hall faced this problem, Knezevich said.

"The labs are completely contained," Knezevich said. "They don't affect each other."

In addition, Brockman Hall has been designed to be an environmentally friendly building. Knezevich said the upper roof will be a white roof that is covered in high-reflectivity coating. Several of the window panels will be covered in screening that reflects 30 percent of sunlight and also allows people inside to see outside but not vice versa. Offices include daylight controls for the lights that use ambient light sensors to adjust the light settings.

A noticeable theme throughout Brockman Hall is the use of glass and light. For example, the building's walls are composed of glass bricks. Knezevich said the glass bricks are staggered with an opaque membrane that goes through the bricks to allow sufficient light to enter the building, while keeping the style consistent.

Communications Manager for Facilities, Engineering and Planning Susann Glenn said the purpose of Brockman Hall is to bring together researchers who are spread out across campus.

"Everyone is everywhere, and this building is going to serve as one lab space, one research space, for them," Glenn said.

She said that it has not yet been determined what will happen to the free space vacated by the researchers and faculty who will be moving into Brockman Hall.

Jones College sophomore Jeremy Tucker is looking forward to the building's opening, though he has reservations about the allocation of space within it.

"I'm really excited about the new building and the new lab space," Tucker, a physics major, said, "but the one thing I'm not happy about is that they aren't including more classroom and lecture space because of our expanding student base.