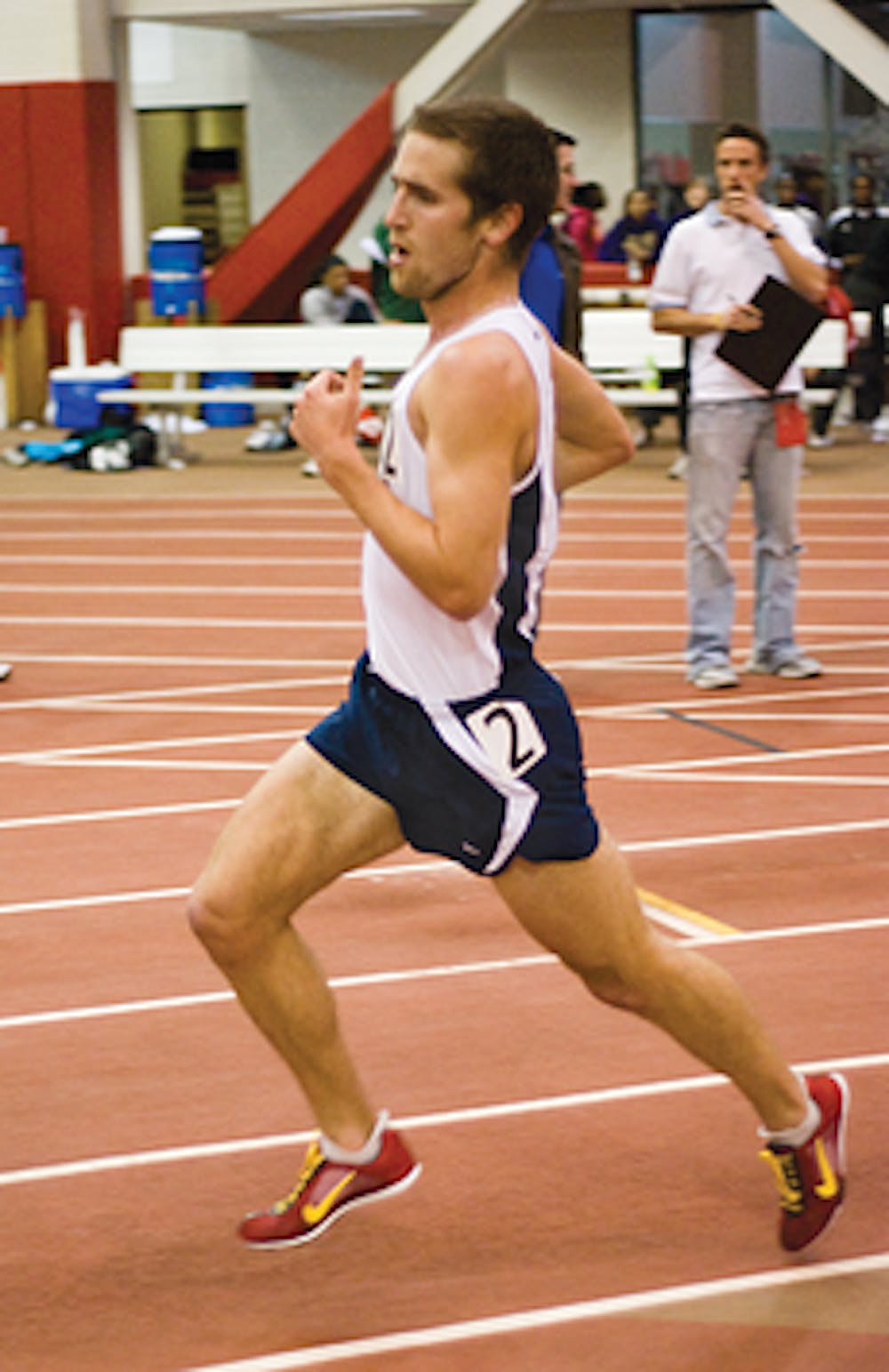 Junior Justin Maxwell runs to the finish in the 5,000m on the way to a win, helping the Owls take first at last Friday's Leonard Hilton Invitational.

If you witnessed last Friday's Leonard Hilton Invitational at the University of Houston, you would have watched a men's track and field meet that was a competition in name only. Rice used incredible individual performances in all events to earn an impressive 82.25-point win, easily besting the University of Texas-San Antonio's runner-up total of 68.25 and Houston's third-place grab of 65.25. Head coach Jon Warren (Jones '88) said even though Houston's showing was incomplete, the same was true for Rice.

"We had a couple of our 800-meter guys not run, as well as some heptathletes," Warren said. "Overall, we ran most of our team, and those that did compete did pretty well."

The amazing effort put forth by the freshmen continued to impress Warren. The several standouts included Clayton Chaney, who ran the 60m hurdles in 8.13 seconds to finish third, Collin Shurbet, who finished fourth in the 400 with a time of 49.08, and Jack Spinks, who had a solid high jump of 6 feet, 4.25 inches.

"It was the first indoor meet of their lives for most of them, and obviously the first college meet of their lives, so they definitely performed well given the circumstances," Warren said. "The two best freshmen by far were Chaney and Shurbet. They just had super starts. That's really great of Shurbet to run sub-50 on that track."

But Rice did not win the meet just on the backs of the new faces for the Owls also had excellent efforts from some sophomores. Chris Kato took home second place in the pole vault with a vault of 15'7", and fellow vaulter Garrett Stafford rose 15'1" to finish in fourth. Meanwhile, Clay Baker won the individual title in the shot put by throwing for 52'6", and Ugo Nduaguba had a triple jump of 49'2" to finish second, even though he only took three jumps due to a "minor twinge" in his leg, according to Warren.

The upperclassmen also provided excellent results for the team with a couple familiar faces from the men's cross country team scoring big points. Senior Justin Maxwell turned in a first place finish in the 5,000km run with a time of 15:02, while junior Simon Bucknell won the mile in 4:16.

Warren said he felt that these three were Rice's top performers.

"Obviously the best performances were the winners in Bucknell [and] Maxwell," Warren said. "It was an impressive win, a very good start for us across the board."

Alex Zinchenko, a freshman from Lisbon, Portugal, arrived on campus before the start of the semester and threw the shot put for the first time on Friday. His technique appeared a little shaky, but overall he seemed to be ready to challenge Baker for dominance in the event.

Looking ahead to the rest of the season, Warren took the same mentality to track as he had with the cross country team, highlighting a win at the conference meet as the main goal for the team.

"The only meet we need to make a statement at is conference [set to begin Feb. 27 at Houston's Yeoman Fieldhouse]," Warren said. "We'll definitely run everybody that's healthy at the Frank Sevigne Classic [in two weeks in Neb.] and at the Texas A&M Invitational [in three weeks at College Station, Tex.]."

In the meantime, the squad will pick up some athletes from the football team to fill its need at short distance events. Juniors Chris Douglas, John Welch and possibly Ahmad Sweeney, all wide receivers or defensive backs, will look to run the 100m and 200m events, while lanky freshman punter Kyle Martens will have a go at the high jump. Martens' best jump in high school was 6'6", and he finished fifth in the high jump at the South Dakota state meet his junior year.

The Owls will hope to maintain their momentum when they participate in the Houston Indoor Invitational on January 30, but if their season's beginning is any indication, the run-up to the conference meet will require little more than fine-tuning for this well-oiled machine.