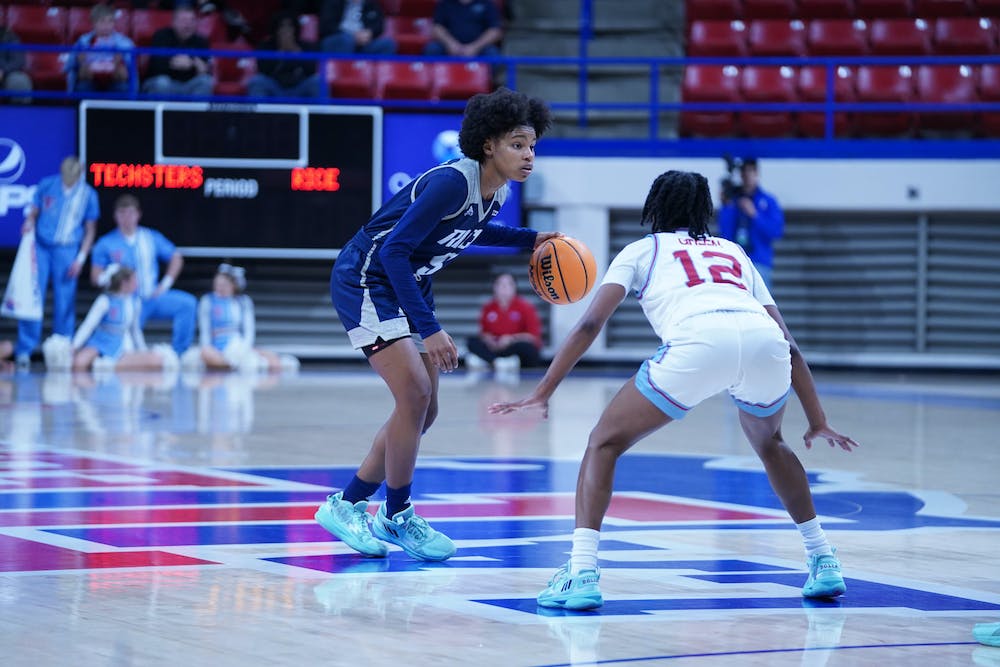 The start of the new year did not go according to plan for the Rice women’s basketball as they fell on Thursday to Louisiana Tech University 79-74. In their fourth Conference USA matchup this season, the Owls fell behind early, and their second half comeback fell short, dropping them to 1-3 in conference play.  Following the loss, head coach Lindsay Edmonds said she was disappointed with the Owls’ early deficit, which proved too much to overcome.

“When you go on the road in this conference you can’t come out and start games slow, and that’s exactly what we did tonight,” Edmonds said. ”We dug a deep hole and even though we fought and won the last three quarters, it was just too much to overcome.”

While the Owls started their season 9-0 in non-conference play, their in-conference struggles continue. Despite scoring the first five points, the Owls were on the wrong end of an 11-0 run and found themselves down ten after the first quarter. In the second quarter, the Lady Techsters stretched the lead to 16, the highest of the game, before a pair of three pointers from sophomore forward Malia Fisher and senior guard Katelyn Crosthwait sparked a 9-0 run closing the gap.

The Owls started the second half down eight and cut their deficit  to two before Louisiana Tech connected on a buzzer beating three-pointer. In the fourth quarter, the Owls’ efforts to erase the deficit were led by senior forward Ashlee Austin who scored seven of her team-leading 18 in the final quarter. Despite outscoring the Lady Techsters in the final three quarters, the Owls were unable to complete the comeback and lost by five.

Offensively, the Owls had four players in double figures led by Austin’s 18 points and were able to outscore the Lady Techsters in fast-break points and points in the paint. However, LA Tech outshined the Owls offensively, shooting above 50% from the field and beyond the arc. According to Edmonds, the Owl’s defensive performance was not what it needed to be.

“Defensively, we have to be more locked in to the game plan and that’s on me to fix before the next one,“ Edmonds said.

The Owls’ start to conference play has not been as fruitful as their program-best start to the season, and they’ve now dropped three of their last four games. They have a chance to turn it around and avenge their first loss of the season when they travel to Murfreeseboro, Tenn on Wednesday for a rematch against Middle Tennessee State University.  In their last matchup, a second-half push fueled a 74-68 MTSU win. The game starts at 6 p.m. and will be broadcast on ESPN+.