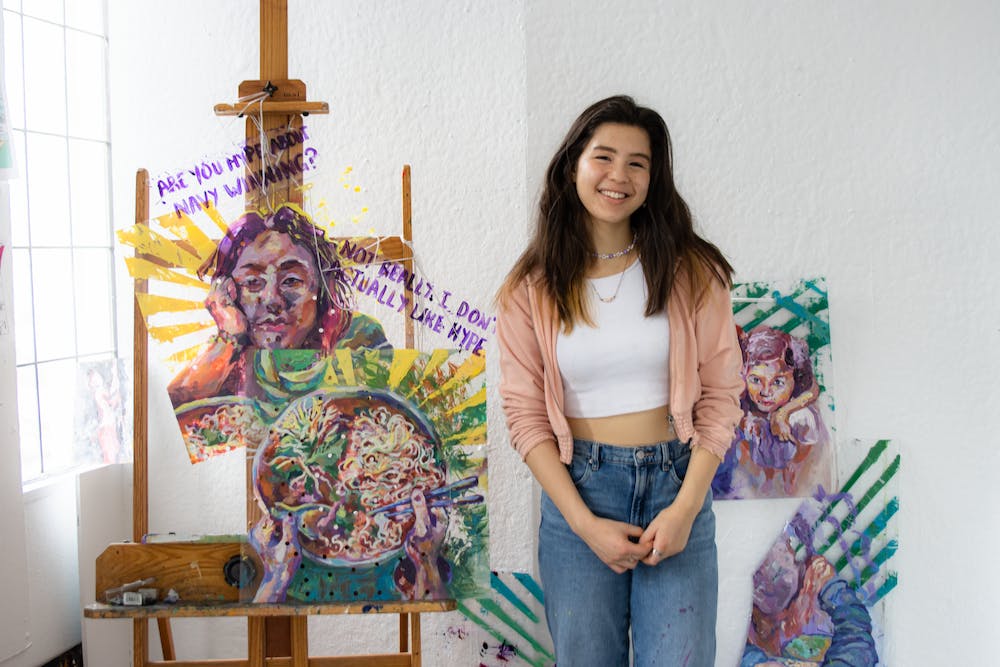 Rice owes much of its visual landscape to Hannah Usadi, whose art reaches from the end pages of the 2021-2022 Campanile to President Desroches’ holiday card and Pub merchandise. Although Usadi started drawing and painting as a child, her distinct artistic voice has emerged more recently.

“It was really this year that I found my niche, at least for the time being … which is more comic, character-based stuff,” Usadi, a Will Rice College senior, said.

“I had so much on my mind that it felt like an outlet to help organize some of the weirder things I was thinking,” Usadi said. “It started because I’ve always been interested in experimenting more with [my art]. I also grew up loving comics — Calvin and Hobbes, all of that stuff.”

Usadi’s coursework at Rice has inspired and refined much of her work.

“[Senior studio] has given me the discipline, but then also the freedom to not only make a lot of [art], but stuff that I like,” Usadi said. “And just going to everybody’s studios, it’s so inspiring. I don’t know if you’ve watched ‘Glee’ before, but it honestly feels like ‘Glee.’ Each person has their own thing going on. I’m like, ‘Dang, this guy is like making a rap song. And this other person is making these really intricate 3D-printed sculptures.’”

Usadi’s Instagram and artistic style at large have expanded to include painting, digital art and multimedia modes of storytelling. Usadi continues to channel and explore these creative intersections for her senior thesis.

“It started out with my interest in comics and conversation fragments with people and insightful things that they would say that stuck with me,” Usadi said. “And then I’d want to put their perspective into the world in a way that was easily palatable for everybody to see and understand. I’ve made comic collages, put comics on boxes or done animations over audio to achieve the same effect of combining word with image to convey some fragment of a conversation or someone’s perspective.”

Usadi acknowledged that although she wanted to accurately convey people’s experiences, the art that she produces is inextricably colored by her understanding of their perspective.

“It ends up being a reflection of my perspective of what they say because at the end of the day, I’m the one drawing the pictures and depicting them,” Usadi said. “So, a lot of what I’m trying to focus on is that feeling of getting as close as you can to another person’s perspective, but ultimately realizing that you can never fully know or understand them. Feeling that distance but also edging up on that closeness is what I want all of my different projects to culminate in.”

While Usadi’s art negotiates proximity and positionality in storytelling, she is also no stranger to striking a balance. A double major in mechanical engineering and studio art, Usadi said she appreciates the ability to do both technical and creative work, as well as opportunities to combine the two.

Usadi said many of her artistic opportunities at Rice have come from a series of coincidences. Among these are three acrylic paintings Usadi created for the biology department.

“The biology mural was because Dr. Novotny was my [Orientation] -Week Associate. And she [told me], ‘We are looking for someone to do a mural.’ And then I was like, ‘I could honestly do that.’ And she was like, ‘Really? Come by!’” Usadi said. “It could have only happened at a place like Rice where everything is so interconnected … if people know you have something to offer, that skill can be utilized throughout so many parts of campus.”

Usadi also encouraged other artists and creatives to have confidence in their work and continue seeking out opportunities despite fear of rejection.

“Don’t be afraid to advocate for yourself. The worst thing they do is say no, or that they went with another artist or that they just don’t need your services at the time. And the best case is that it’s something that they really appreciate, and it leads into other projects,” Usadi said. “To have that confidence and not undervalue your own work [is] something I still struggle with sometimes.”

Usadi plans to work in an engineering role for McMaster-Carr in Atlanta after graduating, but she hopes to eventually pivot into a design-related job.

“I hope to end up doing something more creative combined with arts eventually, if they can help me go to design school,” Usadi said. “It’s hard to find the perfect things, but I’m reminding myself career paths are nonlinear, so I’m just trying to find my own way to get there.”