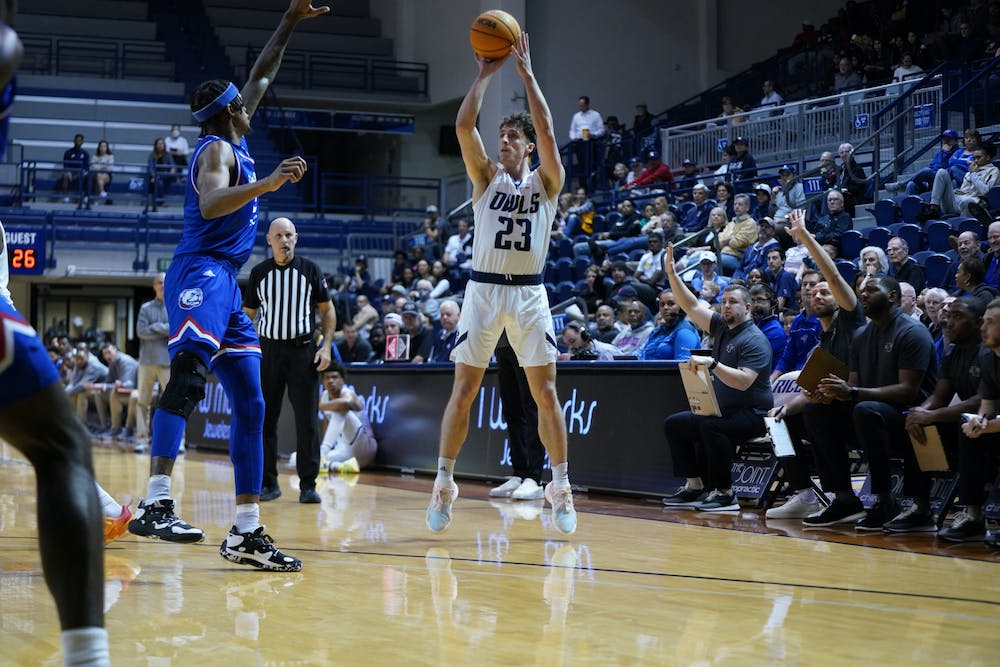 When junior guard Travis Evee’s shot from near half-court found the net at the buzzer to send their game against Louisiana Tech University on Thursday night into overtime, Rice men’s basketball head coach Scott Pera said he thought his team had been given new life.

Instead, they just suffered a slower, more painful defeat. A 5-0 LA Tech run to start overtime turned into a six-point Bulldog win at Tudor Fieldhouse.

“To LA Tech’s credit, they jumped out right there in overtime, and when you’re chasing like that in overtime, it’s hard,” Pera said.

The Owls weren’t chasing the Bulldogs all night, however. Rice led for much of the back-and-forth first half after a strong start. The Bulldogs kept it close, before pulling ahead after a 6-0 run with under six minutes remaining in the half and went into halftime with a one point lead.

The Owls’ shooting heated up at the start of the second half, with a pair of threes from junior guard Quincy Olivari giving them a nine-point lead. But LA Tech pieced together a run of their own to narrow the gap, as Rice’s offense went cold. According to Pera, the Owls had a chance to put the game away but didn’t capitalize when needed.

“We missed some opportunities when we had a seven point lead there in the second half that really would have been big if we had hit a couple or one of those shots to keep increasing it,” Pera said. “We let them back in it, and to their credit, they played really well, they deserved to win.”

With the game tied at 61, Evee hit his third three of the night to give Rice the lead at the four-minute mark, but LA Tech answered with a three of their own, and after another quick basket, held a two-point lead. The teams traded misses and turnovers, until Rice junior forward Max Fiedler hit a shot with 29 seconds left to tie the game. Then, all hell broke loose. LA Tech held the ball for what they thought was the last possession, and with two seconds left, Quandre Bullock hit a catch-and-shoot three over Evee’s outstretched arms. But Evee, who led all players with 28 points, wouldn’t let his opponent have the last laugh. Receiving a pass from Fiedler near half-court, Evee drained a long three and sent the game to overtime. According to Evee, Pera’s play gave him the space he needed to set his feet and get a shot off.

“The play was to get Max the ball in the middle, and then me and [Olivari] cut across and see if we can find an open area,” Evee said. “I was able to get my feet set and it went down.”

Overtime wasn’t nearly as close. LA Tech’s Cobe Williams hit a pair of shots, including one from three, to give the Bulldogs a five-point lead that they wouldn’t relinquish. The teams traded baskets, and an Evee three eventually narrowed the gap to one with under a minute remaining. But LA Tech’s Isaiah Crawford made a driving layup through a foul, and hit the ensuing free throw, to give the Bulldogs a two-possession lead and forcing the Owls to foul. LA Tech hit their free throws and sealed a 88-82 win.

The loss ended a five-game winning streak for the Owls, whose only loss in their previous 11 games had been in overtime to the No. 7-ranked University of Texas at Austin. According to Evee, the Owls shot themselves in the foot too many times on Thursday to keep their run going.

“We had been playing good basketball in games prior, and that’s why we were winning,” Evee said. “Tonight we just didn’t really play the way that we had been prior for 40 minutes.”

Now 2-2 in conference play, the Owls host Middle Tennessee State University on Wednesday. The Owls took on the Blue Raiders in their third game of the season in mid-November, an 81-46 loss. The game tips off at 7 p.m. and will be broadcast on ESPN+.