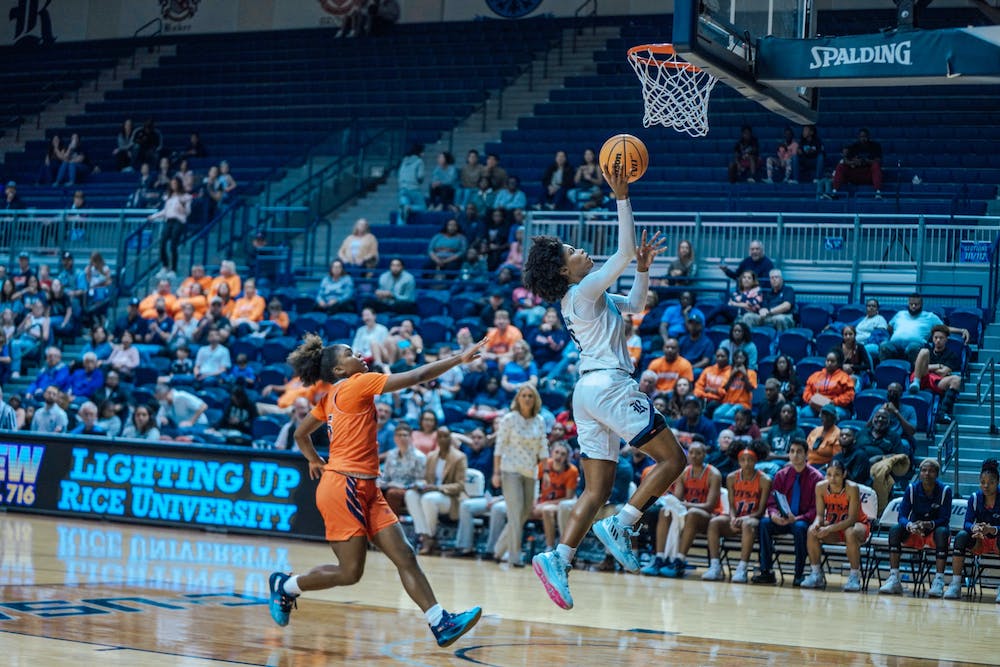 The Rice women’s basketball team came back from an 11-point deficit in the second quarter to defeat the University of Texas at San Antonio on Monday night by a score of 78-76. Their second straight win against Conference USA opponents, the Owls are now 3-4 in conference play and have a 12-4 record overall. The Owls were led offensively by senior guard Katelyn Crosthwait, who scored a career-high 23 points against the Roadrunners while also tying the school record for threes scored in a game with seven.

According to head coach Lindsay Edmonds, she was proud of her team for getting the win, especially after they spent a lot of their time on the road last week.

“Winning’s hard and winning in conference play is hard,” Edmonds said. “We had a really long week being in Tennessee on Wednesday and then going to El Paso Saturday and [turning] around here [tonight] playing. I thought we had a slow start but we found a way.”

The Owls and Roadrunners started the game by trading baskets during the first couple minutes. However, the Roadrunners managed to jump out to an eight-point lead by the end of the first quarter despite efforts by Crosthwait and senior forward Ashlee Austin to counter the Roadrunner baskets. In the second quarter, the Owls trailed by as much as 11 points, but cut into that deficit with a 9-0 run with three minutes left in the half. A three-pointer by Crosthwait with 36 seconds left gave the Owls their first lead since leading 2-0 at the start of the game. However, a last-minute layup by the Roadrunners gave UTSA a 39-38 lead going into halftime.

After a Crosthwait three to start the half, the Owls retook the lead at the beginning of the third quarter and never looked back. Crosthwait, Austin, and sophomore forward Malia Fisher helped the Owls build a lead in the third quarter. The Owls continued to use their momentum entering the fourth quarter. Up by 11 points with three minutes left in the entire game, the Owls almost squandered their lead when Roadrunners staged a 9-0 run to cut their deficit to two points with a minute and a half remaining. However, several key free throws made by senior guard Destiny Jackson extended the Owls’ lead to five. A UTSA and-one cut the lead back to two, but Rice ran the clock down to two seconds, and UTSA’s last-second effort couldn’t connect.

According to Edmonds, the strong performance by the Owls in the second and third quarters allowed them to survive the late push by the Roadrunners.

“We won the second and third quarters, which put us in position to have a few slip-ups in the fourth and we were still able to finish the game out,” Edmonds said. “I’m proud of our fight and our toughness. We could’ve laid down, but we had some adversity tonight, and we didn’t lay down. I think we showed [that] toughness all through the non-conference season and so that was good to see again.”

The Owls will try to carry their momentum forward when they host the University of North Texas on Jan. 19 at 7:00 p.m.