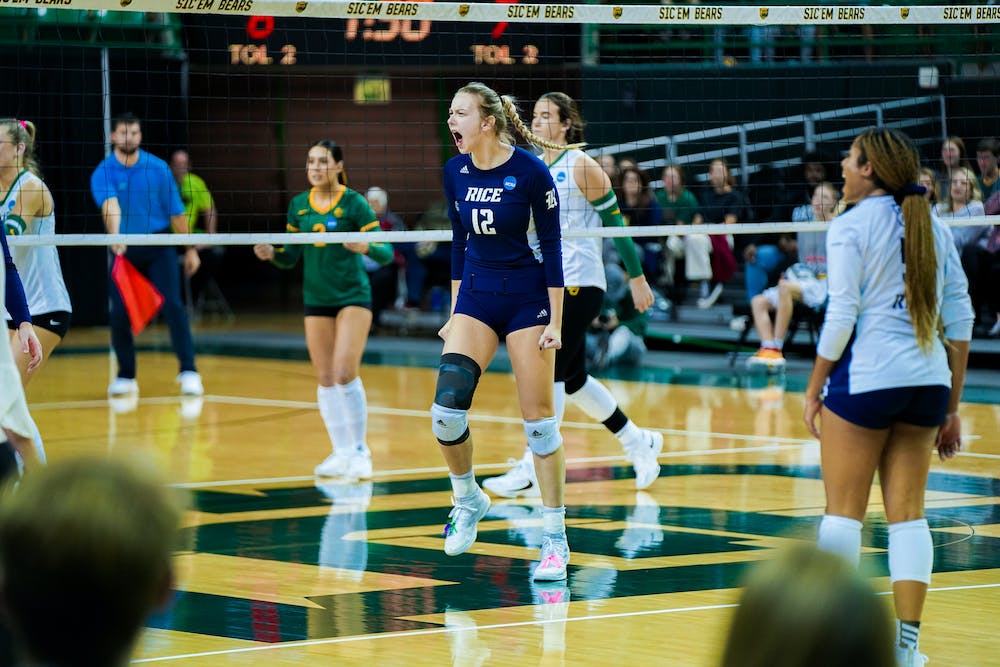 "I'm really proud of this team,” Volpe said. “I'm proud of how we executed at a high level… and followed the game plan. They did everything that we asked of them and more. Anyone that was here saw a team that never gave up. They fight all of the time. They play for each other … Congrats to Baylor, that was a helluva fight. It was a tough loss; we wanted that really bad so this hurts a lot.”

The first set started with both teams going back-and-forth until a 6-1 run by the Owls sparked by three straight kills from senior outside hitter Ellie Bichelmeyer gave the Owls the lead. After Baylor closed the gap, a 9-3 Owls run with a pair of kills by fifth-year senior middle blocker Anota Adekunle capped off the set 25-16. Adekunle, who led the Owls with 22 kills said that the Owls wanted to come out strong early.

“We were going all out for it,” Adekunle said. “We knew going into this game that we were going to have to give everything that we had and that’s what we did in the first set. We played for each other and really tried to execute the game plan.”

The second set was even more tightly contested than the first, with neither team gaining more than a three point advantage until late in the set. A Baylor 6-1 run gave the Bears set two 25-22, tying the match. In set three, the teams traded points and found themselves tied at 16. A quick Baylor run gave the Bears a small lead that they never relinquished, helping them win set three 25-23. According to fifth-year setter Carly Graham, who led all players with 56 assists, spoke about how the Owls’ knew they needed to be aggressive throughout the game.

“Like we said in the locker room before, we know we had to be fearless and go after it,” Graham said. “That is such a great team and if we're going to play it safe we're not going to get the result we wanted. We had to go for it and that’s how we started off the match and we tried to keep doing that the entire match.”

With their backs to the wall, the Owls exploded in the fourth set taking an early 8-2 lead. They never relinquished the lead, expanding it to 11 after scoring eight unanswered on their way to a convincing 25-14 win. The Owls were led by junior outside hitter Danyle Courtley who had seven of her 15 kills on the night in the fourth set. According to Volpe, statistically, the Owls were the better team on Friday, but the breaks just didn’t go their way.

“Looking at the stat sheet, we won in almost every category except for blocks,” Volpe said. “Baylor is a tough opponent. We match up pretty well with each other … and we did pretty much everything we could, [but] there was a point here, a point there that just didn’t go our way.”

In the fifth, Baylor jumped out to a 6-1 lead. The Owls tried to chip away at the lead, closing it to three with Baylor nearing match point. But the Owls ultimately fell short, as the Bears took two of the final three points to seal the set and match. After the match, Volpe said she was proud of the way the Owls fought for each other and left everything on the court.

Although the Owls were unable to continue their postseason campaign, their season resume is one of the most accomplished in program history. The Owls ended the season ranked No. 20, cracking the top-25 rankings 12 weeks in a row. They had numerous wins against ranked opponents, a 13-1 conference record and to top it all off, the Owls hoisted the Conference USA Championship trophy at the end of the season, defeating their rival Western Kentucky University for the first time in four years.

Friday’s match also ended the careers of the senior class, including fifth-years Adekunle and Graham. When asked about what the senior class means to her and the program, an emotional Volpe said that their legacy, especially that of the fifth-years, will last forever on South Main.

“These seniors have changed Rice volleyball for the better,” Volpe said. “[Graham and Adekunle] are two of the most talented volleyball players we’ve ever had but on top of that they are amazing teammates and leaders. I told them in the locker room before we came out here I’m so thankful they chose to stay at Rice for a fifth year. I don’t even think I can put it into words how much they have impacted me as a coach and the program. Everyone who has watched them play over the years will remember these two for a really long time and the impact the seniors have left on this team will last forever.”