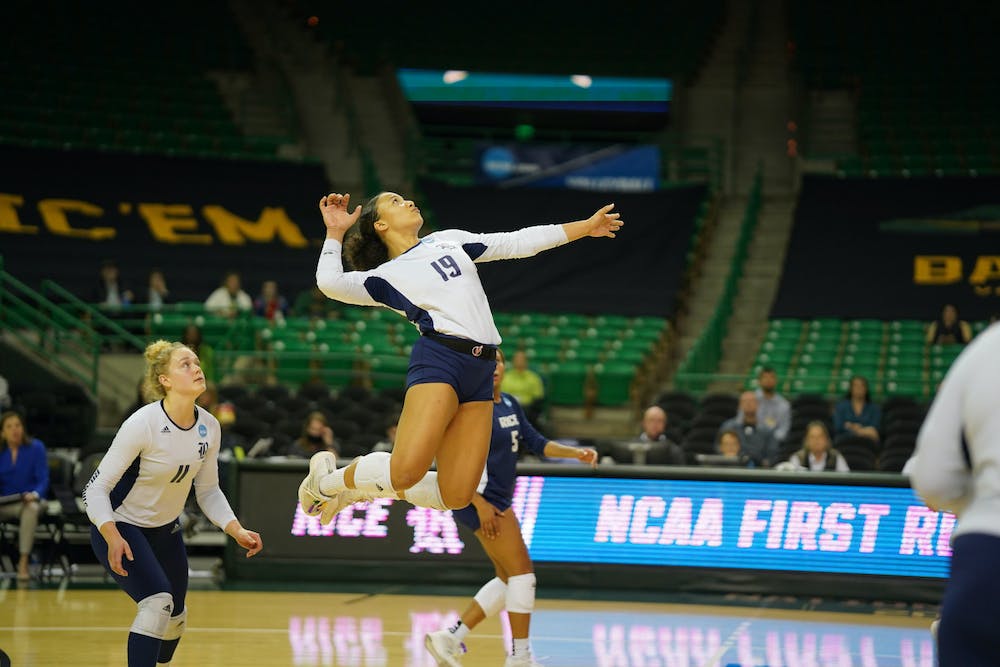 The Owls offense found a rhythm early and went on to outhit the Buffaloes .247 to .114. The Owls were led by junior outside hitter Sahara Maruska, who had a career high 22 kills on the night, setting a school record for kills in a NCAA tournament game. While Maruska led the charge, Volpe said that she was proud of the offensive variety and execution.

“In this match in particular, we just had more balance,” Volpe said. “We had multiple players involved in the offense executing at a high level. We ended up [hitting] .247, which is a little bit lower than our average. But we had more people just stepping up to kill the ball.”

The first set, which featured 11 lead changes, the Owls and Buffaloes went blow for blow with neither team taking more than a two point lead. Late in the set, the Buffaloes had set point until the Owls rallied behind three straight kills from senior outside hitter Ellie Bichelmeyer, who tallied seven of her 17 kills in the first set as Rice took the set 26-24.

In a back-and-forth second set, the Buffaloes jumped out to an early lead behind a 7-0 run. The Owls answered with a run of their own sparked by junior outside hitter Danyle Courtley, who, after going down with an apparent shoulder injury in the first set while diving for a loose ball, bounced back to lead the Owls with five kills in the set. With the set tied at 24, Colorado was able to capitalize on multiple blocks to steal set two, 24-26.

With the match tied at one, Rice won set three, 25-16 after breaking away from Colorado in the middle of the set with a 10-0 run behind five kills from Maruska. In set four, the Owls continued to put together big runs to put away the Buffaloes, 25-14. In the final two sets, the Owls’ defense held to hitting just 0.07 and 0.053, respectively. According to fifth year setter Carly Graham, the preparation gave the Owls the edge defensively.

“I think our coaches gave us a great scout that we were prepared for,” Graham said. “Something we talked about is the backcourt working extremely hard for the frontcourt and the frontcourt working extremely hard for the backcourt, to instill confidence and get everybody going. I thought our defensive effort was outstanding and we were truly fighting every single ball.”

Graham anchored the Owls on both sides of the ball, with 49 assists and 17 digs, her 11th double double of the year. The C-USA setter of the year also surpassed 4,000 career assists in the match, the fourth Owl to reach that milestone. Volpe had high praise for her star setter’s ability to control both sides of the game.

“Our defense really anchored us the entire match,” Volpe said. “I thought Carly did an excellent job in getting everyone involved and when we were struggling in one position, another position stepped up. That’s been our ammo all season and we knew it would help us in this type of situation.”

Looking ahead, the Owls will face the No. 4 seed Baylor University, who swept the University of Stephen F. Austin in the first round. When the two teams met earlier in the season, the Bears swept the Owls at Tudor Fieldhouse. This time, the game will be played on Baylor’s home court. With the possibility of advancing to the Sweet 16 on the line, Volpe said that the team will be focused on executing their game plan.

“We have a lot of respect for [Baylor],” Volpe siad. “Ryan [McGuyre] obviously has a great team so I think it's gonna be a great match. It's really about us executing on our side of the net, and we have a lot of competence in our abilities if we execute our style of play.”

The first serve is tonight at 7:00 p.m., and the match can be streamed on ESPN+.