MBB loses OT thriller to No. 7 Longhorn’s on day of UT coach’s arrest 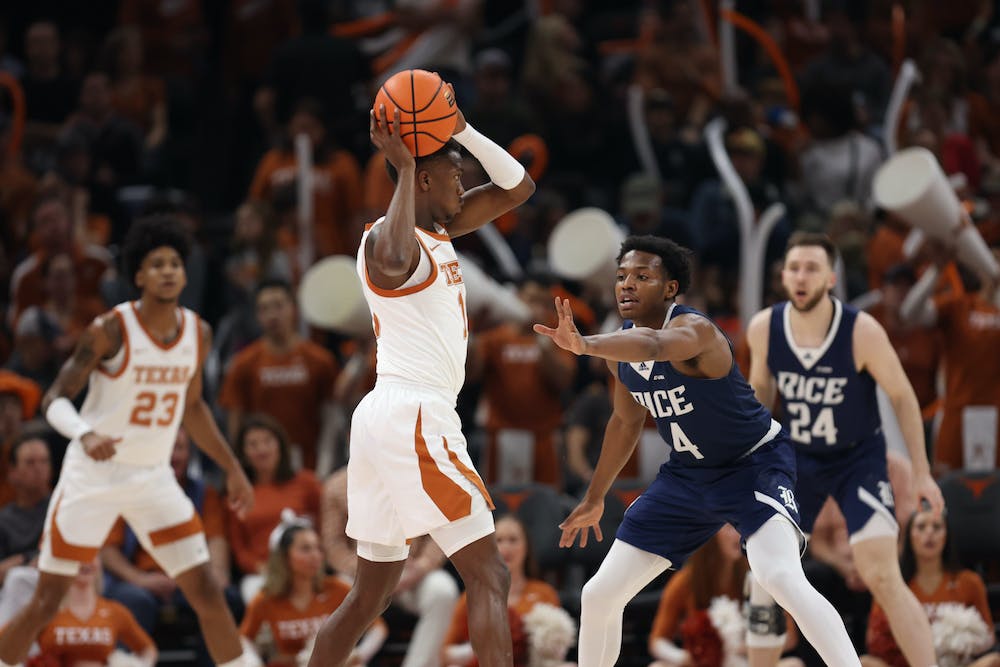 Late in the first half of Monday night's game against the No. 7 seed University of Texas, it looked like Rice volleyball might not be the only Owls to defeat a top-ranked Texas team. Up 33-23 with under two minutes remaining in the first half, the Rice men’s basketball team looked poised for their first win over a top-10 opponent in 40 years. That dream was for naught, as the Longhorns won a tight overtime battle, 87-81. After the game, head coach Scott Pera said he was disappointed in the outcome but proud of his players and their fight.

“What a game,” Pera said. “Credit goes to Texas — they played better down the stretch and better in overtime, but I’m really proud of our guys. They did everything that we asked them to do to prepare to win this game. They prepared correctly, they communicated correctly, they believed that they could win. My disappointment isn't that we lost; it's for the players.”

The morning of the game, the Longhorns made national news when their head coach, Chris Beard, was arrested on a felony domestic violence charge. Despite Beard’s arrest, Pera said that his focus remained on his own team.

“We woke up, watched film, went to our shoot-around prepared like we were playing so there was no distraction with our team,” Pera said. “I’m just trying to coach my own team.  I'm not really worried about the other team … I know they were going through it today and I feel for them, but I was focused on the Rice Owls.”

Amidst the controversy, the game went on, and the Owls opened up the game taking a quick lead, 11-7, which was never relinquished during the first half. Rice continued to go on big runs, with the Longhorns slowly chipping away at each. The Owls held their largest lead of the night (10) late in the first half and went into the locker room up by four. Junior guard Quincy Olivari led the Owls in the first half with 14 of his 28 points coming in the first 20 minutes of play. Alongside teammate and fellow junior, Travis Evee, Pera said he was happy with the way his guards led the charge.

In the second half, the Longhorns came roaring out with a strong run, while the Owls’ offense went cold. Down six with under seven minutes remaining, Rice went on a 11-2 run behind a pair of Evee threes to reclaim the lead.  But Rice couldn’t take advantage of a UT turnover on the next possession and the two teams traded leads until they were tied at 72 under two minutes to play. Rice’s defense forced a shot clock violation and had a chance to win but couldn’t connect on their final shot, sending the game to overtime. Junior center Max Fielder facilitated the Rice offense in the second half with seven assists. Coach Pera said that Fielder's “unique style” makes it hard for teams to prepare.

“It's hard for other teams to prepare for [Max] because in practice you can't simulate him,” Pera said. “There's nobody that can pass like him … with your scout team or your second team because he's so unique.”

In overtime, Texas took the lead quickly, scoring the first seven points of the period. Rice tried to claw their way back, twice narrowing the gap to four, but the Longhorns were able to ward off their efforts. Despite the loss, Pera believes that there is positive growth to take from the game.

“It was just a great fight by our guys,” Pera said. “Great communication in the huddle but most of all, great belief. They never stopped believing, they were having fun. They believed that they could win and they played well enough to win. But, sometimes, even when you do all of that, you don't win. I couldn't be prouder. The program keeps elevating, sometimes even in a loss."