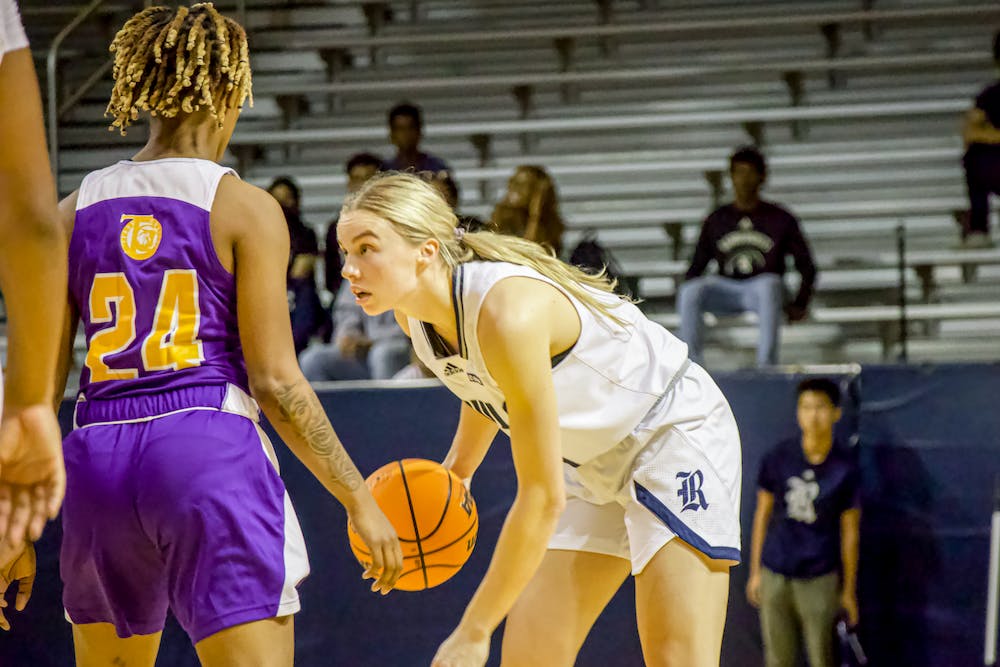 The Rice women’s basketball team has high hopes for the upcoming season. With every starter from last year returning and the addition of six new freshmen and one transfer, the Owls look to improve their 8-9 conference record from last season in what will be head coach Lindsay Edmonds’ second year with the team.

According to Edmonds, the Owls struggled at the beginning of last season before eventually settling in.

“We were dealt a really tough hand,” Edmonds said. “There was a lot of adversity, injury troubles [and a] low roster. [But] we really hit our stride, and we got on a roll the last, eight, nine, ten games of the season.”

The Owls’ conference record reflects those struggles, starting their conference season with a five-game losing streak, before winning eight of the next 12 games heading into the Conference USA tournament. In the 2022 C-USA preseason coaches’ poll, Rice was ranked fourth out of 11 teams, with Ashlee Austin, a senior forward, being named to the preseason all-conference team.

According to fifth-year guard Haylee Swayze, the team is determined after their second-round exit from the postseason.

“Last year we didn’t go as far into [the] postseason as we had hoped for, [which is] a motivator for this year,” Swayze said.

Both players and Edmonds point to the team’s new additions as a turning point for the Owls. Notable additions include two centers: junior Fatou Samb, a 6-foot-4 transfer from the University of California, Berkeley and freshman Shelby Hayes.

“In C-USA we don’t have a lot of true centers,” Austin said. “Having two true centers will really [bring] a different level of competition you don’t usually see in [C-USA].”

According to Austin, the Owls, who struggled with a small roster last season, hope to improve their play with more players.

“It was really tough [last year] having to only play with seven people some nights.” Austin said. “We’re going to be able to press up, play … tighter defense just because we have a lot more bodies now.”

Additionally, players speak highly of Edmonds, who looks to improve on her first year leading the team.

“She’s a great coach on and off the court,” Swayze said. “She really brought in this family atmosphere we’ve all adopted.”

Prior to joining Rice, Edmonds was a former North Carolina State University assistant coach. In the 2020-21 season, Edmonds helped the Wolfpack to a 22-3 record, their second consecutive Atlantic Coast Conference championship and their third  Sweet 16 appearance in as many years.

According to Edmonds, the team has a lot of potential with the starters that they return.

“This team is still really young and the players that played with me last season, those were some of their first experiences on the court,” Edmonds said. “We’ve got to grow in who we are as a basketball team.”

The Owls’ first game will be held in Tudor Fieldhouse on Thursday, Nov. 10 at 7 p.m. against Stephen F. Austin State University. After a non-conference schedule that includes matches with Texas A&M University, Texas Christian University and the University of Houston, the Owls’ conference season starts with a home game against Middle Tennessee State University Dec. 10. The conference will culminate in the C-USA championships in Frisco, Texas from March 8 to 11, where the Owls will be looking to win a championship for the first time since 2019.