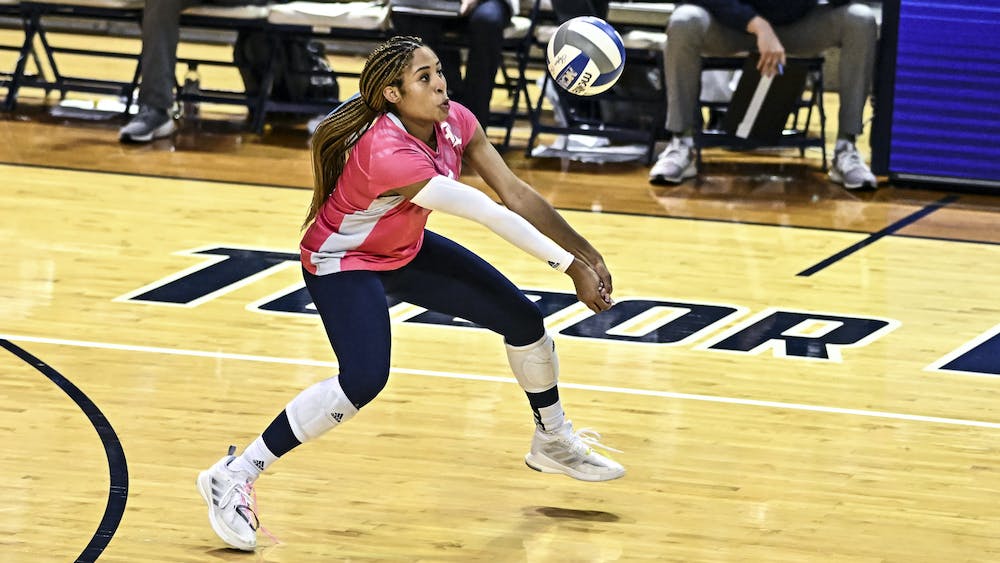 When you look at the volleyball court, it’s hard to miss junior libero Nia McCardell, who sports a different colored jersey than her teammates. But it’s not just the color of her jersey that’s made McCardell stand out this season. McCardell has stepped into the spotlight for the Owls this season, earning four Conference USA Defensive Player of the Week awards this year alone.

The daughter of former two-time Pro Bowl NFL wide receiver Keenan McCardell, McCardell’s life revolved around sports when she was growing up.

“It was always being put into youth sports, even if I was like ‘no, I don’t want to be’”, McCardell said. “My dad was definitely hard on me, hard on all my siblings with being hard workers and being leaders, and I think that really has influenced me as a player now.”

In addition to watching her father play football, McCardell watched her older sister play volleyball when she was young. According to McCardell, her relationship with her sister strengthened her love for the game.

“I grew up always going to my older sister’s club tournaments, so I’ve always been around the sport,” McCardell said. “I really grew a strong love for the game early on, and having her as a role model really played a part in my journey. Always being able to practice with her at home or going to the gym for extra hours really grew the strong love for volleyball.”

Recently, however, the roles have been reversed. Now, McCardell’s sister and father are the ones cheering her on the sidelines while she is having her best statistical year yet for the Owls.

“It’s kind of funny, it’s like I’m the superstar now, and all the attention is on me, and they think I’m like the best thing ever,” McCardell said. “They’re my number one supporters, and if they can’t come to my games, I’m getting these texts like ‘oh my gosh, 20 digs, 30 digs,’ or if I have a bad game, they’re the ones that I can call on, and they’ll tell me my mistakes, and we can talk about it.”

McCardell has embraced the starting libero role for the Owls this year, leading the team with 432 digs and has already recorded 100 more digs than she did in either her freshman or sophomore seasons. Despite her current success, McCardell said her freshman year tested her both physically and mentally.

“A few games into [my freshman] season, I partially tore my PCL, and that completely just altered my game,” McCardell said. “I wasn’t 100 percent, but I was still able to play, but it really affected my role on the court and my mental game. I was scared to make full moves, I was scared to play how I usually played, [and] I would not bend my knee because I was afraid that the incident would happen again.”

Although McCardell felt back to normal physically at the start of her sophomore season, she struggled mentally after returning to the court. According to McCardell, she began to doubt herself and dwell on errors.

“I was just not in the right headspace,” McCardell said. “I would second guess myself, I wasn’t able to move on from mistakes, and I think it was just a really challenging time in my career because I wasn’t performing at my best, and I couldn’t really figure out why.”

According to McCardell, head coach Genny Volpe recommended reaching out to a sports psychologist on campus.

“Going in, I didn’t really know what to expect,” McCardell said. “I was just like, maybe she’s going to give me some tips to get through it, but we really kind of went in deep about my past, like how I used to get through certain difficulties and games in my past [and] past relationships with my dad, my sister and my mom being my supporters.”

The sports psychologist provided some advice on how to keep them close even when they aren’t able to make her games.

“I feel like that really kind of was a breakthrough for me because my family isn’t always able to be at my games all the time,” McCardell said. “Realizing that maybe I need to talk to them a bit more before my games because they played a big part in pre-game rituals helps me.”

McCardell has come into her own this year, averaging a career-high of five digs per set for the Owls. According to McCardell, the experiences leading up to now have led to her successful play on the court.

“Playing libero again, I feel very confident in my game even though I still have those tendencies to get in my head sometimes,” McCardell said. “I do a better job of moving on from points, and I think being able to see the sports psychologist and talk about some of my issues really got me out of that rut. So I’m thankful for that because now I feel like I’m playing at a better level.”