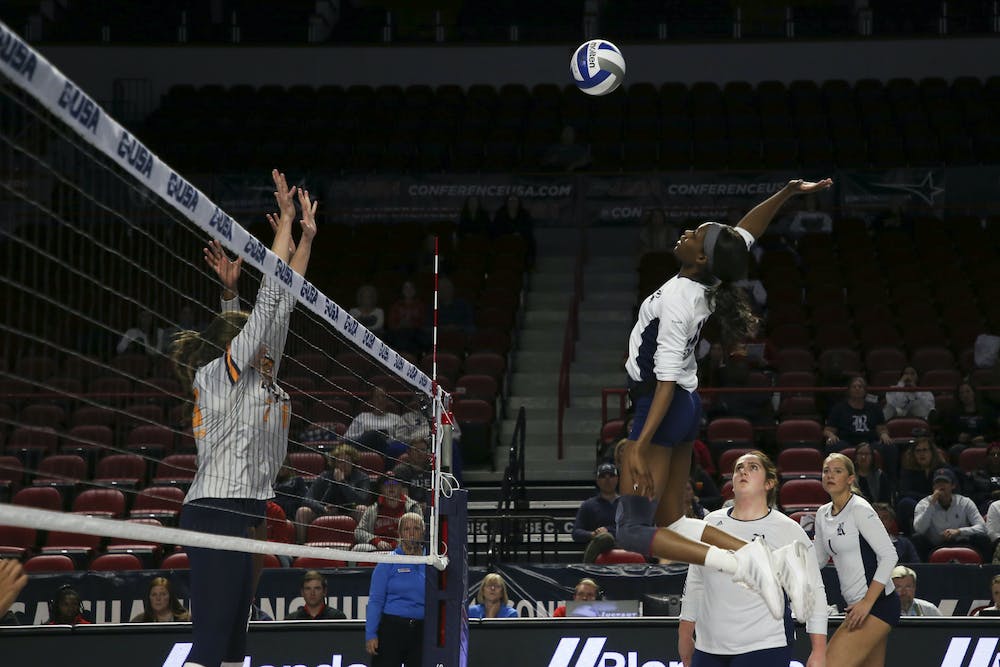 “I’m proud of the team for coming out today and beating a really strong UTEP team in three sets,” Volpe said. “It wasn’t just about the sweep, it was about how we played. We were really efficient, very focused, [we] really stuck to the game plan, so [I’m] just very proud.”

The No. 3 seeded Miners pulled ahead early in the first set, jumping out to a 7-3 lead. But a 7-0 run gave Rice a 13-10 lead and they closed out the set 25-18. According to fifth-year setter Carly Graham, the slow start forced their defenders and passers to get more involved in the attack, sparking their offense.

“We knew we started out kind of shaky, we wanted to get flowing throughout the rest of the game,” Graham said. “So defenders and passers were working super hard as well as the hitters to be available.”

The second set was the strongest of the day for Rice, as a 12-1 run early in the set put them ahead 15-4. Behind six kills in six tries from fifth-year middle blocker Anota Adekunle, who led the match with 14 kills, the Owls took the set 25-12. The third set was the closest of the match, as the two teams traded points for nearly the whole set. A late UTEP push gave them a 23-22 lead but Rice scored three straight points to secure the win. According to Volpe, the Owls’ efficiency – they hit .447 on the day – led to their big win.

“Our efficiency was just incredible,” Volpe said. “We were not giving points away. We knew that if we give points to UTEP, that’s just going to make it a lot harder to beat them.”

Tomorrow, the Owls will try to secure their first conference championship since 2018, after losing to WKU in the final for three straight years. The two teams met just over a week ago in a five-set WKU win that decided the conference regular season championship. Three of the five sets needed tiebreakers and WKU only took the fifth set after the Owls had two chances to seal it on match-point. Volpe said that she expects another close match on Sunday.

“Western is an incredible team,”  Volpe said. “We were just here last week and we experienced a five set loss. Could’ve gone either way. What we’re looking to do is just play Rice volleyball, let it ride, and it should be a great match.”

Tomorrow’s match will be played on WKU’s home court. In what will be their final shot at the Hilltoppers before leaving C-USA for the American Athletic Conference, Volpe said the Owls will lean on their chemistry to give them an edge this time around.

“I think for us, it’s about just playing Rice volleyball,” Volpe said. “We have a lot of experience, we have a lot of weapons, but we also have this team chemistry that I think is unmatched. So for me, I just want this team to let it shine tomorrow, have fun.”

FIrst-serve will be at 1:00 p.m. on Sunday. The game will be broadcast on ESPN+.