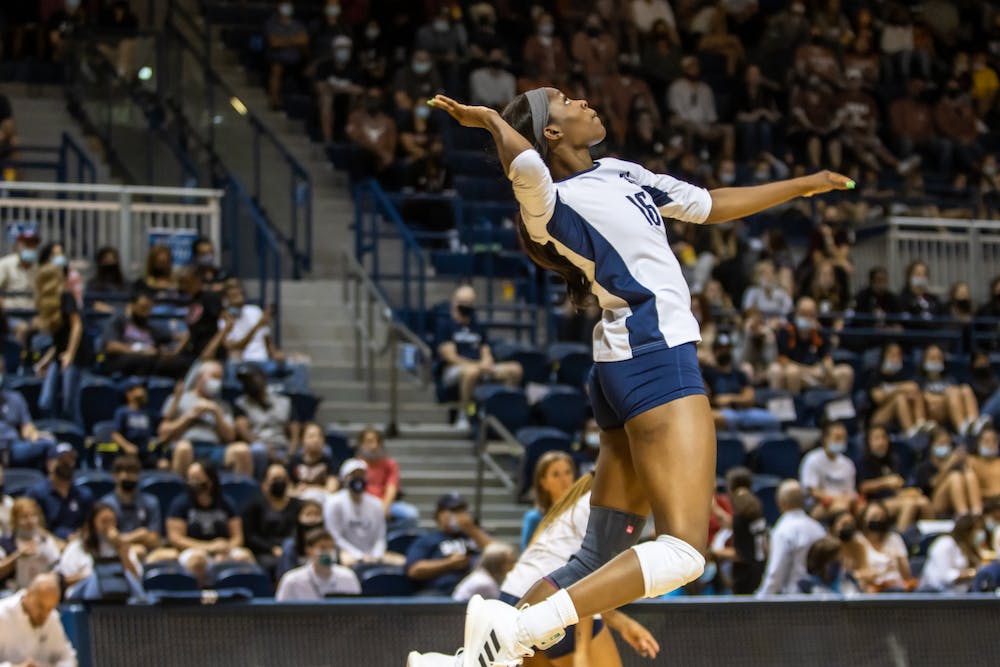 “We're excited to be moving on to round two,” Volpe said. “We're very happy to pull off a sweep, a very hard earned sweep. I thought FIU played great and presented us with a lot of challenges [but]... we finished the job and beat a good team.”

The Owls started the opening set of the tournament with a bang, going on a quick 7-1 run, sparked by three kills from junior outside hitter Sahara Maruska. However, the Panthers answered with a 7-0 run of their own to take the lead in the middle of the set. Late in the set, the Owl’s senior frontcourt took control with outside hitter Ellie Bichelmeyer and middle blockers Satasha Kostelecky and Anota Adekunle getting two kills apiece to take the first set in a 26-24 tiebreak.

Set two mirrored the first with the Owls jumping to an early lead which was promptly cut by a Panther’s counter-run. Late in the set, after a late Panthers run closing the Owls lead to 24-22, a Maruska kill claimed the set. Maruska, who hit .359 on the night, matching her season-best, said that her teammates’ efforts in the pass game set up her successful performance.

“I felt good today,” Maruska said. “But something that helped me the most was getting a pass. I really held on to my team and service who was able to get up a good pass and the middle [blackers] did a good job transitioning out early so that I could have a single block.”

With the smell of a sweep in the air, the third set was no different than the rest, with the Owls starting with a 5-0 run. After extending their lead to 9-2 the Panthers, who found themselves with their backs to the wall, fought back and took the lead 16-14. But that was the last time they would have the lead all night, with the Owls closing the match on a 9-1 run. Adekunle and Maruska combined for 10 kills in the third set. Volpe said that although the Owls didn't play to their full potential, she was proud of their composure.

“We didn't play the perfect game but I’m really proud of how we stayed composed and were able to finish the job,” Volpe said.

Now, the Owls move to the semifinals where they face No. 3 seed UTEP. The two teams have met twice this year, with the Owls taking their first match in five sets before sweeping the Roadrunners later in the season. The game will be played on Saturday at 2:30.