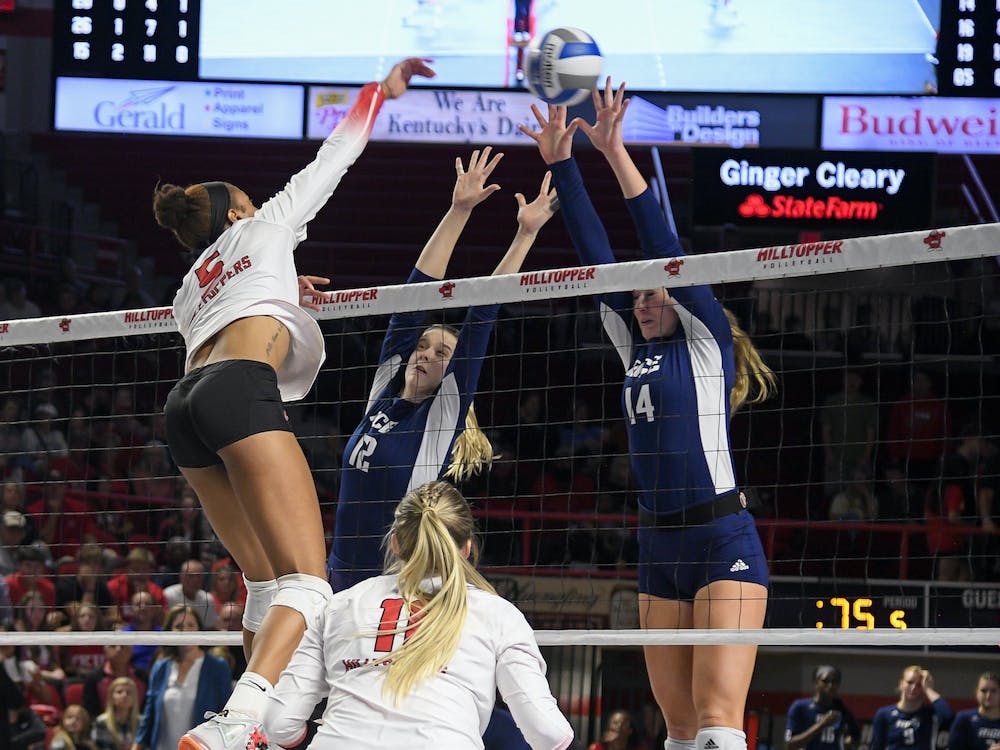 Thursday’s game between the two Conference USA heavyweights was no exception. It took the Hilltoppers five sets and a tie-break to claim the conference regular season title over the Owls in the closest you’ll get to an instant classic in small-conference volleyball.

“I think anytime you lose 14-16 in the fifth set, you have shown it could have gone either way,” Volpe said.

The first set showed no hints of how close the match would be, though. After Rice took five of the first eight points, a 12-3 WKU run helped them win the set convincingly. According to Volpe, the Owls’ offense was slow to get going.

“In the first set we weren’t really playing our game offensively,” Volpe said. “We were defending them pretty well, but our offense was still not quite in sync.”

Four points in, the second set looked like it was headed for yet another WKU trouncing. But after WKU’s 4-0 lead turned into a 11-7 lead, fifth-year middle blocker Anota Adekunle, who had an otherwise quiet night, sparked a 5-0 Rice run with two kills. Western Kentucky responded with three straight points, but Rice returned the favor to hold onto their one-point lead. The teams traded points and mini-runs until a Western Kentucky error gave the Owls a chance to put away the set at 24-22. Two straight Hilltopper points forced a win-by-two tiebreak, and another point put them on the brink of a 2-0 match lead. But a Hilltopper attempt didn’t make it over the net, giving Rice a point and tying the set. A kill by senior outside hitter Ellie Bichelmeyer put Rice a point away from taking the set, but a fifth-year setter Carly Graham’s ensuing serve missed the mark to force yet another tie-break. Finally, a pair of WKU errors gave the set to the Owls 28-26.

The third set was only slightly shorter, with the team’s trading blows nearly point-for-point all set until Rice finally pulled ahead to a 24-22 lead. But the Hillltoppers came back once again from behind two kills, and this time they sealed the set in just one tie-break after an Adekunle error.

Down 2-1, Rice turned in their strongest performance of the night to force a fifth set. An 8-1 Owl run from up 11-10 gave them a decisive lead. With the Owls up 23-12, WKU put together a 4-0 run to give Rice a quick scare, but a pair of kills, one from Bichelmeyer and another from junior outside hitter Sahara Maruska, put away the set 25-17. According to Volpe, once their offense woke up, the Owls played better than the Hilltoppers for much of the game.

“After we got our offense going, we were outperforming them on many levels,” Volpe said.

With the conference regular season title on the line, WKU rushed out to a 6-2 lead, but a 5-1 Rice run evened the game at seven. Rice took three of the next five points, but two kills from reigning C-USA player of the year Lauren Matthews helped the Hilltoppers to three straight points and a 12-10 lead. Three points away from defeat, junior outside hitter Danyle Courtley’s three kills and a Matthews error gave Rice a 4-0 run and put them one point away from their first win over WKU since 2018.

At match-point, a powerful Matthews strike hit off of freshman setter Darby Harris and bounced over the Owls’ sideline. Junior libero Nia McCardell sprinted past Volpe and made a lunging save, sending the ball back to a crowd of three Owls. But none of them could decide who should take the next swing and the ball fell to the ground. From there, Matthews, who had a career-high 30 kills, took over. After Graham set up Courtley for what could have been the match-winning kill, Matthews flew in for a block to force yet another tie-break. With the game tied, Matthews’s kill attempt was blocked, but she alertly hit the ball right back over the net before Rice’s defense could reset to give WKU match point. Then, after a back-and-forth rally, Matthews rose above the net and struck the ball just past a pair of Owls and into the ground to clinch the title.

According to Volpe, the Owls had plenty of chances to put the game away in the final points.

“There were some long rallies in the last four points and unfortunately, WKU ended up getting more strong attack opportunities and capitalized on them,” Volpe said.

After beating Middle Tennessee State University on Saturday, the Owls now enter the C-USA tournament as the No. 2 seed. If both Rice and WKU are able to get past their first two opponents, they would meet in the conference championship game for the fourth straight season – the Hilltoppers have won each of the last three. According to Volpe, after the heartbreaking loss, the Owls would love a chance to take the conference title from their rivals.

“I feel pretty confident speaking on behalf of the entire team that we would love the opportunity to play them again,” Volpe said. “But we will have much work to do, and so will WKU, to get to the championship match of the C-USA tournament.”