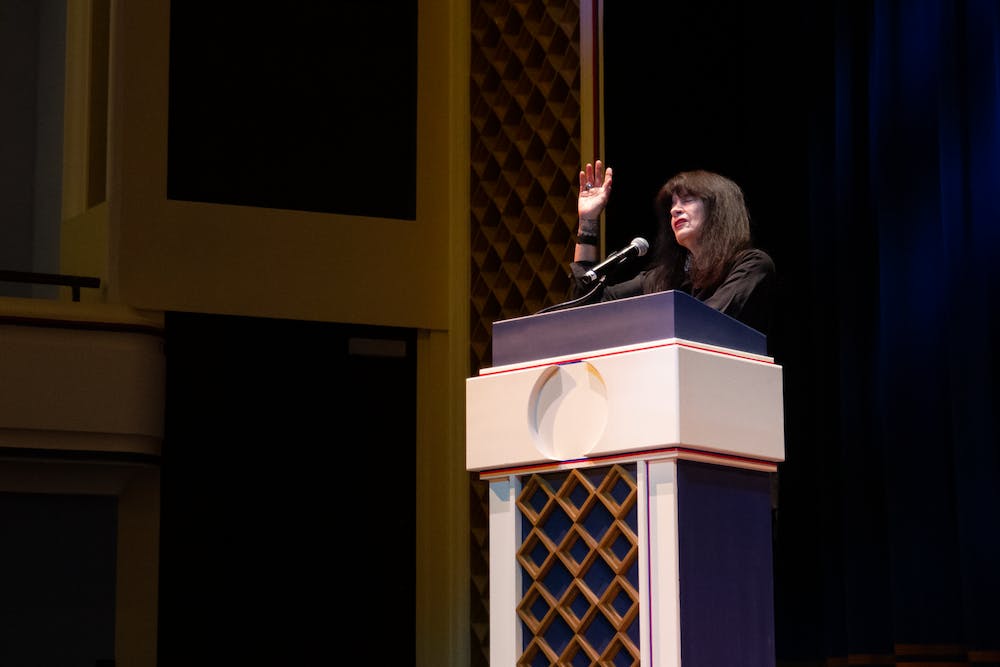 America’s first Native American U.S. Poet Laureate, Joy Harjo, stopped by Rice’s Brockman Hall for a reading of her newly published poetry collection, “Weaving Sundown in a Scarlet Light: 50 Poems for 50 Years,” on the rainy evening of Monday, Nov. 14. Following the reading was an on-stage conversation with 2022 Texas Poet Laureate Lupe Mendez, during which Harjo shared harrowingly intimate details of her view on art, life, death and loss.

The opera hall was warmed by a packed audience of poetry enthusiasts holding the first edition of the celebrated poet’s new selection published this November, which consists of the best poems across decades of her influential career. Harjo began the night discussing her revelation of the symmetry and spiritual connection between her favorite art forms: poetry and music.

“In our Muskogee Creek community, we have songs for everything,” Harjo said. “I think all of us did, and we’ve lost touch with that — songs for getting out, songs for making a good grade on paper, songs to help the plants, songs for grief, songs for joy. That is poetry.”

Unsurprisingly, Harjo is also a musician herself. For the reading of one of her poems, “Grace,” Harjo rendered it as a song and performed the poem chanting in a slow, melodic tune. She later shares that her passion for music actually preceded her love for poetry.

“I had no plans to be a poet, I was always an artist. I was not a word person, although I read constantly,” Harjo said. “[My journey started] when I heard Native poets and heard that they were writing about our lives, but in the small, well-crafted little moments. I just started writing, and it took over. It made no sense at all … but my poetry spirit is very strong.”

Many of the poems Harjo writes grapple with the themes of loss and grief. Words carry strength and impact, Harjo believes, so she is intentional with her power to write poems and hopes to send positivity into the world.

“I wrote [“Creation Story”] when a beloved poet friend passed. But it was also about our country. It’s about a family. It’s about the importance, again, of words,” Harjo said. “It’s hard to write these kinds of poems … I was thinking about how this country will continue, how our families will continue given all of the assaults, the various discrimination, our children dealing with [drugs such as fentanyl] … and thinking about what kind of story is this and yet always believing in that thread of love that goes through everything.”

Throughout her 50 years as a poet, Harjo has witnessed many changes both in the industry and in the world in general. It is only natural for Harjo to use her words to reconcile with the cultural shifts in modern society due to reasons such as technology and social media.

“I like the availability of the digital [age] … But as human beings, we need food, clothing and shelter. We also need to feed our minds nourishment, not TickTock,” Harjo said. “It cuts your attention, it infects your story-gathering, it cuts it into little pieces.”

Harjo does appreciate at least one thing about the digital age though, which is the increasing access Native American poets have to the general public.

“All the Native poets that we see now are part of the [conversation]. That was not the case when I was coming up as a poet,” Harjo said “Even the best Native poets, you will not see them, or the best Chicano poets. If you didn't see us, you didn't see us in the national press being published by big publishers. For the most part, we weren't able to cross the threshold. It was very rare and did not do it very easily and nicely. That has changed. There are still struggles. But now … we have more of a voice.”

Looking into the future of her already celebrated journey as a poet, Harjo says she is considering slowing down.

“I'm thinking, 50 years, I could let go at this point,” Harjo said. “I feel like I've fulfilled one part of what I was put here to do, but there's another whole round of things to do. I've got music I'm working on, et cetera … I've gotten to that place where I need a little bit of rest. But I also believe that, you know, I always think I'm going to be doing my best work. I have plenty of time to rest after I'm dead.”