Top-seeded soccer stunned in first round of C-USA tourney 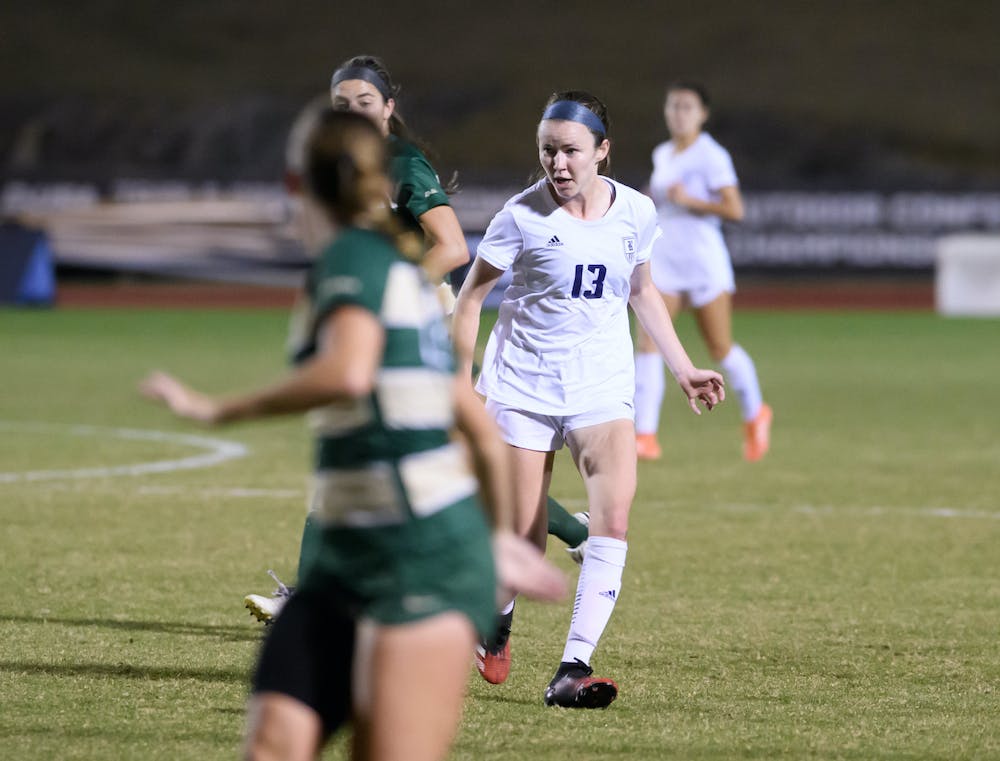 After an undefeated Conference USA regular season, the top-seeded Owls came into the first round of the conference tournament against the eighth-seeded University of North Carolina at Charlotte as the heavy favorites. But history repeated itself in this David and Goliath match that saw the top-ranked Owls lose to the eighth seed in the first round for the second time in school history, the first also being against the 49ers in 2017. According to freshman defender Carsyn Martz, who returned from injury for the match, Charlotte’s persistence made the difference in the game.

“I don’t think it’s my place to say where we went wrong, but it seemed like we were outplayed by our opponent. Respect to them for coming out stronger than we did,” Martz said.

The Owls got off to a quick start with graduate forward Grace Collins putting pressure on the 49ers defense. Her efforts paid off in the 14th minute with a goal just under the crossbar. Despite the early concession, Charlotte picked up their pace and attacked the Owls defense just as quickly. After a series of counter-attack attempts and shots, the 49ers found themselves deep in the Owls’ 18-yard box, consistently challenging senior goalkeeper Bella Killgore. The 49ers were able to catch a rebound off a deflected shot and equalized with a shot to the bottom left corner just past Killgore. While the teams stalled in production for the rest of the half, going into the locker room tied 1-1, the 49ers controlled most of the possession throughout the first half and were able to contain the Owls to just one more shot.

The start of the second half was similar to the first with neither team producing any clear chances. The stalemate was broken by the 49ers in the minute 62 after a cross by their left winger found itself in Rice’s box. While attempting to clear the cross, sophomore midfielder Mikala Furuto clipped the ball at the wrong angle and her attempt flew backwards and over Killgore, giving the 49ers a 2-1 lead. Six minutes later, a chip from midfield into the box found a leaping 49er, heading the ball over Killgore and adding another goal for Charlotte. While the Owls picked up their pace after conceding their third goal, they weren’t able to put away any chances. The closest they were to scoring came with sophomore midfielder Catarina Albuquerque nearly beating the Charlotte goalkeeper from close range, but the ball was too far away from Albuquerque, and her attempt rolled into the keeper’s hands with ease. In the midst of an all-out attack in garbage time, the Owls conceded their fourth goal in the last five minutes of the game, surpassing the total amount they had conceded in the regular season combined against conference opponents. The stark change of form took everyone by surprise, and according to Martz, the team was just as disappointed with the result.

“We were all disappointed to have had such a successful season come to an end so soon,” Martz said.

Despite entering the postseason with eyes set on the conference trophy, the Owls’ earlyy exit from the tournament means that the team’s hope of qualifying for the national women’s soccer championship have been dashed. Further, the first-round loss also marks the the end of the collegiate careers for many Rice players, most notably C-USA Offensive Player of the Year Grace Collins, C-USA Goalkeeper of the Year Bella Killgore and former C-USA Player of the Year Delaney Schultz along with a large group of graduating seniors.