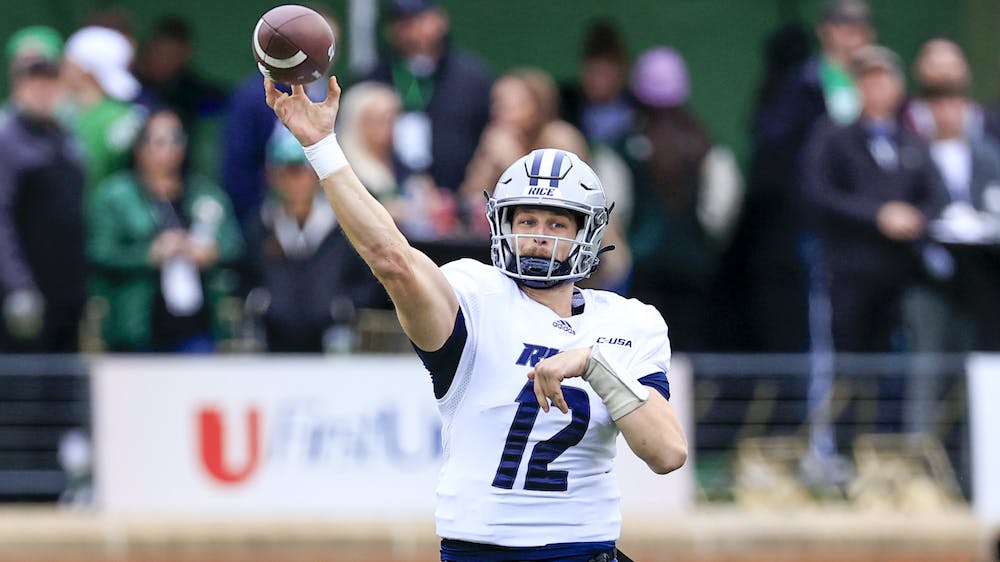 After the game, head coach Mike Bloomgren said that, while he’s upset the team couldn’t get to six wins, he’d love the opportunity to compete with his squad one more time.

“There’s a lot of people that poured a lot into this program over the years and this is not the result any of us wanted, this was not the goal we set,” Bloomgren said, “I told them, if for some reason, as these scores unfold today, if we’re lucky enough to get an opportunity to play in a bowl game, I’d be excited to play this game with them, [and to] put a plan together to go get these guys a win because there’s a lot of seniors that are torn up right now in that locker room.”

As for Saturday’s game itself, the Owls headed to Denton looking to snap a two-game losing streak against a Mean Green team that needed a win to clinch a spot in the Conference USA title game. Freshman AJ Padgett, starting at quarterback in place of injured junior TJ McMahon and redshirt-junior Wiley Green, got off to a slow start, losing a fumble on Rice’s opening possession after a blocked North Texas field goal attempt. However, Padgett said that he wasn’t phased by the turnover.

“Going through the week, my mindset was, ‘man, I play football, I’m going out there to play football,’” Padgett said. “So I was just really excited all week to get out there and play. So the nerves, they were all gone, I got it out of my system early before the game.”

The Mean Green couldn’t take advantage though, and the teams traded punts on the game’s next two possessions. UNT finally broke the tie in the closing minutes of the quarter on a 45-yard touchdown pass from Austine Aune to Jyaire Shorter.

Padgett started to find his footing in the second quarter, leading Rice on a drive deep into North Texas territory that resulted in a missed field goal, before setting up the game tying touchdown with a 46-yard pass to the North Texas six. The Mean Green answered with a quick touchdown drive, but Padgett even the score again, hitting freshman receiver Braylen Walker down the sideline for a 48-yard touchdown. According to Padgett, he was thrilled to help his classmate get his first career touchdown.

“That’s a guy I just love throwing the ball too,” Padgett said. “He’s a freshman, came in with me, so we have that special bond, so that just felt great being able to get him his first collegiate touchdown”

Neither team scored in the third quarter, although Rice drove into field goal range before missing the kick, but it took just two plays for the Owls to take the lead in the fourth on a 24-yard field goal. The Mean Green then marched down the field in eight plays to reclaim the lead on a six-yard touchdown pass from Aune to Ikaika Ragsdale. Rice went three and out on their next drive, but got the ball back with four minutes left after forcing a punt. But a pair of sacks put the Owls at fourth-and-23, and Padgett’s desperation heave was intercepted, effectively ending the game. According to Bloomgren, the Owls had plenty of chances to win at the end but couldn’t take advantage of them.

The loss marked the third in a row for the Owls, and their fifth in seven games after starting the season 3-2. They finish the regular season 5-7 and 3-5 in conference play. After his fifth straight losing season, but also the program’s best total since 2015, Bloomgren said he and his staff have made their case to be brought back for another season.

“Those things are for people above my pay grade,” Bloomgren said. “Progress is clear, it’s defined, but is it enough? Those are for other people to make those decisions. I know what we’ve done, I know what this coaching staff has done, and I would challenge anybody to do better [than] what this group has done on the field and off.”