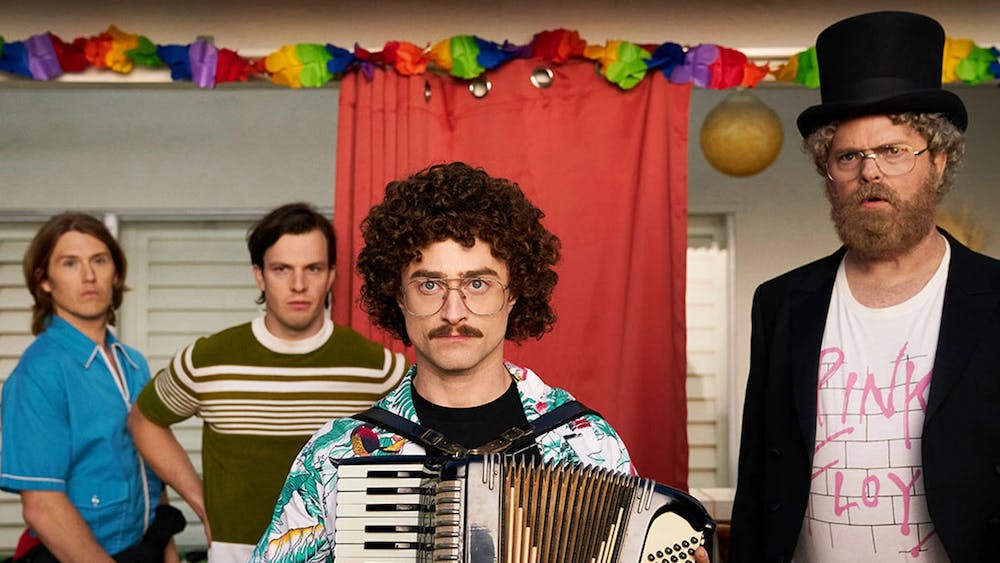 Eric Appel’s 2010 movie trailer spoof from Funny or Die has expanded into a full-length film “biopic” about and co-written with Al Yankovic. Starring Daniel Radcliffe in a curly wig and colorful Hawaiian shirts, “Weird: The Al Yankovic Story” is hilarious, dramatic and, most importantly, almost entirely fictional.

It’s something of an honor to have your music parodied by “Weird Al” Yankovic. His tongue-in-cheek songwriting has earned him numerous accolades for decades. More importantly, Yankovic is known for his graciousness and notable lack of scandals, so it’s unsurprising that when choosing the subject for a film to satirize the drama and scandal-obsessed biopic genre, Appel chose Yankovic.

In the film, Yankovic argues with his parents as a child to play the accordion and write song parodies. Taken to the extreme, his father Nick Yankovic (Toby Huss) nearly beats a salesman to death to keep him from selling an accordion to young Al (Richard Aaron Anderson). Afterwards, Mary Yankovic (Julianne Nicholson) hilariously tells her son with a straight face, “Your dad and I had a long talk, and we agreed it would be best for all of us if you stop being who you are and doing the things you love.” It’s a testament to the actors’ talent how something so callous comes across as even more hilarious through its seriousness.

Nevertheless, his mother ends up buying him the accordion. To his delight, Al Yankovic discovers that he is talented when he is put on the spot at a party and delivers a brilliant accordion performance to thunderous applause. As Yankovic rises to stardom, signing onto record labels and releasing more songs, the attention and wealth go to his head.

Beat by beat, this film satirizes and exaggerates the biopic tropes we’ve grown accustomed to. In recent years, rockstar biopics have evolved into something edgy and dramatic, adhering to the myth that artistic genius goes hand in hand with copious amounts of drugs, alcohol and sex.

“Weird” embraces this to great comedic effect, but it also blurs genres. The film hits the story beats of a father figure arc with Yankovic’s mentor, radio broadcaster Dr. Demento (Rainn Wilson), who first discovers his talents. But the film also hits romantic comedy elements, thanks to a meet-cute and eventual relationship with Madonna (Evan Rachel Wood), This ties together with an action thriller beat when Pablo Escobar (Arturo Castro) gets involved as a Yankovic superfan.

Radcliffe plays both sides of Yankovic with ease, balancing his earnest sincerity with his over-the-top absurdity. Yankovic’s identities develop from an awkward teenager at a party into an older Yankovic tripping on LSD, who in turn becomes a man earnestly telling Madonna he’s in love with her. None of this felt out of the ordinary, as the absurdity scaled with the length of the film.

Radcliffe’s Yankovic is a caricature of the role, but never completely. Although scenes are cut with jokes and asides, the film plays some biopic tropes with such sincerity that it shows the seriousness of Al Yankovic’s involvement and empathy for those who are underappreciated and misunderstood. The film ends with Yankovic telling an audience, “Live the life you want to live. Be as weird as you want to be. Believe me, you will never find true happiness until you can truly accept who you are.” Even if the biopic’s events aren’t to be believed, this life philosophy is.

The film embodies this weirdness, straddling multiple genres all at once, sometimes to great effect but also to irritating extremes: a joke occasionally runs too long or the drama may run dry. However, I applaud the film’s wide range of notes, from fight sequences to music performances to family drama and absurd comedy — “Weird” has it all.

The filmmakers accomplished what they set out to do: parody a music artist biopic about a music artist who parodies other music artists. If that isn’t meta-level comedy, I don’t know what is.