Review: ‘The Banshees of Inisherin’ perfectly balances comedy and drama 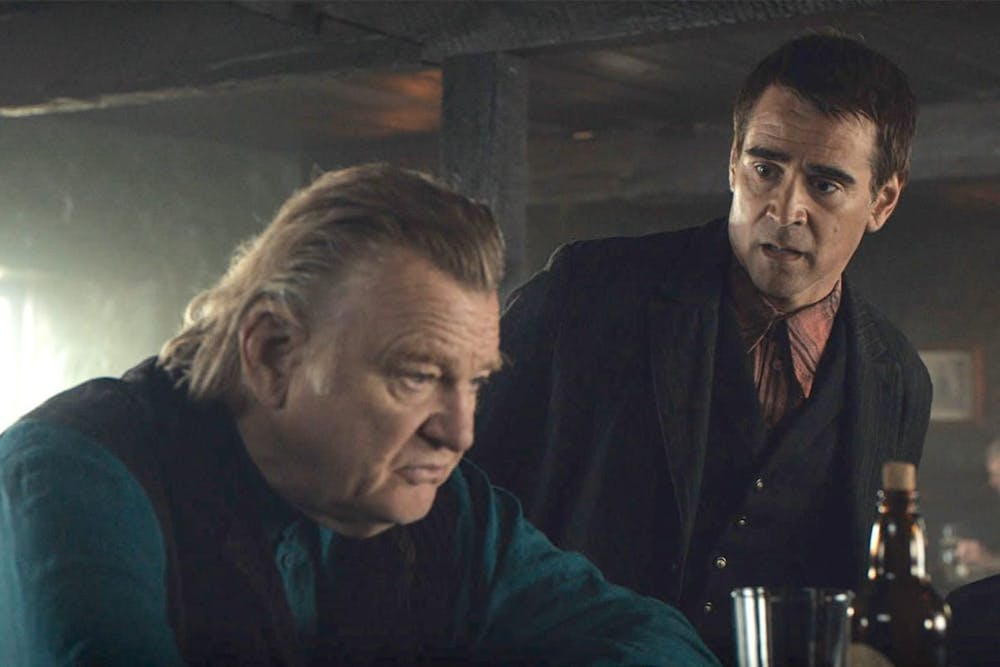 As “The Banshees of Inisherin” begins, the audience is introduced to Inisherin, an island off the coast of Ireland divided into corners for farming by cobblestone walls. For Pádraic Súilleabháin (Colin Farrell), the repetitive cycle of working and then going to the pub is sufficient, as his happy-go-lucky attitude and welcoming demeanor immediately establish. This cycle is interrupted, however, when Colm Doherty (Brendan Gleeson) announces that he will no longer talk to Pádraic, despite the fact they have been best friends for years. This seemingly small decision to break off a relationship ripples across the island, forcing both Pádraic and Colm to reconcile with abandonment and reevaluate who they really are.

The genius in “Banshees” comes from this comical and inconsequential premise. By starting with something small, writer/director Martin McDonagh gets to comedically examine the break-up, and then extract the raw underlying feelings of sadness that come with the drastic change. The balance of these two sides is astounding: the movie was laugh-out-loud funny throughout, but began to fade out the comedic moments in favor of potent dramatic scenes when necessary. The chipper, friendly Irish expressions and interactions that the film draws laughs from fall away as our characters become bitter and spiteful — a contrast that speaks to the inevitability of this transition.

The driving factor for both the comedy and the drama is the performances. Farrell does a great job of portraying Pádraic’s cheery demeanor at the beginning and the desperation his character feels by the end of the film. Each mannerism and expression convey a character that is lovably dopey, yet full of a hidden resentment that is exposed as the film progresses.

Gleeson bounces off these traits perfectly with his portrayal of Colm — the older nature of the character rejects the naiveté of Pádraic through sharp statements and brief conversations filled with disdain. It is very clear that these characters were once friends, as their conversations have a cadence that implies a storied history, but both actors’ spoken deliveries reveal that the content of these conversations is both brand new and catastrophic.

While Gleeson and Farrell are certainly pulling most of the story’s weight, Kerry Condon, Barry Keoghan and the rest of the supporting cast do a great job too. Kerry Condon plays Siobhan, Pádraic’s sister, and Barry Keoghan plays Dominic Kearney, the town misfit and troublemaker. Both characters reflect the loneliness that the island instills into its inhabitants — Siobhan is isolated because of her high level of intelligence and Dominic is ridiculed for his lack thereof. These subplots are woven into the main story perfectly, both literally and thematically. Even though the script deeply explores a handful of characters, the pacing is superb, as no scene feels unnecessary.

The script is the film's main focus — the handful of locations present make it feel almost like a play — but the filmmaking on display elsewhere is solid. The cinematography is well constructed and decidedly subdued for the most part, and the score resonates with the sadness of the story through authentic instrumentation. There is little to complain about, though I wish the film showcased the beauty of Inisherin even more than it did. Furthermore, the emotions of the story are very well established and executed, though I felt that I wasn’t as affected as I should have been. Regardless, “The Banshees of Inisherin” is an incredibly well-presented movie that expertly balances hilarity and tragedy, culminating in a wonderful meditation.