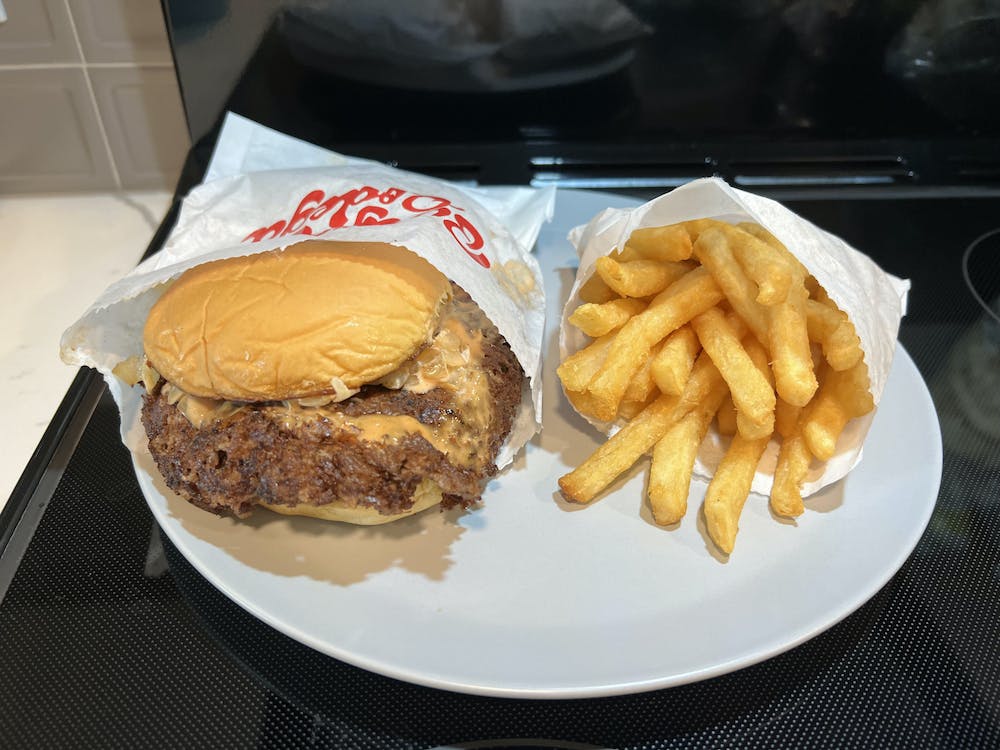 Salt, fat, acid, heat. When evaluating a hamburger, the first two elements of cooking are essential. In fact, they become non-negotiable in cases where the burger is priced above average. In addition to salt and fat, places that strive to serve high-end fast food must deliver on both quality and price. A new competitor has recently taken on the challenge: Burger Bodega, a pop art-inspired Houston restaurant offering a small menu of burgers, fries and shakes, all at higher price points.

Located about a 20-minute drive north of Rice campus, the yellow and white storefront marks the restaurant’s first permanent location, as it was originally founded as a smash burger pop-up in Houston. The pop-up acquired a large following on social media which built up hype for the new store, which officially opened Nov. 3. Since opening night, the restaurant has frequently sold out before closing, and wait times have lasted up to an hour or longer. Compared to traditional fast food burger franchises — think Whataburger, McDonalds and In-N-Out — Burger Bodega is steeper in price, offering items like a $6.50 mango lassi shake and $8.95 fries with chopped beef and cheese sauce. Thus, I had to see for myself if the higher pricing was actually worth it.

Let’s cut to the chase: the burger is good, not fabulous. I ordered the smash burger-double priced at $9.95, which arrives with a potato bun, homemade pickles, grilled onions and bodega sauce. The meat itself is indeed smashed into extremely thin gyro-like patties, so I highly recommend ordering at least a double or triple burger. The potato bun reminded me of Shake Shack’s signature bun, which is almost identical in size and taste. Similarly, the bodega sauce closely resembles In-N-Out’s secret sauce, embodying tomato, mayo and sweet relish flavors. The burger is less greasy than franchise peers and you can taste its higher quality; however, it fails to justify its steeper price since it essentially tastes like a Shake Shack burger.

I also ordered Burger Bodega’s standard fries priced at $3.50, but there are two other versions with interesting toppings like bell peppers and onions starting at $5.95. The fries are fairly traditional, arriving standard cut and undersalted.

Everything at Burger Bodega is high quality and delicious, but the burger especially is not the best value for your budget and time. That being said, the staff, ambience and interior decor are impeccable. Expect lo-fi hip hop, friendly and fast service, neon-lit bar stools and custom pop art decor reminiscent of Andy Warhol. If you are a burger fanatic, it is at least worth a visit to try something new and experience the modern, unique ambience. Otherwise, you’re probably better off going to Shake Shack.