“It’s time to elevate it one more step”: MBB eyes C-USA’s top half 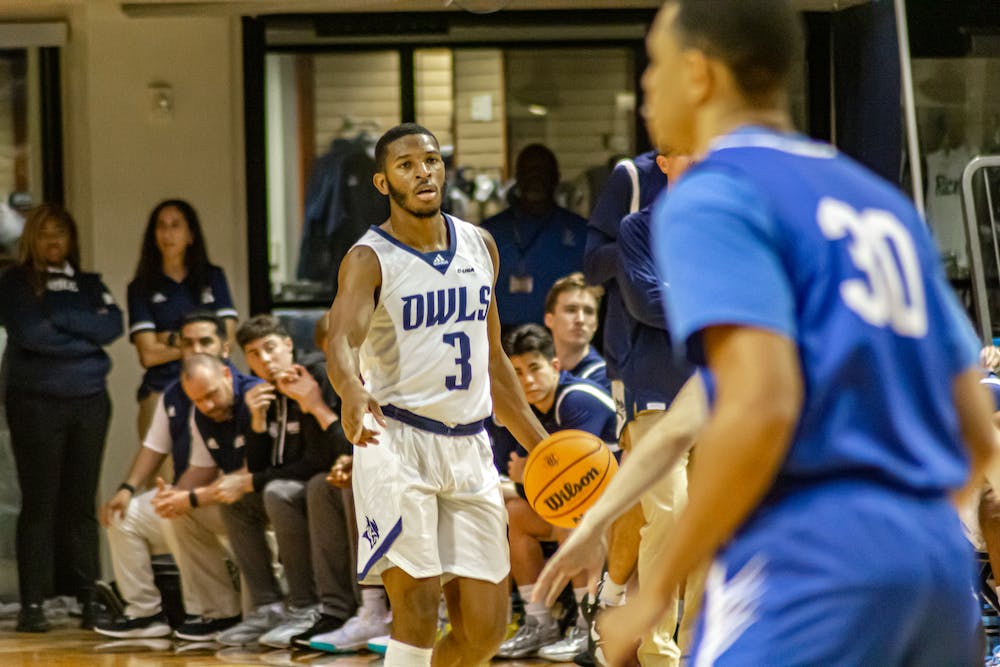 Last year, Rice’s men’s basketball team saw their season slip through their hands as their injuries began to pile up.

“We went into last year thinking we were going to be a pretty good team,” head coach Scott Pera said. “And we were until we lost [now-junior guard] Quincy [Olivari]. We were 14-[9], and on our way to having a big year.”

It wasn’t just Olivari who got hurt, and according to Pera, there were only a handful of healthy players available as the team sputtered to a 2-8 finish in their last ten games.

“We’ve worked really hard at building [depth],” Pera said. “Last year, we thought we built it too and guy by guy went down, and it really got tested. And, you know, we ended up with about eight healthy [players] there at the end.”

The team ended the season 16-17 with a second round exit in the Conference USA tournament. They return much of their entire team from last season, but will need to replace leading scorer Carl Pierre and starting guard Chris Mullins. According to Olivari, they’ve finally added the kind of depth that will allow them to give other teams a variety of looks.

“I think the biggest thing we improved on is depth,” Olivari said. “It allows us to have different rotations and try different things out. I haven’t really thought much into what we lost last year … but we’re gonna miss Carl.”

The team will rely heavily on their trio of returning starters: Olivari, junior forward Max Fiedler, and junior guard Travis Evee. They also brought in freshman guard Mekhi Mason, who Pera said earned a spot in his starting lineup in camp, and sophomore forward Seryee Lewis, a transfer from Kansas State University. According to Olivari, the roster is well rounded enough that the starters can afford to rest without worrying about their back-up underperforming.

“It’s a good feeling, just to know that I can trust the next guy that’s coming to sub-in [and don’t] have to worry about it being a fall off,” Olivari said.

Pera’s teams have historically been built around his fast-paced, floor-spacing offense. Last year, behind a 0.370 three-point shooting percentage, the Owls scored the fifth most points in the conference, but allowed the third most. According to Pera, while he’s had to sacrifice defense to implement his offensive system, he hopes some recruiting moves will help bolster the defense.

“That’s the big cloud over my head,” Pera said. ”We’ve recruited and tried to create an offensive system that … isn’t necessarily conducive to being a great defensive team. And we’ve tried to address that with recruiting guys like Mekhi and [freshman forward] Andrew [Akuchie] and [freshman center Ifeanyi Ufochukwu]. Now we have two big 6’10”, 6’11” freshmen to have better protection at the rim, something we haven’t had a lot of.”

The Owls’ first test of the season will be on Monday when they travel to Malibu to take on Pepperdine University. They will get a preview of conference play eight days later against Middle Tennessee State University, before hosting a three-team invitational in mid-November. However, the real test of their non-conference schedule will come on Dec. 12 when they take on the University of Texas at Austin. According to Evee, this slate will help them get ready for conference play, which starts on Dec. 29.

The team has been competitive in conference play in recent years, but according to Pera, they can’t become complacent with middle-of-the-pack finishes and 0.500 records.

“The one word I’ve used over the years is sustainable,” Pera said. “I think we have a sustainable program and now it’s time to elevate it one more step.”