Injuries and INTs: Football crushed by WKU in turnover-fest 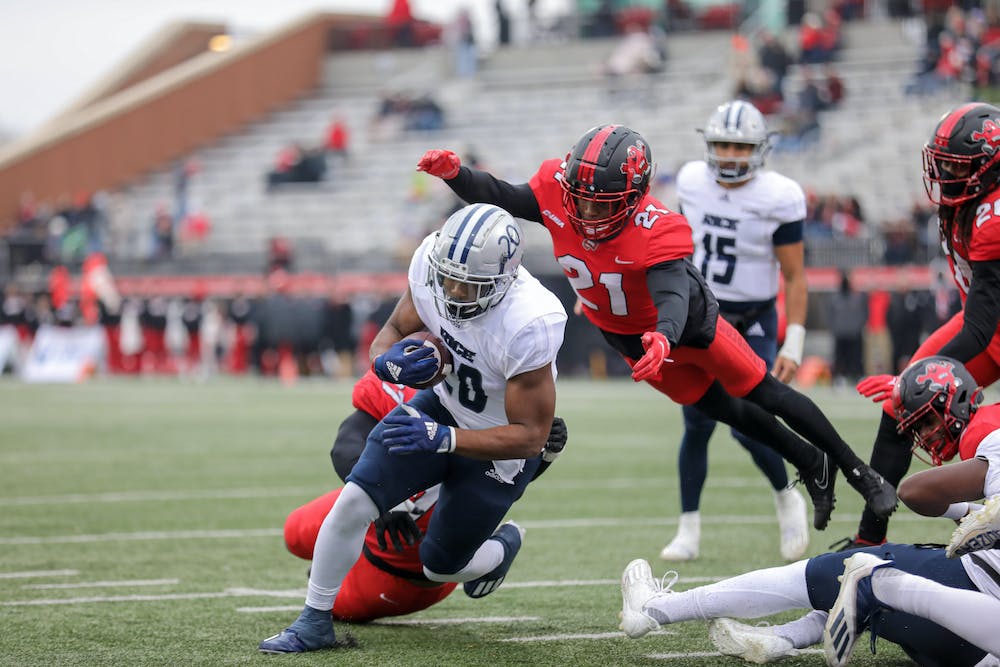 The Rice football team lost to Western Kentucky University 45-10 on Saturday afternoon, dropping them to 5-5 on the season and 3-3 in conference play. The Owls struggled on both sides of the ball, with the offense recording six turnovers and the defense allowing 495 yards. According to head coach Mike Bloomgren, the team just didn’t play very well.

“We picked a bad day to have a bad day,” Bloomgren said. “I think we were playing a really good football team, and I don’t think we were surprised by how good they were. At the end of the day, we lost some one-on-ones that we needed to win.”

The Owls found themselves down seven early with the Hilltoppers scoring on a five-play, two-minute opening drive. On their first possession of the game, the Owls responded with a long drive. However, junior quarterback TJ McMahon threw a redzone interception and the Owls came up empty. The Owls returned the favor when redshirt freshman cornerback Lamont Narcisse recorded his first career interception off of Hilltoppers quarterback Austin Reed. Getting the ball back, the Owls’ were driving as the first quarter came to a close.

Three minutes into the second quarter and deep in Hilltopper territory, McMahon threw his second interception of the game as the Owls failed to score for the second straight drive. The home team capitalized on the turnover with a 62-yard passing touchdown, giving them a 14-0 lead. The game went from bad to worse when the Owls found themselves down 21-0 after a McMahon strip sack was returned by the Hilltopper defense for a touchdown. Injured on the play, McMahon was replaced by redshirt freshman Shawqi Itraish, who led the Owls’ offense for the rest of the game.

Following the game, Bloomgren said it was too early to tell if McMahon would be available going forward.

“I don’t want to say anything,” Bloomgren said. “I don’t have a good enough vantage point right now. I know he was in the tent. Then, they thought that he could play, and then his strength was limited. I don’t even know what they believe the injury is. It would be irresponsible of me to say anything about it right now.”

Itraish had an immediate impact as he guided the Owls down the field, leading them to their first score of the game when graduate running back Uriah West ran for a 1-yard touchdown, making the score 21-7. With only 32 seconds left in the half, the Hilltoppers drove 68 yards down the field and made a 25-yard field goal to give the hosts a 24-7 lead entering the half.

According to Bloomgren, the Owls’ defense struggled on third downs, an issue that contributed to the loss.

“Defensively, I think our first and second-down play in the first half was pretty good,” Bloomgren said. “They converted six to seven third-downs in that first half, three of which were third-and-long. Those are just backbreakers. You can’t win football games if you can’t get off the field and if you turn the ball over on offense.”

Receiving possession at the start of the second half, the Owls put together a seven-minute and 26-second drive, ending with a 26-yard field goal to cut the lead to 24-10. However, the Hilltoppers responded quickly and scored a touchdown in less than three minutes to make it 31-10.

On the third play of the fourth quarter, Itraish threw an interception, continuing the Owls’ turnover woes. Sophomore defensive back Gabriel Taylor prevented the Hilltoppers from building on their lead after forcing a fumble on the Hilltoppers’ next possession, but the Owls’ offense was unable to take advantage and went three-and-out. Rice punted the ball back to the Hilltoppers, who returned the punt for a touchdown, making the score 38-10. On their next possession, the Owls once again turned the ball over when redshirt senior running back Cameron Montgomery fumbled the ball. The home team built upon their lead following the turnover, making the score 45-10 on a short passing touchdown. Itraish threw his second interception of the day on the Owls’ next possession, effectively ending the game.

Needing one more win to clinch a postseason berth, the Owls only now have two more opportunities to qualify for their first bowl game since 2014. The Owls will play their last home game of the season against first-place University of Texas, San Antonio on Nov. 19 at 12 pm and then face off against second-place University of North Texas on Nov. 26.