Dancing in December: Volleyball a 5-seed in NCAA tournament after winning conference 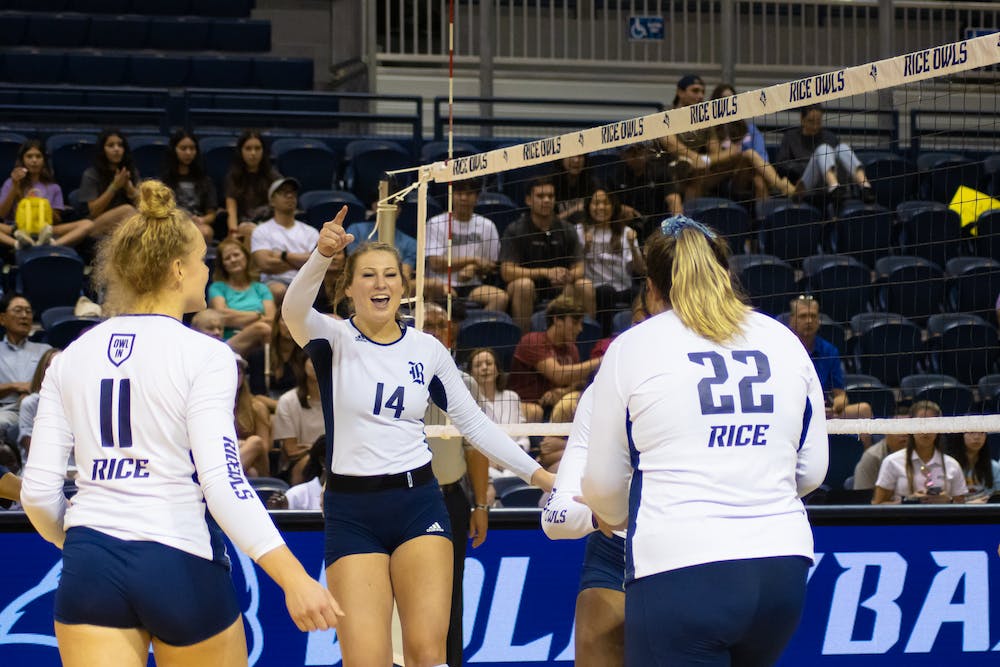 For the fifth season in a row, Rice is playing volleyball in December. On Sunday, the No. 20 Owls were announced as a No. 5 seed in the quarter of the bracket hosted by the University of Louisville when the NCAA Division I Women’s Volleyball committee announced the NCAA tournament field. The Owls will start off tournament play in the Waco regional against the University of Colorado on Dec. 1. After receiving their bid, head coach Genny Volpe said that the team is excited and ready to compete.

“It’s always exciting to see your name pop up on the big screen,” Volpe said. “We’re excited to go and play at Baylor.  We’re just ready to get back in the gym and get to work.”

If the Owls defeat the Buffaloes, who finished fifth in the Pac-12, they would move on to the round of 32 to face the winner of Stephen F. Austin University and the No. 4 seed Baylor University. According to fifth-year senior and Conference USA setter of the year Carly Graham, their first round match-up will be a good challenge for the Owls..

“Colorado is in a great conference so I know they’ve been playing great teams all season,” Graham said. “To make the tournament, you have to be a great team. We’ll definitely get a good scout in and go out there and compete.”

As the newly crowned C-USA champions, the Owls earned an automatic qualifier bid thanks to their 3-2 victory against Western Kentucky University in the conference tournament championship game. The Owls ended the season with a record of 26-3, with numerous matches against ranked opponents, including their potential second round matchup Baylor. The Owls were swept by the Bears the last time the teams met.

Graham said that playing against the top competition is the most exciting part about postseason volleyball.

“Postseason is a lot of fun,” Graham said. “You’re playing against great competition, and it’s just a really competitive atmosphere. We’re all super excited to go play and compete against high level competition.”

The Owls’ senior class, led by Graham and middle blocker Anota Adekunle, is no stranger to the NCAA tournament. They’ve earned a postseason bid in each of their five years at Rice, and Volpe said that the senior veteran leadership will be crucial to the Owls’ success this week.

While the Owls have been frequent fliers at the NCAA tournament, they have yet to make it past the second round. According to Volpe, making it to the tournament is not enough this year, the team is looking to make a deep run.

With her final tournament approaching, Graham says that she wants to leave it all on the court and keep her Rice career going.

“We want to leave everything out there and play Rice volleyball the way we know we can,” Graham said.  “I think we’re just really excited to go compete against awesome competition and looking forward to playing together and hopefully keep playing together as long as possible.”

In her 19th season at Rice, Volpe is making her eighth NCAA tournament appearance. Following Sunday’s selection show, Volpe expressed how proud she was of the team’s fight and perseverance throughout the entire season.

“I’m so proud of this team,” Volpe said. “We’ve put in a lot of work this year, and we’ve battled through a lot of tough matches and came out on top. It’s been a joy to coach this team, and we’re gonna go as long as we possibly can to keep this season going.”