They’re lovin’ it: FB’s McConnection leads them past LA Tech 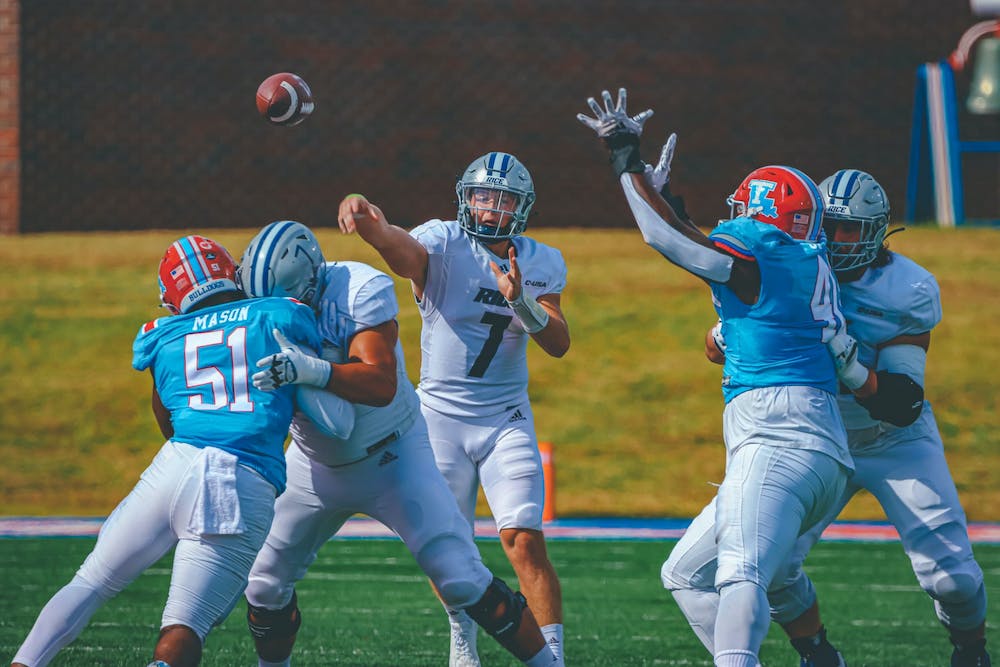 Before junior quarterback TJ McMahon hit redshirt sophomore receiver Luke McCaffrey behind two Louisiana Tech University defenders for a 32-yard touchdown with just over two minutes before halftime on Saturday, Rice’s offense hadn’t scored a point in their last hour-and-16-minutes of game-time. But after going down 10-0, the Owls scored 42 points in the next 35 minutes to leave Ruston, LA with a one-point overtime win. According to McMahon, the touchdown kickstarted the offense going into halftime.

“You can’t get shut out in the first half,” McMahon said. “Points are always big. As you can see, the tides will turn when points come that way … We were like, ‘Hey, we’re still in this game,  it’s a three-point deficit that we’re at, we can always come back.’”

Prior to McCaffrey’s touchdown, both teams’ defenses were the story of the half. A 49-yard run set up a short touchdown on the Bulldog’s first drive, and good field position allowed them to get three points out of a 13-yard drive five minutes later. But after losing their starting quarterback Parker McNeil halfway through the first quarter, the Bulldogs offense came to a halt, and three combined turnovers, including a fumble by the Owls’ senior running back Ari Broussard at the goal-line, kept both teams off of the scoreboard for the bulk of the half.

The second half was a different story. While Louisiana Tech went three-and-out on their first drive of the half, their punt was fumbled by Rice’s returner, sophomore cornerback Sean Fresch, and led by backup quarterback Matthew Downing, LA Tech took advantage with a touchdown five plays later. The Owls answered though, with a 45-yard run by redshirt senior running back Cam Montgomery that set up a touchdown pass from McMahon to redshirt senior receiver Bradley Rozner. The teams traded touchdowns once again, with Rice’s drive being highlighted by a McCaffrey 66-yard catch and run, before a LA Tech field goal brought their lead to 27-21 going into the fourth.

A penalty negated a fourth-down conversion on Rice’s first drive of the quarter, forcing a punt, but the Bulldogs gave the ball right back after a three-and-out. Then McMahon took matters into his own hands, faking the handoff and splitting the heart of the LA Tech defense for a career-long 64 yard touchdown run. According to head coach Mike Bloomgren, the touchdown was a result of a subtle tweak by the coaching staff.

“It was a great job by our coaching staff on the sideline, saying how much the defensive end was bending on the plunge [run] plays and then TJ got loose and did the rest himself,” Bloomgren said.

Another LA Tech three-and-out gave Rice the ball back with a one-point lead, and a nine play, 70-yard touchdown drive, capped by a 17-yard McCaffrey touchdown run out of the wildcat, stretched their lead to eight with four minutes remaining. Bloomgren said that the team is going to try to take more advantage of McCaffrey’s versatility, but he doesn’t want that to take away from his performance at receiver.

“[Lining up McCaffrey in multiple positions] is something we talked about when Luke first made the switch [from quarterback to receiver] and now we’re starting to get more comfort and I think we’re starting to see more of those opportunities down the field.” Bloomgren said. “But what a phenomenal job he did as a receiver today, from getting open and making plays after he caught the ball.”

But LA Tech wouldn’t go away just yet. The Bulldogs marched the ball down to Rice’s 34-yard line, where a roughing the passer penalty extended their drive while knocking Downing out of the game. Third-string quarterback Landry Lyddy found receiver Cyrus Allen, who made a leaping catch in double-coverage just inches away from the sideline to bring the score to 35-33. Not to be outdone by his teammate, receiver Tre Harris snagged Lyddy’s pass on the ensuing two-point-conversion with one hand to force overtime.

It took the Owls just three plays to score in overtime, after redshirt junior Juma Otoviano’s 19-yard run on second down set up his own four-yard touchdown on the next play. The Owls defense forced a fourth-down on the Bulldogs’ next drive, but on the decisive play, Lyddy found Harris for the receiver’s third touchdown of the game. However, instead of tying the game with an extra point, LA Tech opted to try to win the game with a two-point conversion. Lyddy threw a fade to his left, but his pass sailed well over his receiver’s head, and the Owls left Ruston with a 42-41 comeback win. According to Otoviano, who’s been buried on the depth chart for much of the season, the game winning score meant a lot to him and his team.

“It feels amazing,” Otoviano said. “More importantly, I’m just happy that I was able to help my team out today.”

The win moves the Owls to 4-3 (2-1 in the conference) and puts them squarely in contention for a bowl game. They return home to face the University of North Carolina at Charlotte on Saturday at 1 p.m.