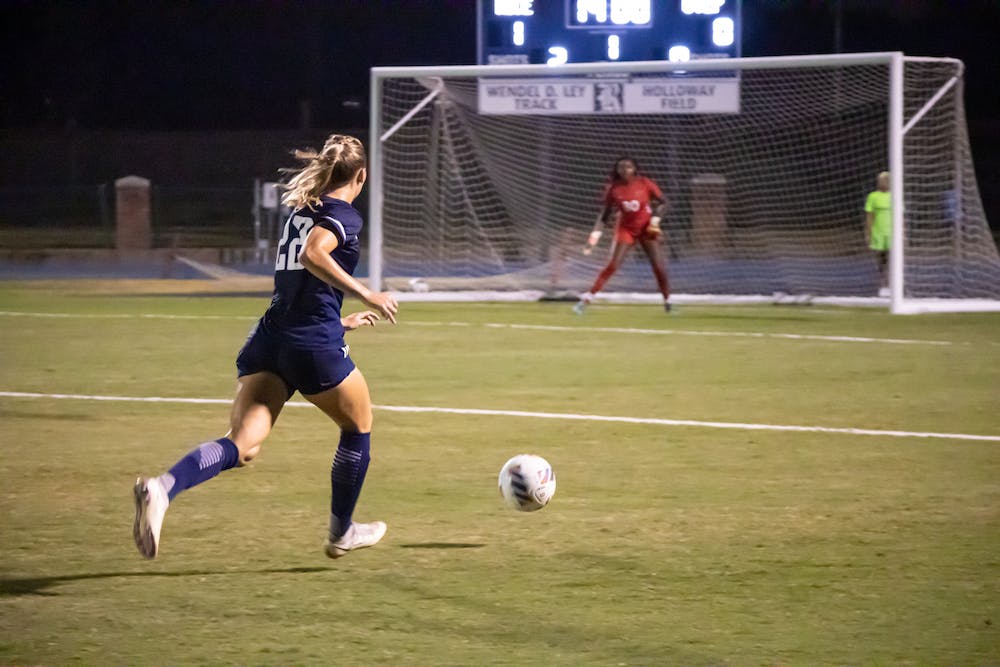 After winning just two of their eight non-conference games to start the year, the Rice soccer team has won all seven of their games in conference play, allowing just two goals in the process. Over the weekend, the squad defeated the University of Texas at El Paso 2-0 at home and the University of North Carolina at Charlotte 1-0 on the road, with all three goals being scored by graduate transfer forward Grace Collins. While leading the team in both goals and assists this season, Collins attributed the Owls’ conference success to head coach Brian Lee and his emphasis on unnoticed details in each game.

“I think we’re just really buying into what Brian’s telling us and just working on the little things everyday that’s paying off during the games,” Collins said.

Heading into Thursday’s game against UTEP, Lee became only the 13th active coach to reach 600 career Division I career matches. Despite losing starting center back freshman Carsyn Martz to injury in a previous game, the milestone was not spoiled for Lee and the Owls. Sporting the 3-2-4-1 formation that they’ve stuck with since the start of conference season and replacing Martz in defense with sophomore midfielder Mikala Furuto, the Owls got off to a fast start with Collins and senior midfielder Delaney Schultz connecting twice within the first five minutes. While their first build-up was halted by the Miners, they could not deny Collins on the second go. Schultz set Collins up with a through pass threading the UTEP back four, and Collins’ shot found the bottom right corner of the goal, putting the Owls up 1-0.

Rice kept the high pressure and produced more scoring opportunities for the rest of the first half, but they were unable to beat the UTEP keeper. While the shot tally was almost even at the end of the first half, the Owls controlled possession and kept the Miners away from their goal for most of the half. The Owls picked up right where they ended to start the second half, continuing with high pressure and maintaining possession. Their efforts paid off just five minutes into the half when Collins found herself inside the 18-yard box. After receiving a pass from freshman midfielder Kallie McKinney and dribbling past the UTEP defense to the right of their goal, she cut inside, setting herself up for a left-foot shot that found itself just inside of the post.

The Owls held on to the shutout to win their sixth straight conference game. The team struggled with injuries and losses in the beginning of the season, and according to Lee, having a healthy squad has made the biggest impact on the results.

“[I attribute the success to] just getting healthy and getting our players back,” Lee said.  “Tonight was a little tougher with Serena [Pham] and Carsyn [Martz] out, [but] really that’s the key to the turnaround, having health.”

Junior defender Shelby DesRoches, who’s been playing defense this season, said that she believes the season’s turnaround can be explained by better communication and familiarity throughout the field.

Following UTEP, the Owls traveled to North Carolina to face Charlotte, attempting to  win seven straight games for the second time in school history. This clash, however, proved challenging for the streaking Owls. Charlotte was aggressive from the first whistle and broke through the Owls’ back three, testing senior goalkeeper Bella Killgore early. Rice was kept on their heels for most of the first half, with only one scoring opportunity from Schultz, which was blocked by the Charlotte defense. The Owls’ chances flipped at the start of the second half, however. After receiving a through pass from sophomore midfielder Catarina Albuquerque, Collins was behind the Charlotte line and alone with the 49ers’ keeper inside their box; a shot to the right side of the goal lifted the Owls up 1-0. The rest of the game continued to be controlled by the 49ers, but all of their efforts were stopped by Killgore who finished the game with nine saves to secure Rice’s third straight shutout.

Despite the team’s current form, Lee said that he wants to assess each game individually before looking ahead to the conference and NCAA tournaments.

“[We want to take it] game by game right now,” Lee said. “We wanna finish as high as we can in the regular season and give ourselves a chance to win the league. We’ll worry about the tournament when it gets here.”

According to DesRoches, the Owls need to keep their focus on upcoming road games to ensure their success beyond the regular season.

“[We need to] keep winning these games on the road,” DesRoches said. “We have a couple of big games, [two] out of town games, and I think those are the harder games to win, so [we are] looking forward to performing well and hopefully being [Conference-USA West] champs.”

The Owls return to Holloway Field on Thursday, Oct. 20 for Senior Night against Western Kentucky University in their final home game of the season.