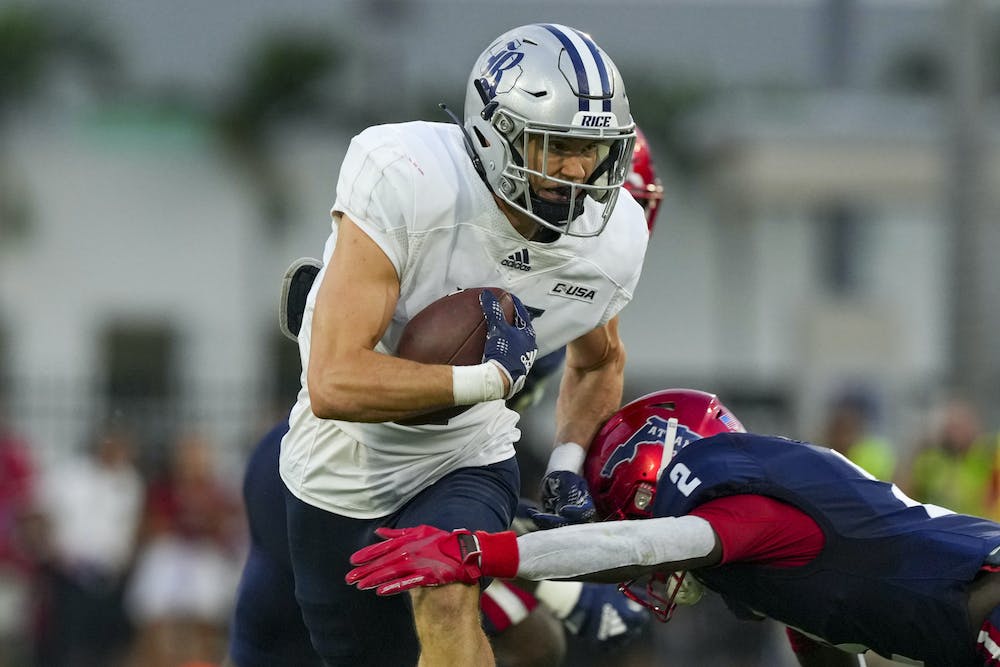 Rice football was defeated 17-14 by Florida Atlantic University on Saturday night, moving their overall record to 3-3 and marking their first conference loss this season. Coming off their bye week, the loss on Saturday continued Rice’s winless road record this season. After scoring 14 points in the first quarter, Rice’s offense was unable to score for the remainder of the game as FAU responded with 17 unanswered points. Head coach Mike Bloomgren said that while the defense did well to stymie the home side, the offense’s failure to score points was the main culprit in the loss.

“I thought our defense kept performing and kept performing,” Bloomgren said. “They gave everything they had tonight. I mean all [our offense] had to do was get in field goal range to keep this game alive or score [a] touchdown and win it. It wasn’t a big ask that we were making of our offense. We just needed them to be efficient, put a drive together and we would have some really good chances to have a different outcome.”

The game got off to a slow start for both offenses with both Rice and FAU going three-and-out on their first drives of the game. On the fourth play of Rice’s next possession, junior quarterback TJ McMahon hit redshirt senior wide receiver Bradley Rozner down the right hash mark. Rozner broke a tackle and outran the FAU defense for a career-long 78-yard touchdown reception, giving Rice a 7-0 lead five minutes into the game. After the defense forced FAU to punt, McMahon and the Rice offense built a five-minute drive that was capped by a three-yard rushing touchdown by redshirt junior Ari Broussard, giving Rice a 14-0 before the first quarter ended. With that score, Broussard recorded a touchdown in six straight games this season, the second-longest streak in the nation. Despite the lack of offense for the majority of the game, Bloomgren applauded his team’s offensive start to the game.

“I thought the second and third drives were exceptional,” Bloomgren said. “The play to [Rozner] was a great design by [offensive coordinator Marques Tuiasosopo] and truly great execution.”

After that touchdown, both FAU and Rice traded punts with each other. FAU, who had possession at the end of the first quarter, got on the scoreboard three minutes into the second quarter when junior running back Larry McCammon III ran five yards into the endzone, halving Rice’s lead. Despite turnovers by both Rice and FAU, neither offense mustered any points during the rest of the first half. Rice’s three drives in the second quarter resulted in just 41 yards gained, a turnover on downs, a punt and a McMahon interception. FAU was unable to turn the interception into points after missing a 42-yard field goal attempt to end the first half.

At the start of the second half, the FAU received the ball and spent about six and a half minutes driving down the field before settling for a 34-yard field goal to cut the Rice lead to 14-10. Following the FAU score, Rice’s offense continued to struggle and punted the ball back after picking up just one first down. Taking advantage of a lackluster Rice offense, FAU marched down the field to the Rice 8-yard line. However, junior safety Kirk Lockhart forced a fumble on third-and-goal with 16 seconds left in the third quarter, protecting the Rice four-point lead.

Rice was unable to capitalize on the fumble recovery, going three-and-out and punting the ball right back to the home team. This time, the Rice defense was unable to contain the FAU offense, who went down the field and scored after quarterback N’Kosi Perry threw an 18-yard touchdown pass, giving FAU a 17-14 lead. On their next drive, Rice was close to scoring, advancing deep into FAU territory. However, a McMahon pass to redshirt-sophomore wide receiver Luke McCaffrey was broken up in the endzone and fell into the hands of a diving FAU defender. After the turnover, FAU failed to move the ball down the field and punted, giving Rice another offensive opportunity. However, another McMahon pass to McCaffrey in the endzone, this one a nearly 50-yard heave, was intercepted, effectively ending any chance of a Rice comeback. A last-ditch drive for the Owls ended in a turnover on downs, sealing the loss.

Redshirt senior offensive lineman Shea Baker said that this game highlighted the importance of the offense being more reliable so that they can balance out the strong play of the defense.

“Our defense balls out for us every play,” Baker said. “So we have to do better and be more consistent so that we play complementary football in all three phases.”

Next up, Rice will travel to Ruston, LA to play against the 2-4 Louisiana Tech University Bulldogs at 2 p.m. on Saturday, Oct. 22.