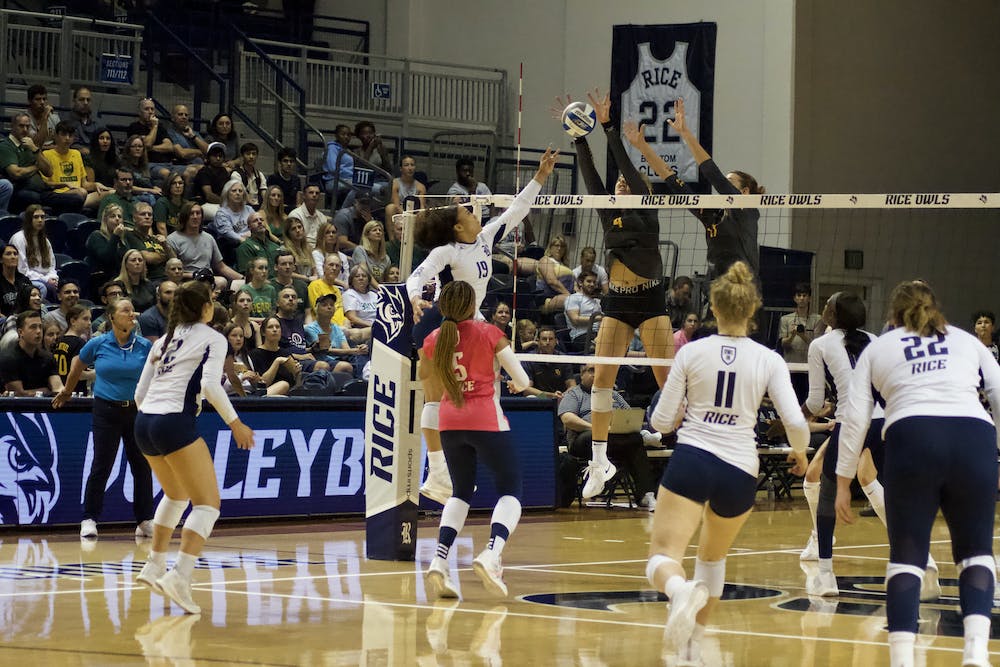 When the Owls dropped the first two sets against No. 18 Baylor University on Wednesday, it felt like the same position they had found themselves in numerous times in a season that’s already featured five comeback wins. But instead of the Owls pulling off their third reverse-sweep of the year, the Bears won set three to clinch the sweep (18-25, 22-25, 17-25). Entering the match ranked No. 22 in the American Volleyball Coaches Association poll and No. 10 in the Rating Percentage Index, the loss ended the Owls’ 11 game win streak. Following the match, head coach Genny Volpe was disappointed by the Owls’ inability to match Baylor’s efficiency.

"We just never really got in a rhythm offensively,” Volpe said. “It really hurt us because Baylor is an efficient team. They're a solid team. They're consistent both defensively and offensively. I was disappointed in our lack of production on offense. I thought it would be better. Overall, we got beat in pretty much every area.”

In a back and forth first set, neither team could gain an edge until a late run gave the Bears the advantage they needed to take a 1-0 lead. Throughout the season, slow starts have plagued the Owls, but most of the time, they have been able to recover later in the game. However, after today’s loss, fifth year senior setter Carly Graham said that the team needs to work on bringing the energy right from the first serve.

The Owls seemingly found their spark in the second set, fueling two big runs that gave them an 18-17 lead at one point. After 13 ties and seven lead changes, the set was tied at 21, but a 4-1 Baylor run quickly ended it. With the Owls tantalizingly close to taking set two, Volpe said that the set loss shifted the momentum of the game.

“I think if we could have pulled out set two, I think it would have made a huge difference,” Volpe said. “We had some opportunities there but that's how the game of volleyball goes. It's a game of momentum and unfortunately, we just could never take control of it.”

With the momentum in Baylor’s favor and no answer for the big Bear runs, the Owls dropped set three and the game. Volpe said that the team didn’t show the same fight when they found themselves in a hole as they had in their earlier comebacks, including one against then-No. 18 Creighton University.

“What was most surprising is that we didn't really show the resiliency that we've shown when our backs have been up against the wall,” Volpe said.

Overall, Rice’s 18 errors and season low in offensive efficiency (0.156) hindered the Owls. According to Volpe, being out of system and issues with timing led to the poor offensive performance.

“We were out of system quite a bit,” Volpe said.  “I don't think that our timing was great. We didn't take advantage of the opportunities in front of us defensively like hitting some [open] shots. And I think that when we were in system, we could have put the ball away more.  Collectively as a unit we just have to be more efficient on offense.”

The game was the Owls’ third match this season against a top 25 team. If the Owls want to make a deep postseason run, they will have to face off against high caliber opponents and according to Graham, the team still is confident they can compete with the top teams in the country.

“We definitely feel like we belong with [teams like Baylor] and in the top 25,” Graham said. “We have the confidence that we belong here. I think we all know we can do better and we didn't perform the way we are able to. I think we'll just reflect on this, learn from it and be ready for those opportunities … throughout the rest of the conference tournament and then hopefully the NCAA tournament.”

“We know that we didn't perform well today and … we just have to learn from that and recognize that we can be better in certain areas,” Volpe said. “I believe in this team and I I believe that they're going to make those changes. They know what it takes to win at a high level and so we just need to clean some things up. It's a good wake up call for sure.”

The Owls bounced back with wins against the University of Alabama at Birmingham and the University of North Carolina at Charlotte over the weekend to bring their record to 17-2 and 7-0 in conference. Graham’s 50 assist performance against Charlotte, her fifth of the season, earned her second consecutive C-USA Setter of the Week award while fifth-year senior middle blocker Anota Adekunle joined her on the award podium with the second of back-to-back C-USA Offensive Player of the week.

The Owls, now ranked No. 21 in the nation, return to the court this Friday at home against Florida International University at 6:00 where they’ll look to keep their undefeated conference record alive.