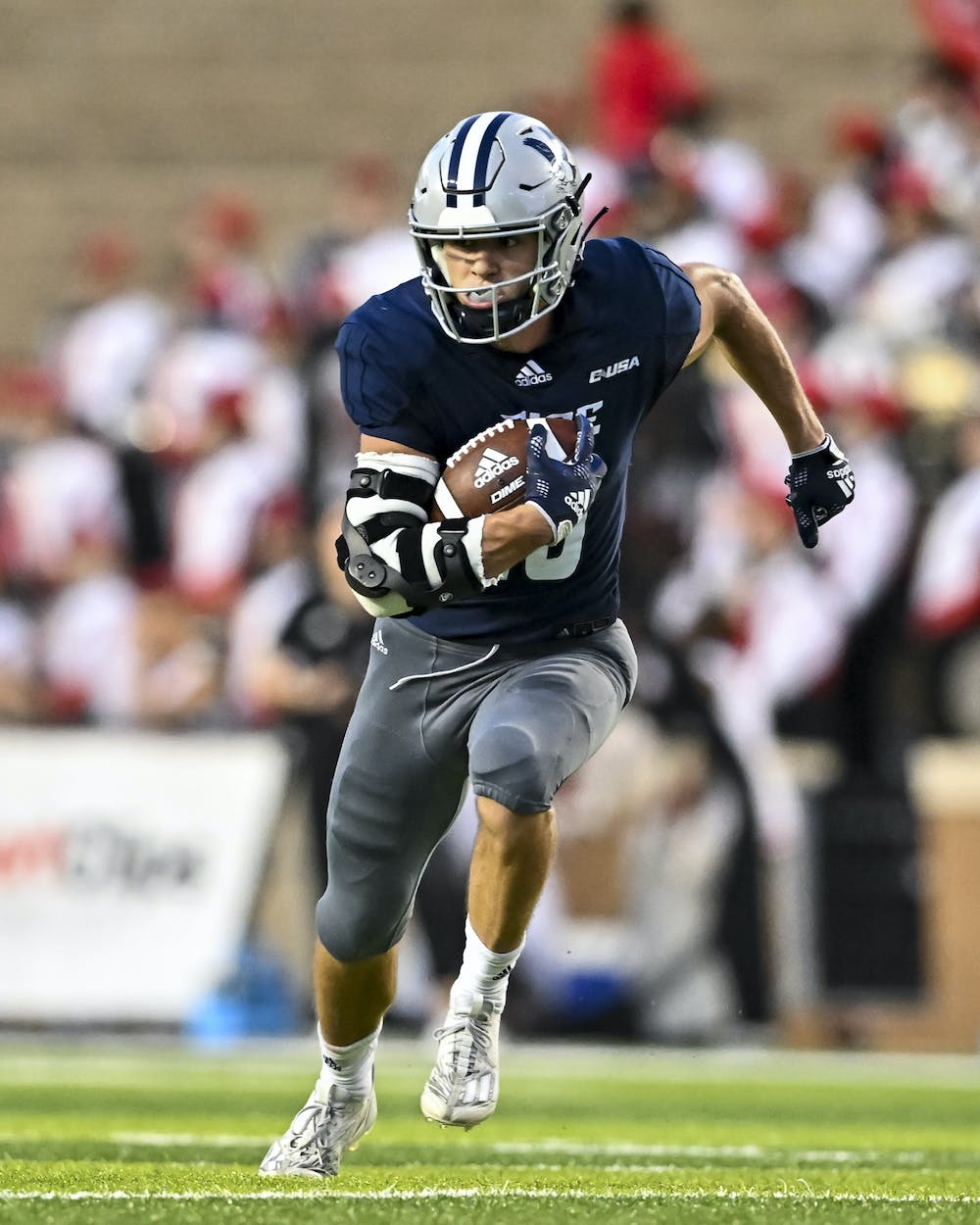 Redshirt sophomore wide receiver Luke McCaffrey has starred in a leading role for Rice’s football team this season – fitting for someone who describes himself as a movie buff through and through.

“I love making films,” McCaffrey said. “I have a hidden Youtube channel with scraps that I have made. I haven’t really shown anyone, probably because I’m too embarrassed. Growing up, the two things that influenced me the most were movies and sports and so that is kind of where I have always shifted my energy towards.”

Depite donning navy blue and grey on Saturday afternoons, McCaffrey still makes time for his other passion. When he wasn’t playing sports growing up, McCaffrey, who named Wes Anderson and Christopher Nolan as his favorites, loved to write and direct small movies with his brothers and loved to watch classic films.

McCaffrey has written some Nolan-esque plot twists into his college football career so far. After beginning his career as a four-star quarterback at the University of Nebraska, McCaffrey transferred to Rice after his redshirt-freshman year. McCaffrey said he has cherished his time at South Main so far and appreciates Rice’s rich culture.

“It has been a blast,” McCaffrey said. “It was a transition at first, not going to lie. It was super different – coming from a small town with a huge school to a big city with a smaller school has been a unique experience. But, I think that the culture built around Rice, the history and the tradition that is everywhere … is something that you don’t see at most schools. Just to be a part of that is something that is a blessing.”

Before eventually joining Rice from Nebraska in the summer of 2021, McCaffrey briefly committed to University of Louisville. When reflecting on his last-second decision to come to Houston, McCaffrey said that Rice’s community attracted him.

“It was an interesting situation,” McCaffrey said. “I was committed [to Louisville] and right at the last second, I had a change of mind. Rice, being the school that it is and the community that it is, for some reason attracted me. Since I’ve been on campus, all of that has been built into a conviction that I love this community. I love Rice, I love Houston. Making that decision, while being one of the harder decisions that I have made … as time has gone on, I think the confidence in making that decision just really turned into a stronger peace.”

After struggling with injuries and inconsistency at quarterback last year, he made yet another change, switching to receiver. In his first year in the new role, he has emerged as a star, ranking in the top-ten in Conference USA in every major receiver category. According to McCaffrey, he’s taken to the switch just fine.

“It’s been a fun transition,” McCaffrey said. “You come into contact with a lot of people in different ways when you switch positions. It’s been so fun to learn and it has been so fun to continue to grow. [Being a quarterback] has helped me see everything to a certain extent. I think the biggest thing is communication. Whether it is Wiley [Green] before he got hurt, or TJ [McMahon] now, it helps that you can speak the same language with the guy who is playing [quarterback].”

After beating Louisiana Tech University behind McCaffrey’s 200-yard, three-touchdown performance, the team has already matched their win total from last year. However, according to McCaffrey, the team must stay mentally strong so they don’t get too far ahead of themselves.

“When you look week-to-week, I don’t think that there is a team on our schedule that we can’t beat,” McCaffrey said. “Obviously, our goal is to make a bowl game, but if you get too focused on that, we almost get into our heads a little bit and overthink.”

As he settles into his new school and new position, McCaffrey looks to be past his career’s most dramatic plot twists. But according to McCaffrey, it’s the characters, not the plot, that make a movie great anyway.

“I love a lot of the narrative stories and any story built around characters,” McCaffrey said. “Even if the plot isn’t great, if you add a solid character, I’ll love it.”