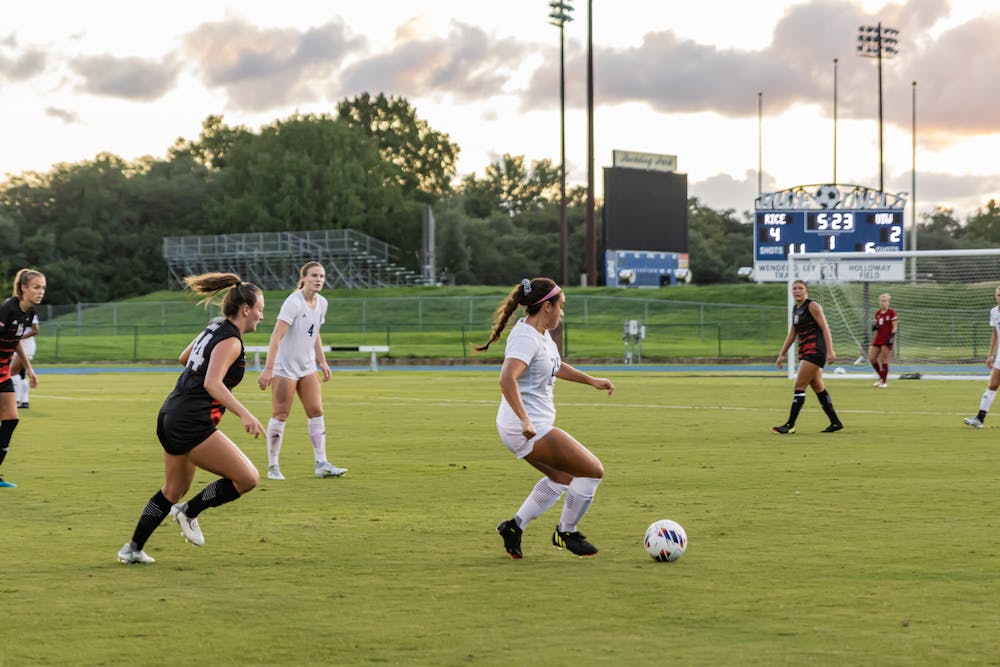 “I thought we stuck to the game plan and defended very well,” Lee said. “We had good communication. It was a good training environment as we get ready for the stretch run of conference play, especially being able to defend that well against a good team.”

The Owls and the Aggies were in a stalemate for a majority of the game with both squads goalless well into the second half. While they were out-shot 9-3 in the first half, the Owls had a few key scoring opportunities but failed to capitalize. In the 21st minute of the game, the Owls had their first real scoring chance of the day when graduate transfer forward Grace Collins was unable to convert a pass from senior midfielder Delaney Schultz. Ten minutes later, Schultz was in a good position to score after intercepting a pass from the goalkeeper but overshot the ball, leaving the game scoreless. Nearing the end of the first half, in the 44th minute, the Owls had another chance to take the lead when junior midfielder Shiloh Miller crossed the ball into the box but was quickly snatched up by the Aggies’ goalkeeper.

Rice started the second half aggressively, putting pressure on the Aggies. Collins, who ended the day with three total shots, with only one on target, missed the goal again in the 46th minute of the game. The Aggies responded with a strong offensive push but were unable to score with Killgore making several critical saves throughout the second half. However, the deadlock was broken when Aggie junior midfielder Kate Colvin was able to score from a free kick in the 78th minute. Despite the Owls’ persistent efforts to level the score up in the final 12 minutes, the squad was unable to tie up the game. Rice was especially close to returning the favor in the 80th minute when senior goalkeeper Bella Killgore whipped in a free kick that rattled off the top crossbar.

Reflecting on the momentum heading into the game, Collins said that the win streak was a move in the positive direction, but she hopes the team can improve after their weekend loss.

“We really started clicking, winning those four games, which was really awesome in-conference,” Collins said. “Going to this game out of conference, it was a good way to test us to see how we are. Definitely, [the game] showed us some spots that we can improve on and, hopefully, in-conference clean it up a little bit. But, overall, we are just working very hard, and we are making some really good steps forward.

The Owls now return to conference play. The team plays next Oct. 9 at 1 p.m. when they host the University of North Texas. Undefeated in their four games against Conference-USA opponents, the Owls hope to reharness that momentum as they enter a critical part of their schedule. The team, according to Lee, is still trying to get comfortable with each other as players make their way back from injury.