Doubles duo Diae and Maria look to build on No. 16 ranking 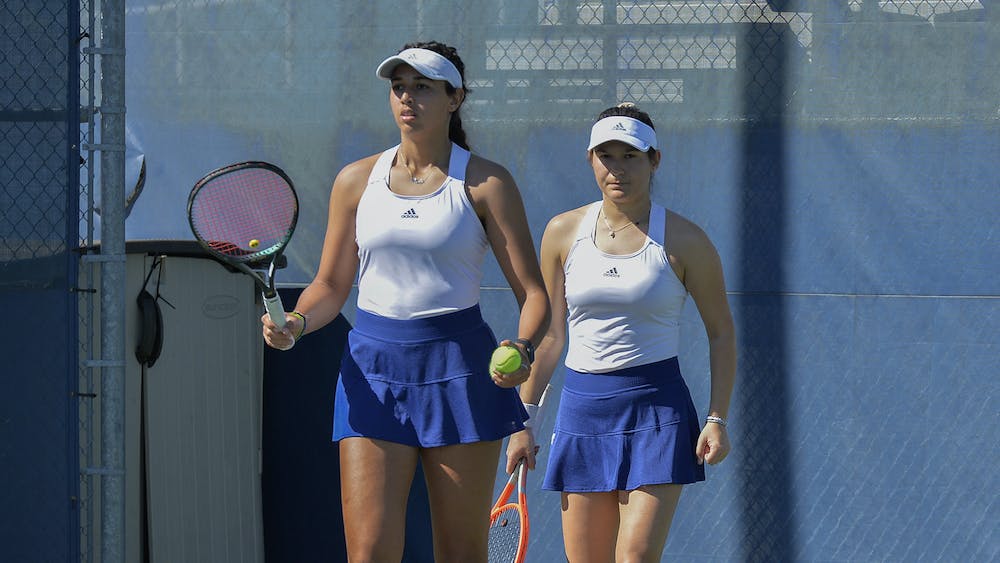 Hailing from Casablanca, Morocco, and Bristol, United Kingdom, fifth-year Diae El Jardi and senior Maria Budin have joined forces in Houston, Texas, to become the No. 16 doubles team in the country. The duo capped off an impressive season last year with a doubles record of 14-5, earning the No. 22 doubles ranking to finish the year and making it to the NCAA Women’s Doubles Championship. According to El Jardi, their first taste of the NCAA postseason was met with some initial nerves.

“It was a little nerve-wracking because it was the first time playing in the NCAA’s, and I feel like that kind of showed on the first set we played,” El Jardi said. “We were kind of stiff, but I feel like once we let out the nerves, we really just played our game, and we almost had them.”

Despite their postseason run last year, the duo’s recent success was not necessarily anticipated early on in their doubles careers. According to Budin, the coaches decided to stick with her partnership with El Jardi even when the results weren’t the best in the beginning.

“Even though initially we were solid, we weren’t showing super great results and we played lower in the lineup at the time,” Budin said. “We complement each other quite well with our games, and I think [the coaches] saw that, so they just trusted the process and kept us playing together.”

Before they started playing doubles together, Budin and El Jardin’s friendship began to bud off the court. According to Budin, their relationship off the court allowed them to find the right dynamic on it.

Fast forward to last year, the doubles team went 4-2 against ranked opponents, which included a victory over Texas A&M’s No. 3 doubles team in the nation. According to Budin, playing in high-pressure matches have helped the duo elevate their game.

“Diae has a very big serve, and I like to volley a lot, so I think that we have a very big advantage there, and we both feel very comfortable in that setup, and we’ve worked on that to make that even better over the years,” Budin said. “We’re very calm in big moments [because] we’ve played a lot of pressure matches and pressure situations over the years, and we’ve both done a good job of embracing it and not panicking in those situations.”

Unlike singles, doubles allows pairs to get creative in how they want to position themselves on the court to maximize each player’s strengths. According to head coach Elizabeth Schmidt, the duo poses problems for opponents because of their ability to play multiple formations.

“What’s unique about them is that they’re comfortable playing the Australian I formation, and because they’re comfortable being able to play different formations, they’re able to put themselves in a position to draw balls into their strengths,” Schmidt said. “They’re putting themselves in positions that lead to balls from their opponents coming into the ball they want to get [and] minimizing the tougher shots.”

The duo has improved their record from 5-4 to 14-5 over the past two seasons. According to El Jardi, their approach to the doubles game has changed from when they first started playing together.

“If we compare the way we played the first time to how we play now, you can definitely see a big difference.” El Jardi said. “Whereas before, we wouldn’t really think about a specific strategy to implement within the points, I feel like now we’re more aggressive and try all these different tactics.”

Budin and El Jardi will now look to defend their No. 16 ranking as they will be competing together at the ITA Women’s All-American Championships this week. According to Schmidt, she will be looking for her No. 1 doubles team to build upon their success from last year and have another successful season.