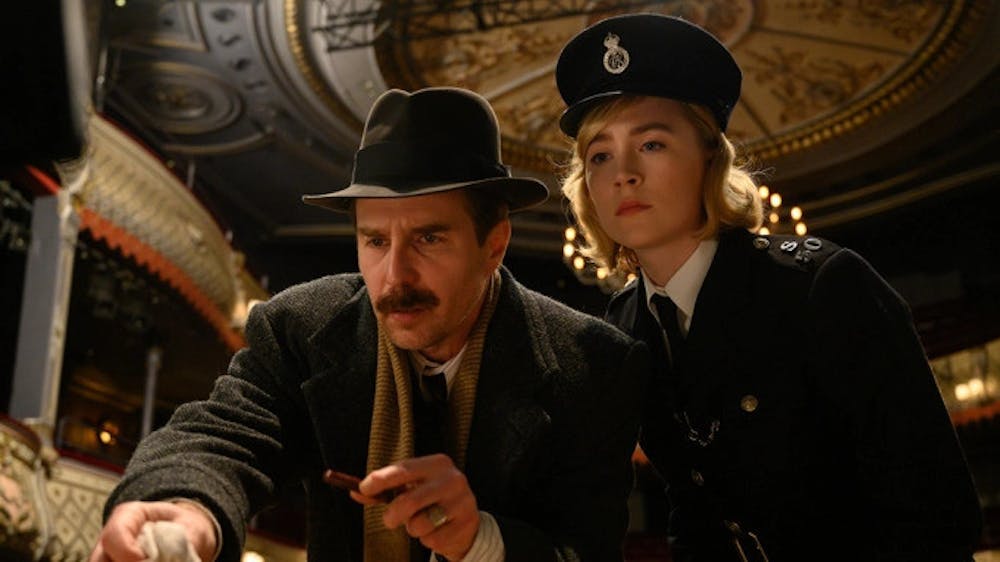 The premise for “See How They Run” is intentionally unremarkable. Sam Rockwell plays Inspector Stoppard, a grizzled detective tasked with solving the murder of American director Leo Kopernick (Adrien Brody). Stoppard is paired with Constable Stalker (Saoirse Ronan), a new and naïve member of the police force, to interview the various suspects surrounding the stage play and film adaptation. On paper, this setup sounds very by-the-book, but this pitch contains the film’s two greatest strengths: Constable Stalker and the meta elements of the story.

Starting with the former, Saoirse Ronan delivers the best performance in this film as Constable Stalker. As the name clearly indicates, the character is a very inquisitive and talkative character, taking notes on everything and often jumping to conclusions. Ronan’s delivery of her lines and movements sells the character as a very likable and funny person, which rounds out Rockwell’s gravely portrayal of  the older detective. Furthermore, Stalker’s character serves as the audience’s perspective as she voices what they’re thinking. Stalker brought up every possible theory that ran through my mind, making the solution feel satisfying as we reached it together. This also makes the film’s jokes funnier, since they felt like quips that any viewer might make.

The script’s use of meta elements also elevated the very basic mystery. Framing the whodunnit around a play of a whodunnit allowed the film to crack jokes at the expense of the genre and the characters that often exist within it. However, most jokes are not particularly original — most feel ordinary or tired — but they still land most of the time. However, The jokes don’t sufficiently distract from the plot holes in the mystery, which  can be easily picked apart upon closer consideration.

In the end, if “Knives Out” by way of Wes Anderson sounds like a good movie to you, you will probably enjoy “See How They Run.” The stylized visuals and dry humor are clearly indebted to the precedent Anderson established, though neither element in “See How They Run” is as strong. However, given that this film is Tom George’s directorial debut, this is by no means a criticism. Rather, it just signifies that he has room to grow and develop his own voice. The humor and plot aren’t perfect, but the film’s quirky and warm nature makes it a loving tribute to the whodunnit and a worthwhile trip to the theater.