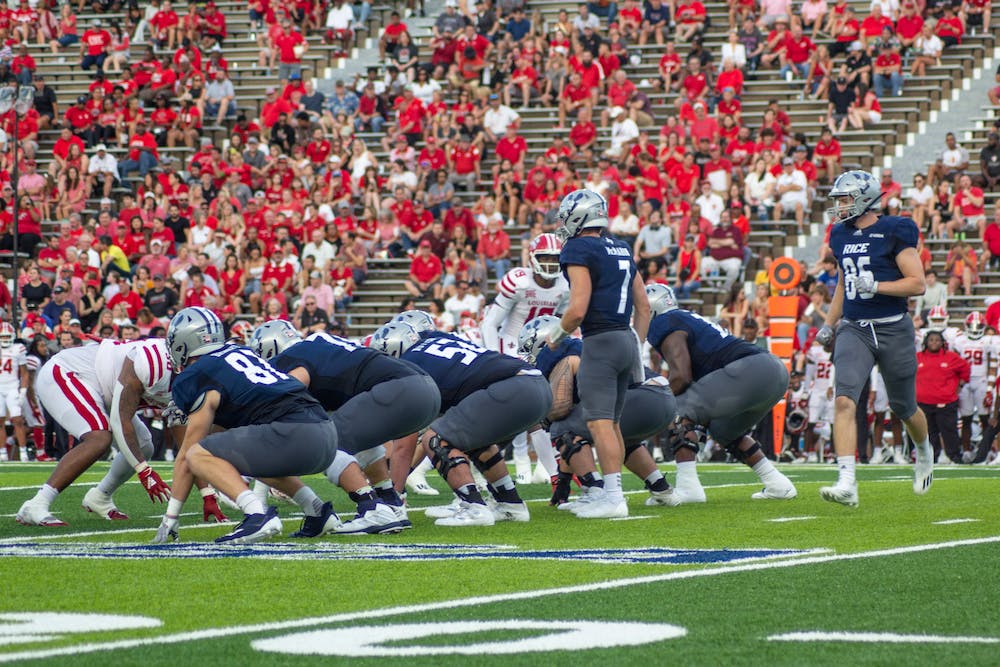 The Rice football team broke the nation’s longest winning streak when they defeated the University of Louisiana at Lafayette 33-21 on Saturday night. The Ragin’ Cajuns had won 15 straight games, going back to last season, before their trip to Rice Stadium over the weekend. The victory against the Ragin’ Cajuns puts the Owls at 2-1 on the season as they head into their last week of non-conference play. Head coach Mike Bloomgren said that the upset win felt like a reward for the hard work that he and his team have put in.

“It was a fun sideline to be on, and that locker room party was pretty cool,” Bloomgren said. “We have a lot of guys that can roll through and play good football. It feels great, it feels like there are a lot of people that did a lot of things for this program, and I’m glad that we got rewarded for it today.”

Both teams started slowly with the opening drives for each side ending in punts. However, the Owls capitalized on a first-quarter interception by graduate safety George Nyakwol, converting a 23-yard field goal after failing to get into the endzone. Louisiana then returned the favor later in the quarter, intercepting junior quarterback TJ McMahon’s pass and running it into the endzone for a Ragin’ Cajuns touchdown.

In the second quarter, the Owls went on an eight-minute drive that ended in a McMahon eight-yard touchdown pass to redshirt sophomore wide receiver Luke McCaffrey. The Ragin’ Cajuns scored another touchdown after McMahon threw his third interception of the first half, but the Owls’ two-minute drill got them into position to hit a 31-yard field goal, sending them into halftime down 14-13.

According to McMahon, who started in place of an injured Wiley Green, the support that his teammates and coaches gave him enabled him to bounce back in the second half despite his poor performance to start the game off.

“The coaches still had faith in me, they were calling plays and telling me that they trusted me in operating,” McMahon said. “Awesome teammates and awesome coaches are what helped me out.”

The Owls’ offense became much more active in the second half, scoring on their first possession of the third quarter on a McMahon touchdown pass to redshirt senior wide receiver, Bradley Rozner. The Owls opted to go for two but a failed conversion attempt left the score at 19-14. Another McMahon touchdown to McCaffrey at the start of the fourth quarter and a successful two-point conversion made the score 27-14. The Ragin’ Cajuns responded with a touchdown after putting together an efficient two-minute and eight-second drive in the fourth quarter to make the score 27-21. However, a two-yard touchdown run by redshirt junior running back Ari Broussard that gave the Owls a 33-21 lead with three minutes left sealed the game.

The Owls’ defense played a critical part in the team’s victory, giving the offense numerous opportunities to take the lead. Coming into the game averaging 416 yards of offense per game, the Ragin’ Cajuns managed only 175 total yards and nine first downs. According to Bloomgren, the defense made their mark known on every play.

“Defensively, I thought our defense got some really great push,” Bloomgren said. “Whether it was in our throw game to get pressure on our quarterback or the rushing game, I just felt like our guys were in the backfield all night long. I was always seeing all the guys, all over the place, all night long.”

Sophomore cornerback Jordan Dunbar, who tied for the team lead in total tackles with four, said that the defensive unit played with vigor and a strong mentality.

“We had so much energy on the defensive line, the linebackers and the secondary,” Dunbar said. “Everyone was working so well together. We had the same mentality to go out there and dominate while trusting our teammates to go out there and get the job done.”

McMahon said that he is not letting the win get to his head as he is aware of the tough schedule that awaits him and his squad.

“We have a lot more football left to play,” McMahon said. “We have to learn from the good, and especially the bad. We are going to be playing a lot of teams down the road where, if I have a first half like that, we are not going to be able to win those games.”