Not because it’s hard: Football beats FCS’s McNeese on the anniversary of JFK speech 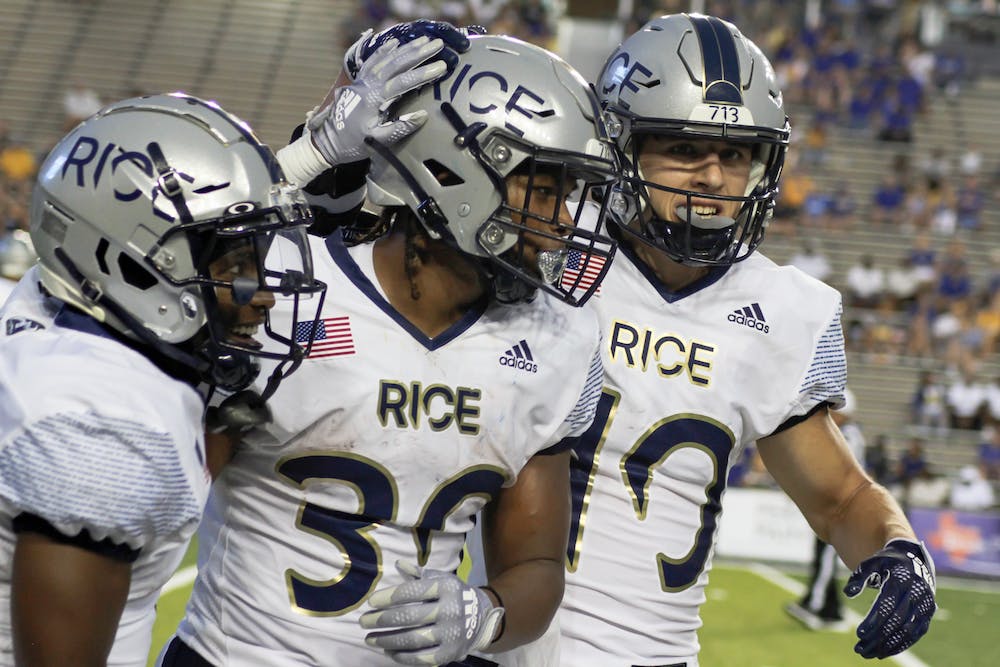 Rice football recorded their first win of the season last weekend when they defeated McNeese State University 52-10 in their home opener. The Owls are now 1-1 on the season, with Saturday’s win being a part of the festivities commemorating the 60th anniversary of John F. Kennedy’s speech at Rice Stadium. According to head coach Mike Bloomgren, the Owls played well against the Cowboys but are not close to their full potential.

“We are a talented football team, and there is no doubt about that, “ Bloomgren said. “[But] as good as this was in all three phases, it is nowhere near our best. Again, there is a lot to improve on this week, but this was a real step forward for our program.”

The Owls, who debuted space-themed uniforms featuring excerpts from Kennedy’s speech, controlled the game early on and maintained their advantage over the Cowboys throughout the rest of the game. The Owls’ offense was led by junior quarterback TJ McMahon, who made his first career start in place of redshirt junior Wiley Green, who injured his arm in the Owls’ first game of the year. McMahon had a career-high 274 yards and 4 touchdowns, while redshirt senior wide receiver Bradley Rozner led all receivers with 101 receiving yards on three receptions and two receiving touchdowns. Bloomgren said that he enjoyed watching McMahon extend plays and is excited to watch him improve.

“When TJ was able to get it going the way he did and keep plays alive with his arm and his feet, it was a lot of fun,” Bloomgren said. “There were a couple of throws that I think he wishes that he could have back and I know that he will hit those going forward, and that’s what I can’t wait for.”

The Owls got off to a slow start after receiving the opening kickoff as their first drive was stymied by the Cowboys, forcing the Owls to punt. However, after the first drive, the Owls’ offense woke up, scoring  on the following four possessions with three touchdowns and one field goal. In addition to the offense, the defense shut out the Cowboys in the first half, and sophomore Gabe Taylor returned an interception 91 yards for a touchdown. The Owls’ 31-0 halftime lead was their largest since 2016.

The Cowboys got to work quickly at the start of the second half, as running back Deonta McMahon split the defense for a touchdown 29 seconds into the half, making the score 31-7. However, McMahon responded immediately with a 75-yard touchdown pass to Rozner on the very next play from scrimmage, restoring the 31-point lead. From that point forward, the Owls scored two more touchdowns while only allowing a field goal. The Owls’ defense ended the day with five takeaways — two interceptions and three fumble recoveries — and recorded five sacks.According to Bloomgren, the defense did a very good job at thwarting the Cowboys’ offense but has room for improvement.

“The takeaways were amazing and they ended up being 1-10 on third downs,” Bloomgren said. “Those are numbers that statistically you should win with. I think it was pretty good and pretty dominant.  Still, there was a lot to improve on.”

McMahon was happy with his team’s result and emphasized the team effort that led to success in his first career Division I start.

“I couldn’t have asked for anything better,” McMahon said. “The offensive line did a great job protecting me, the receivers made plays for me, the running backs hit the holes hard and coaches dialed us plays to put us in successful situations.”

Going forward, Taylor said he understands the team faces a challenging schedule and believes that a strong defensive effort is necessary to win the upcoming games.

“It is going to be difficult to face Louisiana and Houston back-to-back,” Taylor said. “We know what we have to do and we just have to finish games. If we can do that, I feel like we can win the next two.”