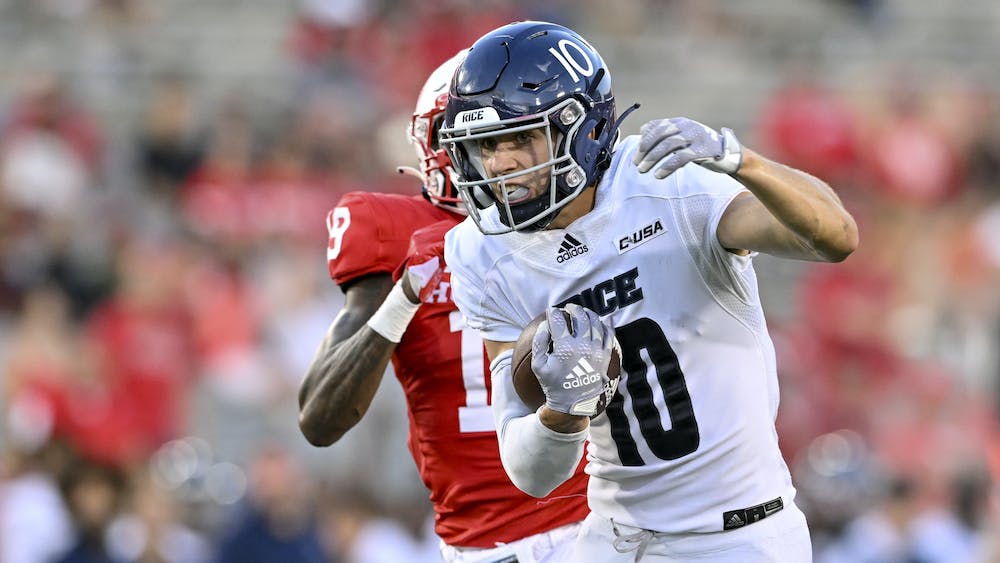 Losing a heartbreaker to their crosstown rivals, Bloomgren emphasized that his team was saddened by the end result of the game.

“It is no secret how bad they are hurting right now,” Bloomgren said. “They put a lot into this game, and when you sell out for something and it doesn’t go the way that you want it to, it hurts.”

The game started slowly, with both teams’ opening drives ending in punts. After going three-and-out on their second drive of the game, the Owls punted the ball to the Cougars who marched down the field and scored a touchdown to end the first quarter. Although the Owls were unable to respond immediately, a Cougar interception gave the Owls a short field and a four-play drive that culminated with a game-tying two-yard rushing touchdown by redshirt junior Ari Broussard.

The Owls’ defense forced a Cougar three-and-out on their very next drive, giving the ball right back to the Owls’ offense, who marched down the field thanks in part to a 34-yard run by sophomore wide receiver Kobie Campbell. A couple of plays later, Broussard scored his second touchdown of the day when he ran two yards into the endzone, giving the Owls a 14-7 lead. On their next possession, the Cougars drove down the field, but settled for a 37-yard field goal, cutting the Owls’ lead down to 14-10 at halftime.

The Cougars, who received the second-half kickoff, scored a touchdown in four plays and less than two minutes into the half. The Owls’ offense responded with a touchdown of their own after McMahon connected with McCaffrey on a deep 52-yard pass. This back-and-forth continued as the Cougars scored a touchdown on their next drive, giving them a 24-21 lead halfway through the third quarter. The Owls tied the game at 24 with a 42-yard field goal on their next possession.

The Owls’ defense came up big at the start of the fourth quarter, stopping the Cougars on a 4th and one. With the ball back, the offense converted their good field position into a 43-yard field goal and a 27-24 lead. The Cougars responded with a field goal of their own, tying the game at 27-27 with five minutes left to play in the game.

The Cougars’ defense forced a McMahon fumble a few plays later and took the ball in for a touchdown, giving the Cougars a 34-27 lead with just over three and a half minutes remaining. On their next possession, the Owls’ offense gave the ball right back to the Cougars when McMahon threw his first interception of the day.

The Owls’ defense forced a Cougar three-and-out, giving their offense one last opportunity with 24 seconds left. McMahon made several big throws, including a 51-yard Hail Mary pass to Bradley Rozner, putting the ball at the Cougars’ nine-yard line with just one second left. However, McMahon failed to connect with McCaffrey on the final play of the game, sealing the Cougars’ victory.

Bloomgren said that a handful of big plays by the Cougars at the end of the game made the ultimate difference.

“[They] made a couple more plays than we did in the fourth quarter,” Bloomgren said. “They had a couple of big third-down conversions, [pressured] the quarterback and found a way to win the game.”

The Owls start conference play next weekend when they host the University of Alabama at Birmingham Oct. 1 at 6:30 p.m. Despite the loss, junior linebacker Chris Conti, who racked up a team-high 11 total tackles against the Cougars, is keeping his head up and focusing on the next game.

“Next week is a new week. We are going to watch the film and let it go,” Conti said. “In college football, we can’t reflect on the past too much. We are going to come in … and work for the UAB game.”