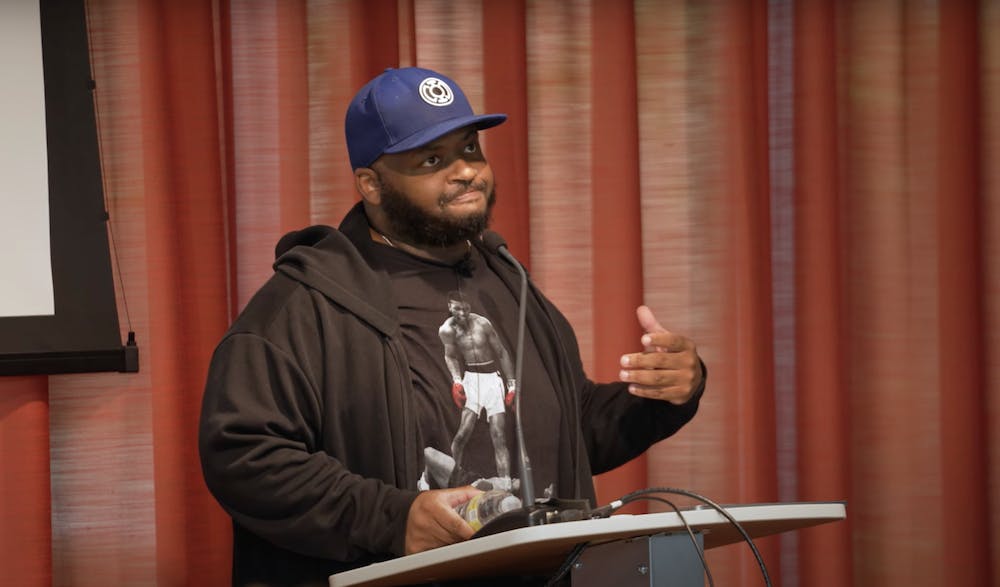 Kiese Laymon, a critically acclaimed essayist, hosted a book reading at Kraft Hall that featured an excerpt from his highly-anticipated upcoming release, “Good God,” which centers on themes of forgiveness and intimacy.

Hailing from Jackson, Mississippi, Laymon is the award-winning author of the essay collection “How to Slowly Kill Yourself and Others in America,” which was named as a New York Times notable book. Laymon’s bestselling memoir, “Heavy: An American Memoir,” received recognition from the 2019 Andrew Carnegie Medal for Excellence in Nonfiction, among a myriad of other awards. The audiobook, which was also read by Laymon, was named the Audible Audiobook of the Year in 2018.

The event featured his reading of a short excerpt, which was followed by refreshments and hors d’oeuvres.

“I hope folks started daydreaming about the stories they need or want to tell,” Laymon wrote in an email to the Thresher when prompted about what he hoped his readers would take away from the event. “I hope they listened to the brilliant folks in that room asking questions.”

On the topic of his upcoming release, “Good God,” Laymon shared what he hoped his readers would be receptive towards.

“I just want readers to be open to something really different structurally,” Laymon said. “It’s a long poem and a novel and a memoir anchored in the building of three essays during the pandemic. The most challenging part [of writing ‘Good God’] was publicly grieving immediate and inevitable death.”

Laymon said that one of his essays details the passing of his grandmother, who loved coloring even as her health began to deteriorate during the height of the pandemic.

“I’ve actually changed styles a lot since the pandemic started,” Laymon said. “The easiest part was really just trying to make this book feel good. Once I accepted that feeling good was actively going to be part of the process, it just made every day better.”

Laymon joined the Rice English department as the Libby Shearn Moody Professor of Creative Writing and English in January and has also been involved with Rice’s Center for African and African American Studies.

“The reputation of the students and faculty drew me to Rice. I feel like I’ve been headed to Houston my entire career, though I didn’t know it,” Laymon said. “I’ve taught at a few places where nothing just was expected of leadership. I think Rice leaders know that just love is expected. And when they refuse to justly love, I think they know they will be called to engage. This is rare and necessary.”

Laymon will be hosting another event at Brockman Hall for Opera Sept. 19 at 7:30 p.m. featuring a conversation with Nobel-Prize winning novelist Abdulrazak Gurnah following a reading from Gurnah’s new novel “Afterlives.”

“I’m so excited. I’ve been going through my questions the last two weeks,” Laymon said. “I mean, some writers create monuments with their work, these shiny things we’re supposed to gawk at. Gurnah creates movement. You can’t get swept up in simply watching. You have to participate in Gurnah’s book. The participation makes me feel like I’m a part of the movement.”