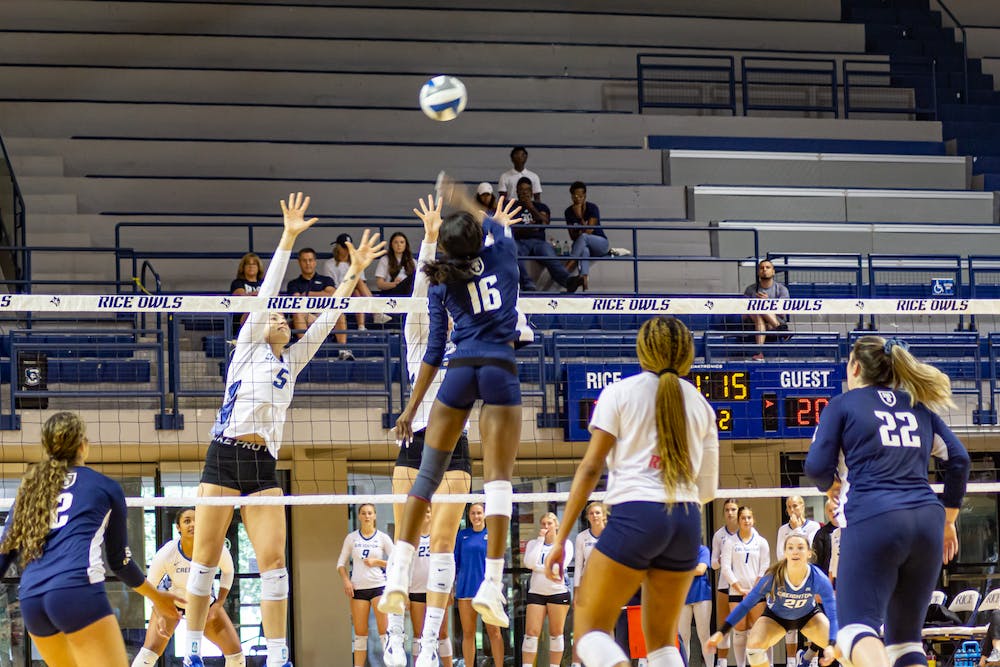 “We’re technically just supposed to be blocking,” Adekunle said. “That’s our job. We focus on a lot of defensive things and act like decoys on offensive. When the defense bites on us, it opens up other people to hit the ball freely. A lot of the time, the middles aren’t the ones getting the big kills like the outside hitters.”

But if there is anything that Adekunle is known for, it is her big kills that light up the arena. According to Adekunle, what really sets her game apart is her versatile offensive attack.

“Usually middle blockers run quick tempo balls and only hit middle position,” Adekunle said. “But I sometimes hit on the right side or … in the middle which is not very common for a middle blocker.”

Adekunle’s head coach, Genny Volpe, referred to her as “one of the most exciting, dynamic attackers in college volleyball,” claiming that “you often don’t see [these types of performances] from a middle blocker.”

Adekunle’s unique style of play has allowed her to etch her name into the school record books. Over her five years as an Owl, she holds Rice records in single-game and season hitting percentages; she also made the Conference USA First Team All-Conference in each of the past three seasons and was named the C-USA Tournament MVP in 2018. In 2021 and 2022, Adekunle earned an honor a bit more patriotic than the rest when she was selected to the U.S. Women’s Collegiate Volleyball National Team. As one of 35 players selected, along with her teammate, fifth-year setter Carly Graham, Adekunle said that suiting up alongside players that she would otherwise be competing against was an amazing experience.

“I loved getting an opportunity to play for the U.S. National team,” Adekunle said. “I got to meet so many people from different schools and walks of life. It was amazing to get to connect with those girls and also learn from them. It was also nice to be on the same side of the net as them.”

Adekunle said that part of what made the experience so rewarding was being able to work with highly decorated and respected coaches.

“I got to work with coach Karch [Kiraly], the [U.S. women’s national volleyball team] head coach, and was able to take away some great tips from the great coaches and Olympians there,” Adekunle said. “I tried to soak it all in and be a sponge, trying to take what they were saying and put it in my back pocket so that I can use it in games.”

Adekunle and the Owls have made the NCAA tournament in four straight seasons, and as her Rice career nears its end, Adekunle said that not only do they intend to make it five in a row, they hope to make a deep tournament run.

Currently in the first year of a two-year graduate program in global affairs, Adekunle is unsure of how her career as an Owl will end, but hopes to return to the national stage and represent her country as a professional volleyball player.

“I’m hoping to go pro and be able to play for the USA team again,” Adekunle said. “I’m still in the process of seeing how my Rice career will finish out, but it is definitely something I want and something I’m working toward. Being able to play for your country is one of the biggest honors you can get and I hope to continue to do so in the future.”