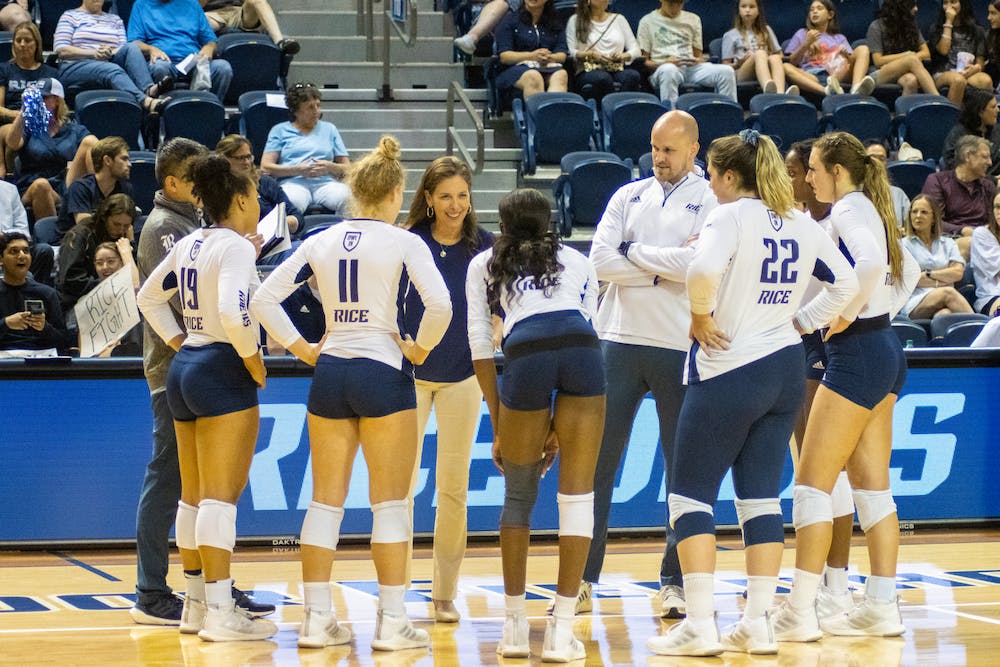 “It’s not one thing — building a program takes time,” Volpe said. “Rice is such a unique place, and we’ve worked really hard over the years to recruit the right players that fit Rice University in general. It’s taken time to develop a culture, develop a system. I really try to surround myself with great staff. I’ve had great assistant coaches … They’ve stayed a long time and worked well with me and with the players. [We’re] focusing more on the day-to-day teaching, getting players to buy in and not get frustrated when the process isn’t going super smooth. Our trust goes both ways — the players trusting the coaches about the process and the coaches trusting the players … that they’re giving it their all.”

Volpe’s players certainly share these feelings of trust and admiration. According to Carly Graham, a fifth-year senior and the Owls’ all-conference setter, Volpe’s empathetic coaching style and her ability to exist in the present moment are inspiring and worthy of learning from.

“Genny is truly one of the best coaches in the game,” Graham said. “She takes personal care for each person on the team and knows how to create a program where everyone is bought into the same common goal …  Genny is the type of coach that inspires everyone to work together and to work hard. Volleyball is a game of constant adjustments, and she is able to teach and coach how to feel and understand those adjustments the other side is trying to make.”

The Owls’ libero, junior Nia McCardell, echoes these praises, emphasizing Volpe’s skill at making improvements and corrections on the fly.

“I would describe Genny’s coaching style as very hands-on,” McCardell said. “She won’t hesitate to stop a drill to correct little things like technique to make sure we have something to focus on. In practices and games she is always engaged in the plays or drills and able to provide support or feedback if needed.”

Volpe began her collegiate volleyball career as a student-athlete at Texas A&M University, later serving as an assistant coach there and at Southern Methodist University. In her first season as Rice head coach, she saw the Owls to a 25-5 record and their first ever appearance in the NCAA tournament. That was also her only season in the Western Athletic Conference, with the 18 years of play from then to now occurring in Conference USA. Despite this long standing familiarity, Volpe shows little anxiety over the university’s switch to the American Athletic Conference in 2023.

“It’s just another league,” Volpe said. “We’re going to have some different opponents, but we’ve been through different schedules, we’ve been through COVID, so this is like nothing. The way we’re looking at next year in a new conference is new faces, new opportunities, new rivalries. We’re excited about the change … It’ll be an adjustment, but we also have a lot of young players who probably won’t even blink.”

It would be easy for a lesser coach to become absorbed in the dramatic idea of sending a message this particular season, at the end of the Owls’ nearly two-decade-long campaign in the C-USA. In Volpe’s case, however, nothing could be further from her mind.

“I really avoid talking about big endgames,” Volpe said. “I stopped doing that years ago. I think early in my career I was very much focused on the end rather than the progress. We haven’t even talked about ‘this is the last year of C-USA,’ ‘we’ve got to make a statement,’ nothing like that. And I think that’s key to our success because as soon as you start looking ahead, someone’s going to come up and bite you on the tail.”

It can be easy for figures that have enjoyed the level of success Volpe has to lose focus on the here-and-now. But instead of reveling in her brick-into-marble transformation of Rice volleyball, Volpe shows total lack of interest in any of those ideas of legacy.

“My goal has always been to be part of elevating Rice volleyball to new heights,” Volpe said. “It’s relationships that end up mattering more than anything to me, the relationships I’ve built with my staff, my players and my former players. What would give me the most joy is for everyone that’s played here at Rice to have a lot of pride.”