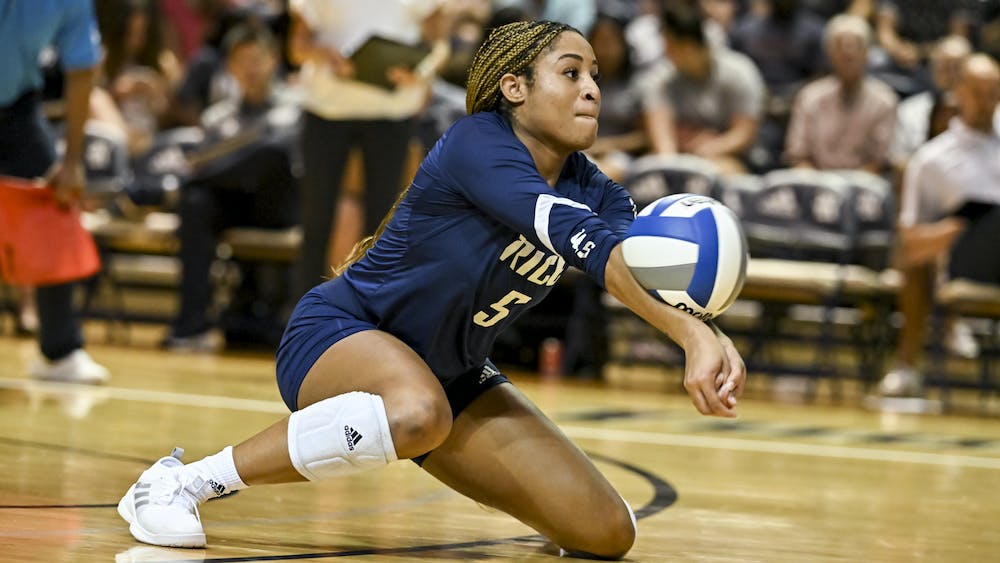 The Rice volleyball team didn’t let a double-header on Friday or an abysmal first set on Saturday phase them, as they started their season with three straight wins over the weekend at Louisiana State University’s Tiger Classic in Baton Rouge. The team opened the tournament with a pair of sweeps before fighting back for a 3-2 win over LSU to close out the weekend. According to head coach Genny Volpe, while their offense is still a work in progress, the team was strong in all other facets of the game.

“We are still working out our offensive rhythm but I was very pleased with our defense and serve receive for the most part,” Volpe said.

The Owls’ first game, against the University of Houston, was something of a logistical question mark as the two teams, normally less than four miles apart, traveled over 250 miles to face off at the Maravich Assembly Center. The first set was close throughout, as Rice never led by more than five points, but the Owls managed to win it by a score of 25-22. That would be the closest the Cougars got all night to securing a set. Rice won the second set 25-18 behind five kills from fifth-year senior middle blocker Anota Adekunle. The Owls repeated the trick in the third set behind another five kills from Adekunle and 15 assists from fifth-year senior Carly Graham to seal the win – the 350th of Volpe’s career.

The Owls took the court just three hours later against Samford University. Whatever fatigue the team might have had from the quick turnaround certainly didn’t show as they took a 10-1 lead and won the first set 25-15. According to Adekunle, the team had prepared for the double-header and managed to avoid its worst effects.

“It wasn’t as tiring as I expected it to be,” Adekunle said. “I felt really good physically after playing our last game Friday. I think the training we did in practice prepared us for that.”

The Bulldogs kept the second set close, getting out to a 17-12 lead at one point, but the Owls managed to come back behind a slew of late kills from sophomore outside hitter/right side Lola Foord. A dominant third set saw the Owls complete their second sweep of the day.

After winning their first six sets of the weekend, hosts LSU provided Rice with a bit of a shock when they won Saturday’s first set 25-13. According to Adekunle, the Owls were taken aback by LSU’s quick start, but once they settled into the match, they were able to take back the momentum.

“The game of volleyball is often a game of momentum,” Adekunle said. “LSU came out with so much fire, it just took us a minute to adjust to it. Bad sets happen all the time and unfortunately we were on that side of things.”

The Owls’ deficit didn’t last long however. Rice won the next two sets by 7 and 9 points respectively to take a 2-1 lead. The Tigers managed to force a fifth set, but three unanswered points from a 12-12 tie gave the Owls their third win in three tries. After the comeback win, Volpe said that the turnaround was more a result of the team’s composure than any tactical changes.

“[We made] no adjustments really,” Volpe said. “The team started out flat and so we just stayed committed to ourselves and trusted we would work out of it, which we did. The team stayed composed and settled in on our serve and pass game which made a big difference.”

On the weekend, junior outside hitter Sahara Maruska led the Owls in kills with 34, while Adekunle was a close second with 29. Graham, the team’s primary setter, contributed 102 assists while junior libero Nia McCardell earned Conference USA defensive player of the week honors for her 46 digs across the three games. According to Maruska, she is taking more of an active role in both the offense and the defense this season.

“Last year my role on the team was to go in the game and get as many kills as I could while I was in,” Maruska said. “This year I am playing defense in the back row and continuing to be a presence at the net on offense.”

Next up, the team heads to Eugene, Ore. for a pair of games – a Friday afternoon game against the University of California, Davis and a Saturday night game against No. 18 University of Oregon. As the season picks up, Maruska said she is confident that the Owls, who received the thirtieth most votes in this week’s American Volleyball Coaches Association rankings, will find its groove.

“I have so much confidence in this team,” Maruska said. “I think we have a very strong season ahead of us knowing that everyone will be firing on all cylinders in every game.”