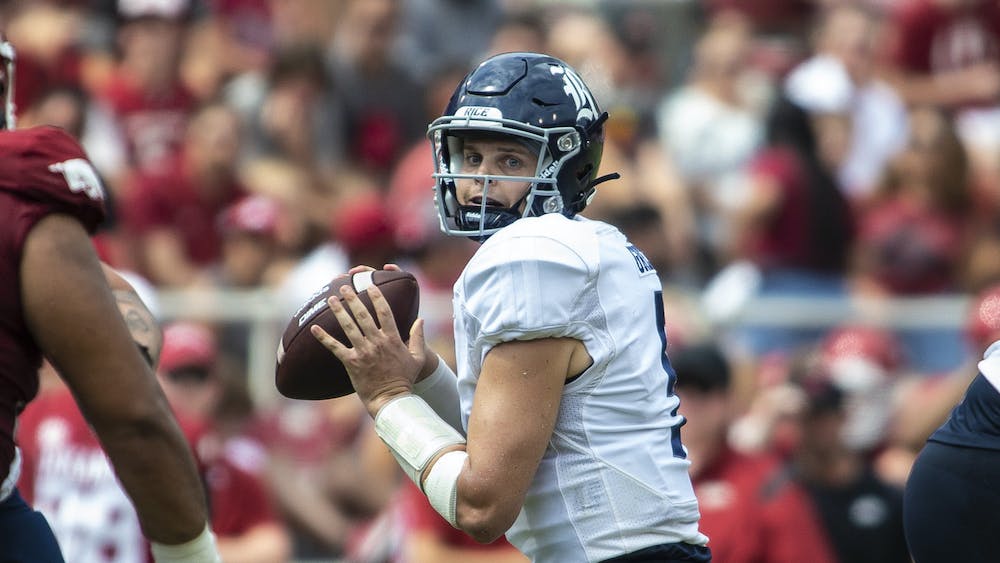 After practice Aug. 23, Rice football announced that No. 5 would be their QB1 for the start of the 2022 season. Wiley Green, an Irving, Texas native, who will start the Owls’ opener for the third time in his career, said that he is grateful for another opportunity in the starting role.

Green has been a student of the game since he was five years old. He played throughout high school for Prestonwood Christian Academy and was instrumental in his team’s success, leading them to a state title in 2017. When the college coaches started calling, Green said that he knew that Rice was the best fit all around.

“In my senior year, Rice gave me an offer,” Green said.  “I saw [Rice] as the best place for me academically and athletically so I decided to take that opportunity.”

In his first year donning blue and gray, Green made an immediate impact late in the season as he took over starting duties from then-starter Shawn Stankavage. According to Green, the biggest challenge that he faced jumping to the collegiate Division I level was the increased pace of the game.

“[My freshman] year was really up-tempo,” Green said. “You don’t really get to experience college speed until you play in college and it was something I had to get used to. I got a lot of good experience and it just helped me become the guy I am today.”

Green was named the starting quarterback going into his sophomore year, but struggled with injuries – including one against Wake Forest University that resulted in him being taken to the hospital – and was eventually replaced by then-graduate transfer Tom Stewart. On the year, Green started seven games and racked up over 1,000 passing yards. Green said that his trying season allowed him to grow both on and off the field.

“I grew up as a person,” Green said. “Going from 18 to 19 years old was a big step for me because I started to find out who I was mentally.  People don’t realize how much of a mental toll [football] can take on you. I battled through injuries that year but I learned a lot about college football from [that season].”

After being demoted to the third string quarterback in 2020, Green once again won the starting job to open the 2021 season. Green showed flashes, keeping the team within striking distance of the University of Arkansas for most of the opener, and leading them to an upset win over 24-point favorites in the University of Alabama at Birmingham.  In an all too familiar sequence of events, Green’s season was once again cut short when he went down with a leg injury against the University of North Texas. Green said that although the season was over for him, he was determined to get back to his former self.

Throughout the offseason, Green put in work to get back in shape and was rewarded by being named the starter. According to Green, the injury against UNT was very challenging mentally as he questioned his future in the sport. However, his faith and love for his teammates gave him the desire to come back better than ever.

“When it first happened, I was really contemplating if I wanted to continue playing,” Green said. “A lot of my friends from my class had decided to start in the real world… and it made me ask if I want to continue playing. But as I sat and watched spring practice, it really gave me that drive and that I wanted to come back better than ever. I also put a lot of that on my faith. As a Christian and as a believer, I put a lot of my burdens through God and I’m thankful to be back.”