One-pitch-wonder: Linskey and his fastball are giving batters fits 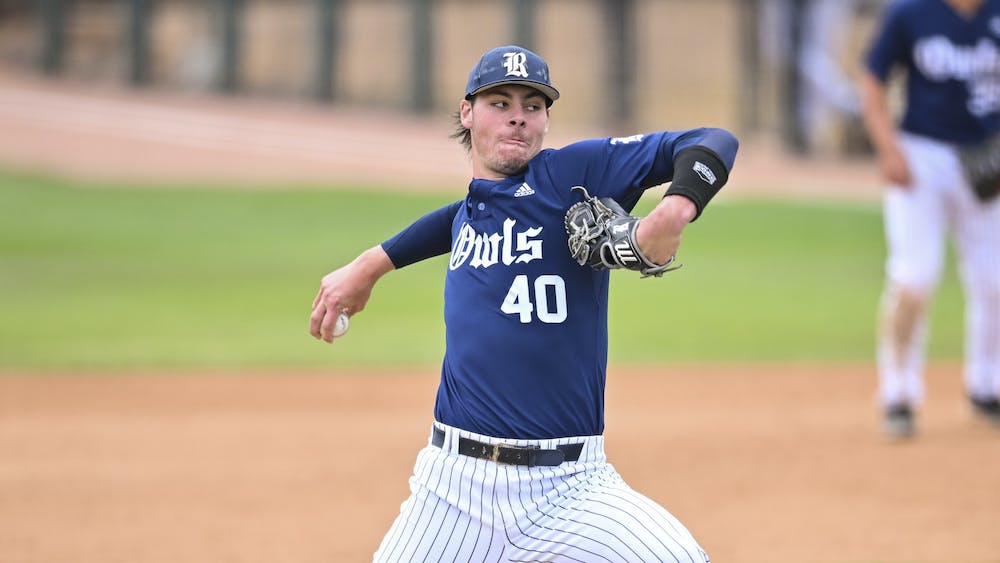 Last season, then-freshman pitcher Matthew Linskey allowed nine runs across 11.1 innings and walked more batters than he struck out. But lost in the shuffle was the fact that opponents weren’t hitting his fastball – Linskey allowed a batting average of .135 to opposing hitters, pacing the team by .65. According to Linskey, he knew he was closer to being a top pitcher than his 7.15 ERA would suggest.

“Last year I knew I was a good pitcher,” Linskey said. “There was just one or two limiting things – [mainly] throwing strikes.”

Now a sophomore, Linskey has made good on the potential he flashed last season. 34 games into this season, the 6’7” pitcher has yet to allow a single run. According to Linskey, a few mechanics tweaks have made all the difference in his game.

“Since I’m kind of a bigger guy, it’s harder to sync up my whole body,” Linskey said. “My arm falls behind when I land, so [the ball will] go inside, or high and in, because I’ll release it late. But working with [pitching coach] Colter [Bostick] this season I’ve fixed that and I’ve thrown a lot more strikes this year.”

Linskey primarily pitches out of the bullpen for the Owls. While he spent time as a starter in high school, Linskey said that being a reliever better suits his two-pitch repertoire.

“I kind of have a little bit of trouble stretching it out a little too far,” Linskey said. “Relieving is where I’m most effective since I only have two pitches, [a fastball and a curveball, while] starters usually have four or five.”

In his 13 relief appearances this year, Linskey has been missing bats at an astronomical rate. In just 14.2 innings, Linsey has struck out 34 batters, good for 2.3 per inning. He’s allowed just six hits and six walks, meaning he’s struck out 61 percent of the batters he’s faced. According to Linskey, he’s done that all primarily with one pitch – his 91-94 mile per hour fastball.

“I pitched against Louisiana Tech [on Sunday],” Linskey said. “I pitched three innings, I threw one curveball. I only throw fastballs.”

According to Linskey, while he throws fast, it’s not the speed of his fastball that’s been missing bats, it’s how the pitch fools batters.

“There’s something called vertical break, it’s kind of how much the ball moves,” Linskey said. “Mine doesn’t [dip] but it seems like it [is going to, and then it rises] because it has more vertical break than other pitchers.”

Linskey said he also spent the offseason improving his curveball. Even though Linskey rarely uses his secondary pitch, he said it plays a vital role in his ability to keep batters guessing.

While it’s not something that he thinks about too much, Linksey said that if he can keep up his success, he hopes to one day play professionally.

“I don’t know yet, but it’s always a goal,” Linskey said. “It’s something I want to strive for. It’s the one thing you think about growing up, of course I want to get drafted.”

If he is able to turn pro, he wouldn’t be the first one in his family to do so. According to Linskey, his dad pitched in the minor leagues and first inspired him to take up baseball.

“My dad played minor league baseball, I think [in] the early eighties,” Linskey said. “He got up to Double-A, Triple-A, stuff like that. Never really got to the major leagues. I wouldn’t say he pushed it, but I kind of grew up playing baseball [and] stuck with it and I liked it. I had a coach my whole life so that helped.”

Linskey, who is from nearby Humble, said that he was a regular at Reckling Park from a young age.

“I only live 45 minutes away, so I probably came to three or four games a year,” Linskey said. “They always won. So when I got offered by Rice, I was like, ‘yeah, sure, why not. It’s one of the best schools in the country and I’d love to play baseball there.’”

Since getting to Rice, Linskey has gone from a struggling bullpen arm to one of the premier pitchers in the conference. After his rocky first season, Linskey said that everything finally clicked for him this year.

“[By the fifth series of the season] against [the University of Alabama at Birmingham], I was like ‘yeah this is a pretty good season, I’m just going to keep on rolling, I’ve figured it out,’” Linskey said. “I felt like I’ve finally figured it out.”