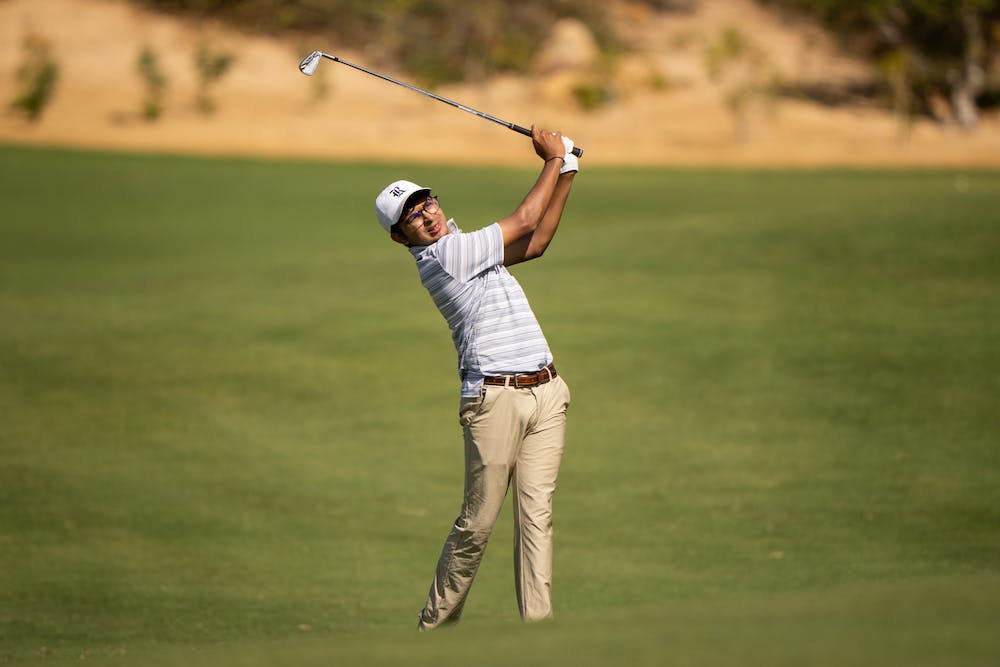 Two days after Scottie Scheffler donned the infamous green jacket by winning the 2022 Masters, the Rice Golf team took to the course to play in the Bayou City Collegiate Classic, their final tournament of the regular season. Over the course of two days, the Owls finished in sixth place out of 16 teams, ending the week 31 strokes over par. Following the tournament, head coach Justin Emil said he was pleased with how the team competed facing a tough course and weather conditions.

“The golf course that we played was very difficult,” Emil said. “It's narrow, there's an out-of-bounds on both sides of pretty much every hole. And on top of that the wind was blowing pretty hard. The winds on the first round were 20 to 30 and close to 40 miles per hour on parts of the golf course which made it pretty challenging but the guys held it together on the parts when the weather wasn’t cooperating and the golf course had the moth teeth.”

On day one, the Owls found themselves in sixth place at 23 over par, one stroke behind the fifth place Gamecocks of Jacksonville State University. Freshmen Raghav Chugh, coming off of a strong performance at the Sam Houston Dual Match, continued his streak of 13 straight rounds of par or better, shooting a 72 in the first round, followed by a 73 in the second, good for seventh place. Senior Jack Diamond followed close behind, shooting 75 and 71 in the opening two rounds to put him in eight place. Emil said he was pleased with how his top two scorers performed.

“Chugh played really well,” Emil said. “He's got a nice streak of top-10s going this spring and [is] really playing well. He’s definitely due for a breakout performance and can finish first in a tournament very soon. Jack Diamond has been out of the lineup for most of the spring and came in and…had two really solid rounds for us.”

On day two, Chugh continued his strong performance shooting a 72 even par to tie for fifth place, finishing the tournament one stroke over par. Diamond and senior Jake Benson joined Chugh in the top-30 at the end of Tuesday, finishing no. 22  and no. 26, respectively. According to Emil, the team didn't play their best golf but competed well throughout.

“Overally, we didn't play great but we didn't play bad either,” Emil said. “We hung in there and beat a bunch of teams which was a similar performance to the one we had down in Gulf Shores, Alabama where we didn’t [play our best] but we picked off some teams.”

The highlight of the meet was Chugh's performance, adding on to his impressive freshman season. Emil said that he is very impressed with how Chugh has embraced the challenges of being a freshman student athlete and risen to lead the team tournament after tournament.

“[Chugh] is a 24 hour flight away from home, in New Delhi, India,” Emil said. “It’s a lot different here than it is there. His first semester in the fall was a bit of an adjustment period. He played well in a few events [in the fall] … and now in the spring, he keeps getting better and better. It's tough for a freshman to be the guy every week that everybody depends on to lead the ship but he's doing a really good job right now and I see him continuing to get better.”

The Owls sixth place tied for their second best result of the season, behind only their tie for second place at the Bentwater Intercollegiate Tournament hosted by Sam Houston State University in October. Just last week, the Owls defeated the Bearkats at the Sam Houston Dual Match which according to Emil is a big confidence booster going into Monday.

“Sam Houston’s a really good team,” Emil said. “We've played against them a lot this year. They've beaten us, we've beaten them but to go out on a golf course that they’ve played multiple times and beat them, I think that was a huge confidence booster.”

The end of the regular season means that the Conference USA championship is right around the corner. With two weeks until the tournament and without a set lineup, Emil said that the Owls’ preparation between now and then will be crucial to the team’s success.

“I’d like to select the lineup for conference really soon,” Emil said. “We take a sixth player which is a unique opportunity to protect your team in case someone gets sick or injured or if someone is having a tough week and not clicking on all cylinders. Also, as much time as we can spend playing and competing on different golf courses is really important. Over the next two weeks we're going to get out and play, working on putting the golf ball in position, cleaning up off the tee and being really sharp with our short game because Texarkana is a really demanding [course]. Its a golf course we know well and we know the challenges we are going to face there so it's nice to have a couple of weeks to prepare.”

The Owls will return to action on April 25 when they travel to Texarkana, Arkansas for the 2022 C-USA championships.