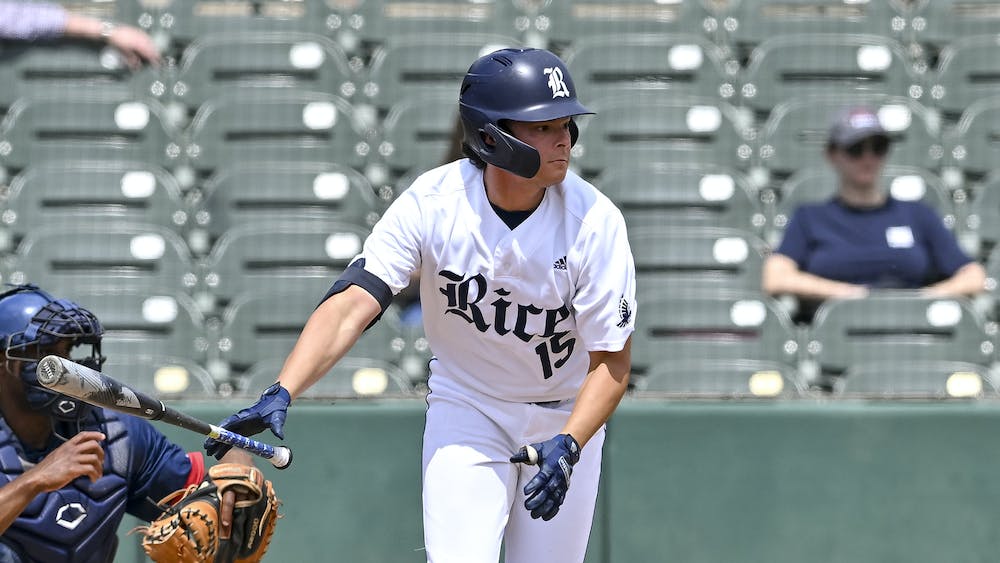 The Rice baseball team was swept by Louisiana Tech University last weekend in Ruston, LA. Losing all of their games against the No. 2 ranked team in Conference USA, the Owls fell 5-3 on Friday, 9-3 on Saturday and 3-1 on Sunday. After this weekend’s matchup against the Bulldogs, the Owls overall record sits at 9-24. with a 3-9 record against conference opponents.

According to first-year head coach Jose Cruz Jr., despite the series sweep, the Owls played competitively and he has an overall positive outlook on the rest of the season.

In the first game of the series, the Bulldogs pulled out to a 3-0 lead through the first six innings of play. Sophomore infielder Jack Riedel led the Owls’ comeback effort in the top of the seventh as his two-run homer tied the game up. However, the Bulldogs responded with a go-ahead two-run home run in the bottom of the eighth, which ended up being the difference-maker.

The Owls jumped out to an early 3-0 lead in their second game against the Bulldogs behind another two-run home run from Riedel in the top of the third and an RBI double by senior infielder Austin Bulman. However, the narrative of the game shifted after that as the Bulldogs scored nine times in the final four innings of the game while the Owls were held scoreless.

According to Cruz, Saturday afternoon’s game got off to a good start with a strong pitching performance by senior pitcher Alex DeLeon, but the game was out of reach after the Bulldogs’ strong offensive push in the fifth.

“DeLeon pitched very well,” Cruz said. “We had just an unfortunate series of events in the fifth inning where they ended up scoring four runs.”

The last game of the series started off with the Bulldogs storming out to an early 3-0 lead due to a two-run first inning and a solo home run in the third. The Bulldogs stymied the Owls’ comeback efforts, keeping them scoreless through eight innings. The Owls wasted several scoring opportunities to get on the board, leaving six players on base during the game. They made their first mark on the scoreboard in the top of the ninth when sophomore infielder Pierce Gallo grounded out to score Bulman. However, despite the late attempt at a comeback, the Bulldogs were able to close out the game to complete the sweep.

Riedel ended his weekend with six hits on 12 plate appearances along with two home runs and four RBIs. According to Riedel, his only goal was to swing at the best pitch that he found and set the tone on offense.

“My goal was just to help the team,” Riedel said. “I was in the leadoff spot the first two games. I just tried to set the tone and once my time came around the next time in the lineup, I just tried to get a good pitch and swing.”

According to sophomore pitcher Matthew Linskey, the pitching was very positive this weekend with the starters limiting the Bulldogs’ offense.

“It was a close series, I think we put up a really competitive three games,” Linskey said. “Our starters did a lot, they improved a lot this weekend. I think [graduate student pitcher] Cooper [Chandler] went six innings with three runs given up. DeLeon went [four] innings with one run given up and [sophomore pitcher Thomas] Burbank went three [runs] in five [innings]. It was just one or two home runs at the end that somehow they pieced out of our bullpen that just gave them a small lead.”

Overall, according to Linskey, the Owls have a positive outlook on the rest of the season, but could improve by making an earlier offensive impact and limiting damage at the end of games.

“We’re so much better of a team than we were at the beginning of the season,” Linskey said. “So I think it’s coming together. It came up as three losses but it was three competitive games against the best team in our conference. [We need to improve on] scoring earlier and limiting the last damaging runs that they put on us”

After their road-trip, the Owls will return to Reckling Park to host the University of Texas, San Antonio this upcoming weekend. The Owls will look to break their seven game losing streak against C-USA opponents with the first game of the series starting at 6:30 p.m. on Friday, April 15.