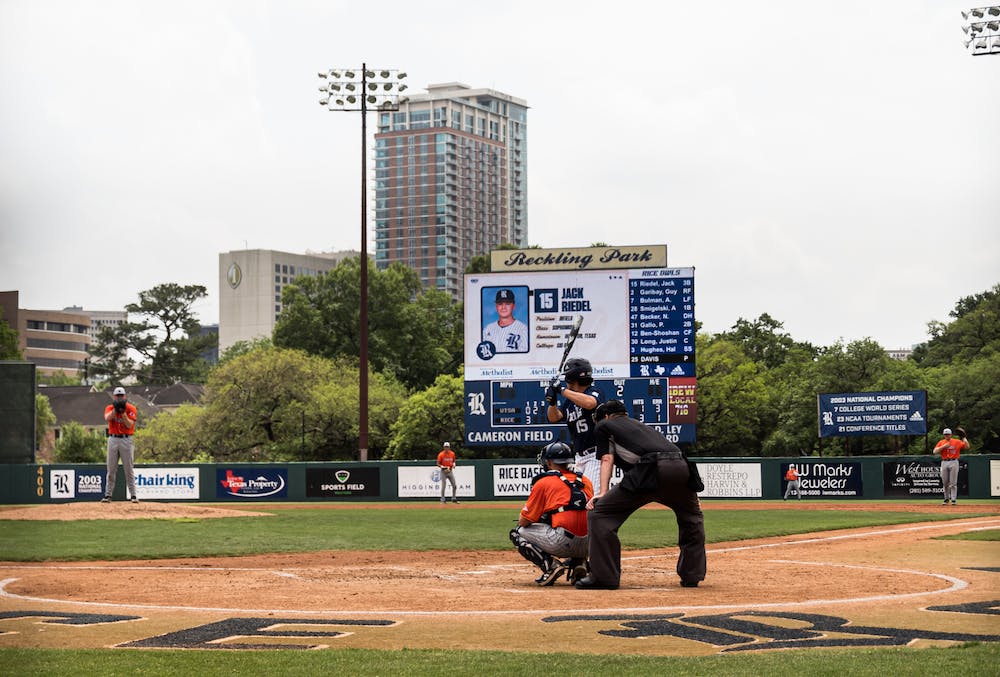 After dropping the first two games of their weekend series against the University of Texas, San Antonio, the Rice baseball team erupted for 16 runs in the finale on Sunday to end the series on a high note. Rice fell 9-2 on Friday and 15-4 on Saturday before winning Easter Sunday’s series finale 16-7. After this weekend’s series against the Roadrunners, the Owls’ overall record sits at 11-26 with a Conference USA record of 4-11. According to sophomore infielder Pierce Gallo, the team’s response to the two tough losses showed a lot of character.

“It shows our grit, it shows our toughness,” Gallo said. “We got punched in the mouth but we got right back up and threw a bigger punch ourselves. We didn’t let the pressure get to us.”

In the first game of the series, UTSA got out to an early lead by scoring four runs in the second inning, including a three-run home run by Jonathan Tapia. The Roadrunners added a solo home run the next inning to extend their lead to five.

In the fifth inning, sophomore outfielder Guy Garibay Jr. doubled home two runs for the Owls, to make the score 5-2. Later, down 7-2 in the eighth inning, Rice threatened to make it a game by loading the bases with two outs, putting the tying run on deck, but the Roadrunners got out of the jam, before adding two more runs to seal the 9-2 win.

On Saturday afternoon, UTSA scored in bunches to comfortably beat the Owls. The Roadrunners started the scoring in the second inning as Ian Bailey led off with a double and was later brought in with a sacrifice fly by Chase Keng. The next inning, the Owls took advantage of some defensive miscues by UTSA to strike back. With one out, freshman catcher Manny Garza singled, sophomore infielder Jack Reidel walked, and Gallo singled to load the bases. Then Garibay drove in Garza on a fielder’s choice but a throwing error by UTSA scored another run for the Owls. Freshman infielder Aaron Smigelski followed with a grounder that got under the first baseman’s glove to score Garibay making the score 3-1.

But UTSA answered immediately with six runs in the fourth inning to take back the lead. The Roadrunners added one in the sixth, two in the seventh and scored five times in the eighth to put the game out of reach, winning 15-4.

The Owls started off the series finale by taking advantage of three UTSA errors in the first inning to get out to an early 3-0 lead. After UTSA scored a pair of runs to cut the lead to one in the second, the Owls answered with a pair of runs of their own in the third to make their lead 5-2. The Roadrunners forced an early exit for sophomore starting pitcher Thomas Burbank, but junior pitcher Brandon Deskins came in with the tying run at the plate and stopped the rally. Deskins kept UTSA off the scoreboard through the seventh inning to pick up the win. The Roadrunners picked up four runs in the eighth off of sophomore pitcher Matthew Linskey — who had yet to give up a run all year going into the game — to cut the lead to 9-7. But the Owls answered right back with seven runs in the bottom of the inning to take control of the game.

According to head coach Jose Cruz Jr., this was an important win to close out the series, despite losing the first two games.

“It was a very big win for us,” Cruz said. “We needed to win, we needed to beat a very formidable opponent and UTSA is that.”

Cruz said he was very pleased about the strong outing from Deskins, who helped seal the Owls’ win.

“Deskins came in and gave a great performance,” Cruz said. “In my opinion probably the best of the year. He was very dominant today.”

Gallo ended Sunday with four hits and four RBIs. According to Gallo, Sunday’s win showed their improved culture and was important for building the team’s confidence.

“It was our goal to come out today and take one and gain some momentum going into next week,” Gallo said. “I thought we played really well. Our bats came alive, pitching was great, and we stayed together the whole game so that was really important and I’m happy with the direction we’re going. “

One of the biggest moments of the game was the way the Owls responded to UTSA’s four run eighth inning by scoring seven runs to seal the game. According to Cruz, this was an important step for his team.

“When they scored those runs in the eighth [inning], for us to be able to come back and answer that was really really good,” Cruz said. “It was one of the times this year that I can remember that we needed to put pressure on them and we did and we ended up scoring a bunch of runs and taking control of the game.”

The Owls travel to Hattiesburg, MS this weekend for a series with the first place University of Southern Mississippi. Game one of the series starts Friday, April 22 at 6 p.m.